A lot of my short story ideas and even novel ideas are essentially about being a creature or a certain kind of person or a monster or a machine in a time and place. For instance, I have long wanted to write an epic novel, or script an epic graphic novel, about what I call The Ancestor Fish. The Ancestor Fish is the first one that crawled out onto land and stayed there. What would the story be about? Well I guess it would be about the life the fish had before, in the water -- how he ate bugs and whatever, and how they looked in the water, and how a fish might sort of half feel about seeing those bugs and eating them, and the barrier reefs, and whale carcasses, and so on. Then it would be about what it was like to crawl onto land. This wouldn't take very long but it would have a lot of air in it -- a lot of space for you to breathe, and feel The Ancestor Fish breathing, and know what a momentous occasion this is. Then it would be about life on the land. It would be about the plants that he saw and the other animals -- new kinds of bugs, worms, fruit, big trees, ivy, and so on. It would probably be sort of psychedelic.


What would the sentences be like, though? This is where a lot of my ideas run into trouble. The sentences would suck. I mean they would be glorious at first, but after page twenty the descriptions of rocks and rotting logs and fish and bugs and so on would get pretty old. There wouldn't be conflict of the sort that makes books interesting to read -- things would try to eat him and nature would be against him, sure, but A) we're basically waiting for The Ancestor Fish to do it with another fish, thus confirming that he's our great grandfather, and B) you can't read about nature trying to kill a slow-moving fish for too long without getting terribly bored, I think.

Now there are days the challenges of stories like this make me think I should take on the dragon, as it were, and just go for it. There's nothing at risk but the time I might waste trying, after all. But often I realize what I'm really doing is designing video games, which are, much more than stories, about being a person or a creature or a monster in a time and a place. (Movies do this too, but for some ways of being more than others.) The Ancestor Fish could be, in the right hands, a really excellent platformer. The fish would have to be somewhat unrealistically mobile. Maybe there would be segments of levels where you swim really beautifully and then segments where you're totally out of the water, which are thrilling and important but also very dangerous. It would play like the first two Oddworld games, where your character is mostly trying to survive despite his very real limitations. You would spend a lot of time desperately outrunning things, and some time just walking through the jungle or swimming around, seeing the sights. Maybe you could try to bring other fish onto the land with you. Maybe you would have to save them from something. Given the right character designs -- I'd like to see the studio behind the 2D Rayman games give it a shot -- I think it would be a lot of fun.

Maybe sometime we'll talk more about my game ideas. But today we're talking about Dino Run. Dino Run is an excellent game about being a dinosaur in a time and a place. It's about as close as anything I've seen to The Ancestor Fish. And I've spent way too much time playing it. 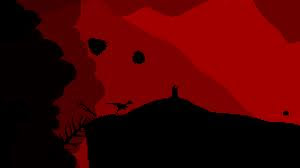 When you start Dino Run your dino, a velociraptor, is facing left. This is weird. In video games this is the wrong way. If you play a lot of video games, and maybe even if you don't, you understand this instinctively, and so you hold down the right arrow. You figure out pretty quickly that you can jump with the up arrow. Down, less intuitively, allows you to duck and eat critters and magical power-up flowers, all of which help you run faster. Why are you running? There are two answers to this question.

One is that running to the right is just sort of what you do in a 2D video game. Another is that the music implies you should definitely be doing something, and, well, these are the buttons you've got. If you could find the "dino ray gun" button you'd probably press that too. Playing a video game for the first time, or coming back to it after a long break, is like being born. You're in this new, unfamiliar place with a new, unfamiliar body you only sort of recognize as yours. You start waving your arms around because you can. You start kicking your legs. You breathe, if you can breathe, because you can breathe. You scream because you can scream.

The best video games will generally give you a way of experiencing this moment pretty purely, because they understand intuitively its power. In Mario, you jump because you've got the A button. The fact that you'll die if you don't is sort of a secondary concern. You figure out pretty quickly that you can hold B to run because you've got to be able to do something with that button and the power flower is a long time coming.

And if you don't run in Dino Run? Well, pretty soon you start to hear this rumbling like a waterfall made of lightning and mud. The sky turns red. Things get dark. You see a wave of something -- of dust, of meteors, of black, annihilating -- rushing toward you. So that's what your dino was looking at when he started facing left. You understand that you were born into this dinosaur in a moment of hesitation -- a moment where he turned back and looked at the end of the world and asked himself if it could really be so bad. Your job is to get that dinosaur out of that moment. If you still don't move, this wave of stuff passes you. When the screen turns wholly black, you're dead, or rather, as the game would have it, "Doomed." At this point you understand that for the entire course of the game you will either be running or dying. So you start over. You start running.

The levels in this game are great in that they don't look very much like levels -- they look like places a dinosaur like yours might be. Your greatest enemies in this game are steep hills and big rocks. Not the big rocks that fall from the sky -- those aren't actually usually much of a problem, though they do certainly improve the atmosphere and up the stakes. No, I mean rocks that don't move. Your job in this game, as a person being a dinosaur running from doom, is to maintain momentum. Running up hills or big rocks kills you rmomentum -- when possible, you want to eat worms or small lizards or birds or magic flowers so you can climb more quickly, and you want to jump up the hills where you can. You spend a lot of time in this game hanging in mid-air. It may be that you get a boost if you duck as you hit the ground. I'm not sure.

You can explore the levels searching for eggs (supposedly you rescue these -- I think it's clear you're eating them) if you can get far enough ahead of the apocalypse. This is always a very tense decision. When you "rescue" eggs, you earn DNA, which can be used to improve your dinosaur's speed, acceleration, jumping, and strength. This is your incentive to play the game again. It starts out fairly difficult. It gets easier (though not that much easier) as your dinosaur gets stronger and faster. Most of the time, though, you're focused on running. The music tells you that you're going to die. The other dinosaurs running with you or flying away (some faster, some slow enough that you know they'll die soon) tell you that you're going to die. Trees collapse under your feet. Slow dinosaurs get in your way. You find a brontosaurus sunken in tar, where it will die. You run along its back. If you aren't fast enough, you'll watch the brontosaurus die. You'll keep running. 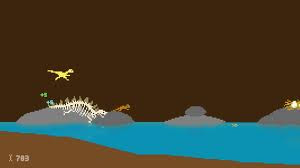 In workshop a professor once argued that you can't have a story that's just about someone trying to survive -- someone trying to eat, to find water, to satisfy their basic needs and urges. I think that the best stories are often about this. But it's hard to tell that story in a book. Most of those that try are adventure stories for young boys. Their lesson is that you can, through sufficient ingenuity, survive anything. This is a lie but it's a good way to feel about the world sometimes and it can make for a pretty good story. More difficult is the story likely to end in doom -- the apocalypse that really does end the world, and the story about living within it. The Road pulled this off. (In fact I love The Road.) Generally video games are better for stories about running and eating to stay alive. This is, after all, the story of Pac-Man. Death is chasing you down a narrow corridor. You're eating pellets because it gets you points, because it brings you pleasure. Sometimes you eat a big pellet and you can chase death away for a while. This is analogous to the feeling of immortality that comes during a great meal, or when you're holding someone close, or when you've just accomplished a life goal. The end of that safe period is analogous to the ends of those moments, those meals. Death comes at you harder and faster than ever. Eventually you die.


Note: This video features not-very-good music that isn't from the game, which is a mistake, because the game's music is great. I just really like watching this guy doom surf.
Posted by Mike Meginnis