So right now I am pretty much completely obsessed with Sleep is Death. This in spite of the fact that I have yet to play it, or even quite figure out how it works. This slideshow explains the concept pretty well, but basically Jason Rohrer (best known as the creator of Passage) has come up with a pretty ingenious solution for the crappiness of video game storytelling: make a two-player game, with one player being the storyteller, and the other being the story's protagonist. These two people collaborate using the game to tell a story. 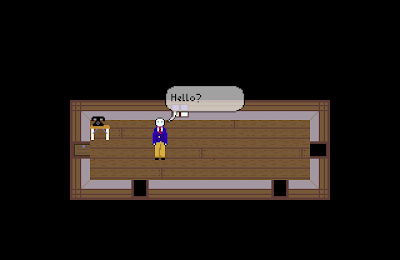 The vague notion of it sounds pretty nice, but with something like this it all comes down to the specific, pragmatic solutions to a series of problems. Rohrer's solutions seem pretty great. The basic units of the game are "rooms" and "objects." (Characters are a type of object.) Objects can be moved around and altered freely by the storyteller, both in preparation for a story (think of this as building sets for a play) and on the fly during a story. The storyteller can also make characters (or objects, or thin air) speak, and provide captions. The player, meanwhile, can move, speak, and enter a verb (such as "take" or "eat" or "shoot") in reference to any object in the room. It's the storyteller's responsibility to render that action as best he or she can, or to create a good reason within the universe for it not to happen. Within these basic rules, the two players improvise, testing each other's limits and collaborating in the creation of a story.

How does Rohrer avoid chaos? The players take turns. The storyteller builds a world in advance, and then the player lives in that world for a while, while the storyteller works to tell a satisfying story while respecting the player's agency and maintaining the illusion of the world. The default setting for the game gives both parties only thirty seconds each, allowing players time to consider their options but also requiring a certain amount of spontaneity and therefore immersion/role-playing, and offering storytellers just enough time to (generally) keep all the balls in the air. You can (and probably should, at the beginning) lengthen the turns to let everyone get their sea legs, however.

Sleep is Death is designed for minimalist storytelling. The game is very low-res so that players with little artistic experience and ability can easily create their own assets for storytelling (as will be necessary for almost any ambitious storytellers), and it includes a simple and easy-to-use sprite editor to allow you to create and edit characters. The game is flexible enough, however, to accommodate a wide range of art styles and many levels of sophistication. Meanwhile, if you genuinely can't wrap your head around making characters and world assets, you can stick to the defaults, download resource packages from sidtube, or just use what you get by playing the game: every time someone tells you a story, they automatically transmit all the assets they used to your computer.

There's even an internal music editor with what looks to be a surprising amount of flexibility. 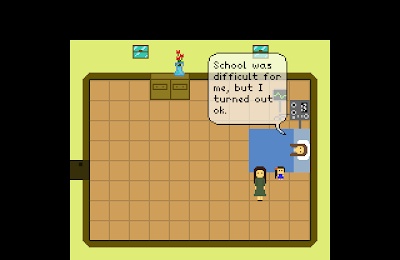 When I saw the press for this game I was immediately thrilled by its potential. I knew I would buy it. The little pixel people that populate the world are charming and eerie -- barely representative and iconic at the same time, the way Mario looks nothing like a plumber or even a person but looks immediately like Mario. I don't think it's only nostalgia that makes me think the low-res art style Rohrer uses is inherently emotionally involving; the sight of a human figure created with such stark and immediately identifiable limitations is engaging. I've written here before about the centrality of limitations and repetition to my favorite art; this aesthetic takes that obsession to an extreme. When everything is built from boxes, that can be truly beautiful. A storytelling medium that forces us to work in the visual grammar of video games is, to me, an exciting prospect. And I don't think it's going too far at all to call this a medium.

Probably the biggest disappointment for me has been reading other people's stories. I have no idea if the stories being posted to sidtube are representative, but if they are it's really too bad. Little Big Planet taught us that when faced with the opportunity to create their own art, gamers will usually begin by replicating preexisting games and writing what amounts to fanfiction, so I shouldn't be surprised that's where we are right now, but, well, that's where we are. I've read about players replicating first person shooters somehow in the game (I can imagine how you would do this, but it's idiotic) which makes me sort of want to cry for how hard it misses the point. Other stories are somewhat more original but basically just wacky and, honestly, pretty stupid. Still others try to create a sort of cinematic experience, which is fine, but a strange way to use a game designed to get around the problems that created cinematic gameplay in the first place -- that is, if you're looking for a scripted, pre-generated experience, you can play Final Fantasy. It's way more pretty! 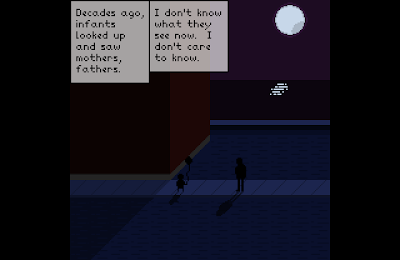 It's not too hard to imagine better stories. Two of the example stories at Rohrer's site strike me as especially promising. This first one is the sort of simple, moody story I hope to make myself. The atmosphere is great, and the simplicity of the staging is very effective, which are great starts, but it also takes advantage of the form in several interesting ways. From a novelist's perspective, games are generally told in the second and first person -- that is, you are the person "addressed" very directly by the game, but you are also its author and primary agent: the "I." In this story, the storyteller has taken the position of the "I," informing the player through text boxes what (some of) his thoughts are; this serves the practical function of exposition, but it also allows a really interesting and prickly collaboration between the player and the storyteller, allowing each a role in the creation of the "I" and "you" (the protagonist) of this game. The player provides the character's dialog, which informs the thoughts created by the storyteller, which further interact with the player's dialog, which also serves to co-author the responses of the other characters. It's a unique storytelling experience possible only in a game like this, and I find it rather thrilling to watch.

"Grandma's Photo" is another story that takes advantage of the form to do some interesting things with the player character's identity. I wonder about what would happen, though, if the player had a different role in the game -- what if he played the grandma? What if players were responsible for exposition and other tasks more commonly assigned to the storyteller? 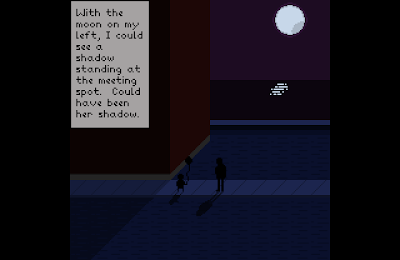 Rohrer has described Sleep is Death as a game ideal, at least in its beginnings, for the simulation of black box theatre-type experiences. This sounds about right to me. It seems that a good Sleep is Death story should emphasize interaction with several interesting characters (or just one!) in several small, interesting environments (or just one!) usually within a fairly narrow window of time. Much more Waiting for Godot than Les Miserables. Storytellers should allow the player agency more in dialog and character creation/definition than in terms of action -- and they should focus on responding in interesting, specific, human, humane ways to the actions of their players. They should aim for the weird, exciting, complicated, painful, beautiful little experiences most games simply won't be able to provide. And they should work to make something unlike movies and fiction, as well -- something that takes advantage of the relationship between player and game (something I've crudely described in terms of the first and second person).

I'm sure there are a lot of cool stories being told out there, and I look forward to telling my own. I would appreciate opportunities to play the game with others, and if you happen to find something cool made with the game, I'd love to see them. I also think you should probably buy a copy.

The game isn't perfect. Its interface can be a little opaque, and at times it seems to run slower than it needs to. but then, one guy made the whole thing, and he's only asking you to pay what you can afford -- and what seems fair. In any case, I plan to write about it in the future, and I just found out Rohrer actually lives out here in Las Cruces, NM too, so you can probably look forward to seeing me write some more breathless, enthusiastic stuff about it here on the blog.