Running my first game of Sleep is Death 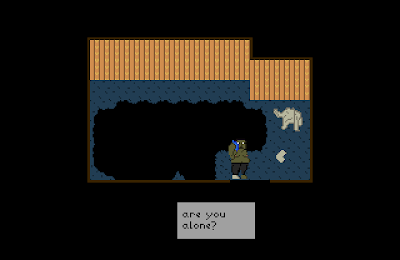 As Tracy wrote, we played our first game of Sleep is Death last night. I think it went really well, and I definitely plan to tell more stories with it. (I also hope to find someone who will tell me a story with it, but this is admittedly pretty demanding.) You can read the whole thing here. There were some hiccups where I misused the software slightly or misjudged how long something would take me to do (it's really interesting but also fairly stressful to create art on-the-fly for a game) and these resulted in a few continuity errors, some more embarrassing than others. These are a part of the experience, though -- SiD is a performance on the part of the controller and the player, and the mistakes become a part of the performance. Some of the mistakes are even sort of interesting if you take them as part of the narrative -- others merely serve as reminders that there are people behind all of the images on the screen. (Before we go any further, if you need a refresher on what SiD is, start here.)

Broadly speaking, the experience was surprisingly emotionally engaging. I had been working for the past week on creating the assets I would need to tell the story, putting in half an hour here and an hour there building characters, rooms, objects, and other art. The longer I worked on it the harder it was to believe it would ever come together in a story. And there's a real risk with this game that it won't -- if you go on building your story's world forever, if you don't finally play a game with someone and make it all live and breathe for a moment, I imagine you can get lost in the details. The limitations (the time limit, the turn-taking structure, the needs and agency of your player) are what will make the story happen. They give you structure and sense. The goal should probably be to do world-building as quickly as you possibly can while doing a decent job (with an eye toward creating assets that you can use in many, many stories) so that you can get into the meat of player interaction.

Of course a big part of the story's success was Tracy's performance as a player. Her gifts for character and dialog as a writer not only created Mr. Sagara, they made him an engaging person. I felt real sadness when he began disconnecting the phones, and my decision to make him cut his hand while disconnecting the phone in the closet built on that feeling. There's a sense of isolation in the game -- a weird loneliness that comes from knowing this whole little world is being built and sustained by just two people, for a very limited time -- that can be, if modulated by the story correctly, quite devastating. I saw glimpses of that. There is also, of course, a real warmth in the fact that you're interacting so intimately with another person. It's hard sometimes when writing to remember how important it is to be generous to your reader. That never becomes a problem in SiD, because your "reader" is right there, with a very real voice in the story's creation; the kindness fostered between controller and player is a very good feeling. 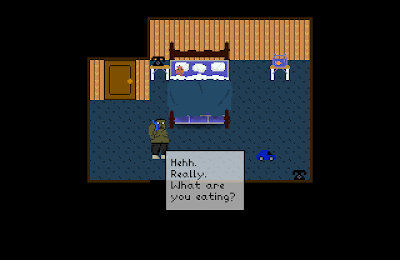 I suspect you could learn a lot about writing, reading, and art in general by playing SiD.

Below the fold, I'll make some more specific observations about how SiD works, and how those who play it can build a better experience.


There are some principles I worked from while planning the game and others I discovered in playing it that I think will generally lead to more satisfying SiD stories.