Rachel B. Glaser - Pee on Water 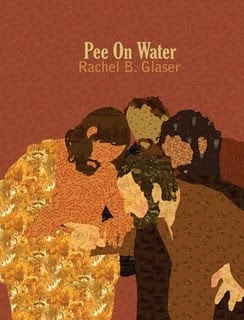 Right now I'm broke (you have to teach at NMSU for a full month before they get around to paying you, even if you've been doing it for years) but if you can afford it I strongly recommend Rachel B. Glaser's Pee on Water, out from Publishing Genius. I've read several of the stories in the book (you can too!) and her work is just always really interesting, weird, beautiful, funny, sad, etc. Can't recommend it highly enough.

Here's an excerpt from the titular story:


Though alien to the world’s ancient past, young blood runs similar circles.  All those bones are born from four grandparents.  Baby teeth and baby teeth all down the line.  Jackets didn’t used to zip up.  There wasn’t a single door.  The ground sits around us dumb and keeping secrets.

Earth is round and open, whole and beating in its early years.  Middle of the night, the stars in a bright smear against the blackboard.  Sit in the centuries-long lull.  A breath pulled so gradual the breath forgets.  Clouds idly shift their shapes.  Winds run back and forth.  Our planet in the slowest pink floyd intro.  Stubborn ice blocks will not be niced down by the fat sun.  Melted tears run, then freeze.  Tiny cells slide into tiny cells.  The wind learns to whistle. The sun starts setting in a colorful display.  Ice melts into oceans, lakes and ponds.  Plants have their first batch of leaves.  Guppies shiver in the lake.  Shiver, have babies, babies shiver.  Crawlers.  Diggers.  Stingers.  The plants get bit and chewed.  Leaves grow more intricate.  Beings start dragging with them, little lives.  Moments where they crawl on sand.  Moments where they look behind them.  They eat plants.  They eat stomachs.  Lick bones.  They pee on grass.  Pee on dirt.  Pee on snow.  Their skin is cut by teeth, by claws.  Water fills their lungs.  Blood falls out of place; cries itself in a blind pool.  Blood dries on leaves.  Blood browns on fur.  Creatures big as mountains stomp on top of mountains.  Then new ones.  New ones.  Feathers, spikes, hooves.  Clouds crawl smugly.  The air smells cool.  Atoms bump and lump without letters and numbers.  Monkeys play with sticks.  Monkeys eat ants.  Birds have sex.  Bears have sex.  The sun gets better at setting.  The monkeys walk upright, slouched, lips pursed, smiling, not smiling.  They get sexy about each other’s butts.  The monkeys fuck from behind.  They sleep in leaves, in mud, in trees.  They protect their babies and teach them.  The sun glares in their eyes, making spots.  Ants amble on, self-consciously changing direction.  Monkeys pee on leaves, on dirt.  Rain makes them flinch, makes them happy.  The monkeys make faces.  The monkeys get smart.  Two monkeys look at each other with knowing eyes.  The trees sway.  The birds chat.  The knowing eyes are locked in a gaze.  They look away.  They look back.  They have sophisticated children.  The monkeys grow and learn, get mad, throw stones.  New monkeys make faces and new sounds.  They need less and less protective hair.  They have babies.  Those new monkeys have babies.  They fight, throw punches, show teeth and bite.  The new monkeys think each other are sexy.  Raise their babies away from other monkeys.  New knowing eyes.  Laughing, teasing.  The new monkeys have vaginas more between their legs, less easy to snag on branches.  Males try sex with females from the front.  Boobs get bigger to remind males what butts felt like.