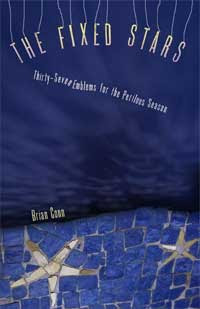 A Google search for "Brian Conn The Fixed Stars" doesn't take you far. There's an interview at 21C. There's a review by Benjamin Gottlieb. Another interview at Flatmancrooked. You would hardly know it's probably one of the best, most interesting, exciting novels published this year. FC2's endorsement means a lot to me, but I was still surprised by how strange and beautiful it was as reading. I've got a review coming in Puerto del Sol, and I don't want to cannibalize that too much, but here's the short version:

The Fixed Stars takes place after the end of the world. The causes are not clear, though you can feel them always pressing. Much of it takes place in a community at the brink, threatened by plague and scarcity. The people are alien, their culture is strange -- at times they seem admirable in their love, their selflessness, their generosity. At times they are opaque. Negotiating with them, imagining them, feels good. And there are many other stories -- romances, terrors, monsters, weird scientists, etc. The tone vacillates and slithers. It is rich, complex, at times difficult to read, at times compulsively readable. It is, like the magazine Conn co-edits, a brilliant example of the power that lies in taking science fiction seriously as a way of making art. You should buy it and read it.

I have to admit I've been puzzled by the apparent lack of buzz about this book. I've talked to people who loved it and I've read as much in scattered comment threads, etc. Brian Evenson has done his best to talk it up on his site and when I saw him at AWP, and in interviews, and presumably elsewhere. I don't know if it just hasn't found the right hands or what. Maybe it's selling like hotcakes and it just hasn't inspired a lot of coverage. I've got no idea. But one of the reasons I want Uncanny Valley to become something big is writers like Conn -- the ones that don't obviously fit a niche even in the weird little ecosystem of indie lit, but whose writing is so compelling that I believe they could be huge, if only they were given the chance. FC2 has given Conn the chance. So why hasn't the 'net wised up yet? What do I have to do to get you to read this book?
Posted by Mike Meginnis