About the Internet Cat Video Festival

I. About the Review of Cats

For a while in graduate school I wrote something called The Review of Cats. If you lived in Ames, Iowa and had a cat I knew about maybe I would come to your home and creep around, interviewing your animal. This was a great excuse to hit parties and also to slip out of awkward conversations. "Your thesis will cover which elements of the Midwest condition? Oh, sorry, that Siamese is just…look at how she's…staring." 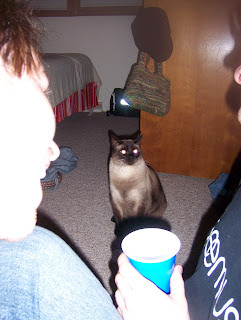 II. About playing her off

A couple weeks ago I drove to work and the people on one of the local stations were ha haing with Katie Hill, who had put together a festival of internet cat videos as part of the Walker Art Center's Open Field program, which hosts quirky and fun events like drawing clubs and storytelling programs and live music in a rolling field of grass greening out of a mostly developed neighborhood. Katie said this event, the Internet Cat Video Festival, started as a joke. By now it had caught enough press that, hearing the interview, I couldn't believe the festival was still in the future. It seemed I'd heard about it for months, which I had. My fiancée, Sarah, was interested, I knew. I, well—I used to review cats. And the people on the radio were so enthusiastic that one of them had brought her cat into the studio. When Katie Hill finished the interview, Keyboard Cat played her off.

III. About crying alone in a field at an Internet Cat Video Festival

I picked up Sarah after work and we marveled to find an open parking spot near the Walker. People were already fast-walking past, talking too loud, excited, carrying baskets and bags. Vendors had erected tents, tables. We walked a few blocks off for dinner and a few blocks back, spending enough time in the mid-August outdoors for my allergies to trigger. I was sneezing, swearing, a mess. We had to cross a blaze of tall weedy grass to get to the Walker's field itself and then I was nearly ruined. At a little bench at the back corner of a horizontal pile of people I collapsed while Sarah went to find a restroom. I sat alone, wet-faced and red-eyed, sniffling, looking like a man lost to emotion and weeping openly at a cat video festival.

IV. About the tight-roping drunks

People were everywhere. (The next day, the NYT estimated 10,000 were in attendance.) They rolled down the hill, up the hill, around the edges of the field. Robot-sounding speakers occasionally buzzed to existence and asked people not to climb on sculptures. Children screamed at each other nearby and deranged adults had brought animals. A miniature husky trotted by, looking impossible.

The bench we'd claimed was actually four benches, a wooden rectangle surrounding a sunken ventilation system maybe ten feet across. We could see the little screen far off at the bottom of the hill, but then as people packed in it became obscured, then as people stood it became hidden. We stood and the people around us stood. Then came what can only be described as a pack of drunken youths (and yes, I feel ancient writing that), who reached tentative feet out into the flimsy lattice of wooden beams in the center of this rectangle of benches, the weak net covering the ventilation system set into the earth, and they teetered out, wobbling, arms reaching, adjusting balance. A few crossed and then panicked, dropping bottles as they leapt out and into the crowd, but then more came, and some sat, and others came and were shocked to find the surface not actually a surface, to hear it creaking and then cracking.

V. About the cats

On screen, cats began meowing, sliding, dancing, head-bobbing. This was the first cat:

(You can view the festival's preferred version, which can't be embedded, here.)

I began writing here that I felt disappointment about this selection, but then I opened the video here at home, where I can actually see and hear it and . . . those are some cute cats. They are patty caking the hell out of each other. More cats blind-watch from right behind them, on the computer screen. The cats on the computer screen are not the cats patty caking. How many cats do these people have? Do they all patty cake?

Around this time in the night, someone asked via Twitter if the Don Piano cat had been featured. Well, he hadn't been yet, but he was up soon (in the #3 spot). You can see him, and the rest of the official playlist, here.

VI. About the people everywhere

They were everywhere, and they were into these cats. There were so many giddy laughing people that I felt compelled to document them with a photo despite the terrible lighting. They were sliding around and giggling. The older couple next to us whispered to each other throughout every video for a long stretch. The man kept saying things like, "Oh! He did it!" and "Oh my, how, what!" 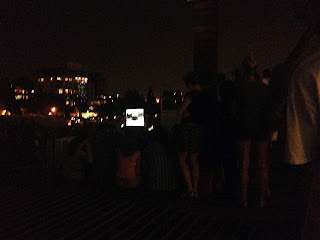 One of the conceits of this cat video festival was that the audience had helped build the playlist. People submitted their suggestions, which vastly outnumbered what the curators expected to receive. Of the thousands submitted, more than 70 cat videos were shown, with nine "people's choice" videos selected by popular vote closing the program.

I expected to be a jaded viewer but was surprised by the number of unfamiliar internet cats. The animated cats? All new to me. But then, I'm something of an internet cat purist. My internet cats are live, they are unrehearsed, they are spontaneously goofy, amazing.

VII. About the cat video that unforgivably went unshown

Posted by Tim Dicks No comments: