"The Things They Carried" and "Sweetheart of the Song Tra Bong" 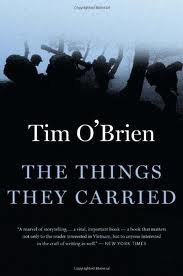 Yesterday my intro to CW class met for the second time. We talked about Tim O'Brien's "The Things They Carried" And "Sweetheart of the Song Tra Bong."

I think class went well! In some ways O'Brien was my attempt to give them a sense of traditional literary values, structures and priorities, but reading the stories closely in preparation for teaching revealed pretty quickly how non-traditional both stories really are. "The Things They Carried" is one of the most-read short stories in today's English classrooms, and it's a great example of a lot of the best advice commonly given in early workshops -- the importance of specificity, the pleasures of learning about an unfamiliar profession and its terminology, the power of objects, the importance of showing rather than telling (in this instance mostly through said objects), and so on -- but there are massive differences between it and what some call "the workshop story."

First and foremost, the structure is weird. I drew the classic diagram of narrative for them (exposition, rising action, climax, denouement) and asked them how this story looked in comparison. One student suggested a straight line, which was also my first thought. It just kind of goes until it stops, pursuing one line of logic all the way through, with the inherent drama of the situation flattened by the form, the subdued affect of the story, the cyclical relation of plot events, and the oppressive nature of the list. There are, however, some fluctuations of mood and intensity, which led one student to (very smartly) suggest the shape of an oscillating wave -- suggesting a story that ends much as it begins, but with movements up and down as it progresses. Another student suggested a circle, in that the events of the story feel cyclical. I suggested also a spiral, because while I agree that the story is cyclical I feel as if we are gradually closing in on something essential and central -- though at the end of the story it's hard to say just what that's been. Of course a list is also a kind of shape, and there is the rapid slope of the feeling of weight (we might envision this slope as falling or rising, as diminishing or addition).

Shapes also came up in the way the arcs of story often seems to cross each other. Lt. Cross decides the girl back home never loved him just as the reader may come to conclude the opposite.

We of course talked about the work the objects do in the story. I promised them that putting objects in their stories would improve them tremendously -- some of them wrote this down. Objects are great because they can be acted upon and through in revealing ways, but also because they tell you a lot about their owners by their presence in the story. Rat Kiley's M&Ms tell us more about him than anything the narrator could ever say, and more persuasively. We also talked about the detail of the pebble -- how perfect it is, how embarrassing, how it makes us feel so much so quickly, up to and including the feeling of the rock between our teeth, against the insides of our lips, against our tongues.

"Sweetheart of the Song Tra Bong" got a little less time but we got a lot done quickly. We quickly identified many genres at play in the story: it's a war story, a romance, an anti-romance, a comedy, a tragedy, a ghost story, horror, a dream or a nightmare, a shaggy dog story, a meta-story, and probably some other stuff as well. And yet it all comes together so nicely -- somewhat surprisingly, the students almost unanimously liked this one way better than the other. We talked about all the traditional explanations for why the story works in spite of all these seemingly-contradictory elements, including the meta-elements of the nested narrators and the use of these narrators to anticipate objections, manage expectations, etc., but in the end it came down to something a student said: the story reminded him of a Tarantino movie.

This comparison would probably strike most people as ludicrous or even offensive but it made perfect sense to me. The joy of Tarantino's best movies is his reckless mixing of genres and even discrete scenes, moments, and images that don't go together properly at all. We talked about how Inglorious Basterds doesn't at any point make any sense, and yet you can feel that there is a thoughtful, hard-working person behind the scenes, managing all these crazy parts so that they fit into a satisfying whole. And, ultimately, Tarantino gets away with his genre-mixing because he's a great writer and director: the endless conversations riffing on songs, foot rubs, Superman, and etc. don't need to be "managed" or somehow apologized for by a set of nested narrators. We love them because they're awesome. This led me to perhaps the best piece of advice I can give students, and the worst: "The way to be a great writer is to be a great writer." Which is, yes, tautological, but the point is that while instructors will do their best to give you strategies that lead more or less consistently to more or less successful stories, ultimately you have to take responsibility for writing awesome words, and this usually means some amount of forgetting what you've been told. If you write a really great ghost-horror-comedy-romance-war story, nobody will worry too much that it doesn't strictly "make sense." They'll be too busy enjoying themselves to care. Call it the Tarantino theory of writing.

Of course we talked about a lot of other things that were really interesting and exciting and useful, but this is the stuff I feel I can easiest explain here and now, on the blog. I welcome your thoughts, arguments, suggestions, and etc. on the stories and how best to teach them, and whatever. Tomorrow, we meet again, and I do my best to explain Sharon Olds.
Posted by Mike Meginnis