I don't keep careful tabs on what Disney's doing--I'm not sure they've made a watchable film since The Emperor's New Groove, excising anything Pixar's done--but feminists do, and I think it's important that they're watching out. The latest on the Disney front is an attack on Tangled, a take on the Rapunzel story, told from the male point of view.

The problem, for most who've examined it in light of gender issues, comes a little more from Disney's press on the film than from the film itself. Basically, Disney felt that The Princess and the Frog flopped because it had "Princess" in the title, making it unappealing to little boys. (Put aside the fact that a determined crowd of little girls can make any movie a hit--dragging their moms/dads/aunts/uncles/little brothers along with them.) A good example of the feminist rejection on that grounds can be found here, at Feministing. But take a look at the trailer and you'll see other obvious reasons feminist critics would be upset, especially when thinking of the messages it sends to young girls. For one, the depictions of Rapunzel are a little iffy--not that she's "too pretty" or "too perfect"; more that she's in an (ahem) uncanny valley between adult and little girl. Not a hot-tempered adolescent, as are many of the Disney princesses. She's baby fat plus high cheekbones, flat figure plus adult size. This is a trend to watch out for, as we usually see this type of character behave as both child and adult in the film also, moving seductively, for example, but speaking and acting childishly. Two, as a character, she's a blank so far. She gets all of a line in the the trailer--and that a line gives us zero indication of character, as it's completely tied to the situation and not to any personal feelings about the situation. The rest of the time, she's huffing, hmming, and lightly panicking. Not great. Three, to the extent that we can derive a story from what we see, it is this: A guy gets into trouble and meets a girl as he attempts to escape. She is more trouble (for him). He gets the girl out of trouble, becomes a hero. Where's she? What's her goal?

So yes, there are grounds for a feminist critique here. I don't see the ones above being addressed nearly as much, though, as I see the idea that Rapunzel's story was stolen from her. People are getting mad that Rapunzel doesn't get center stage, when it's her story--her name's right there. 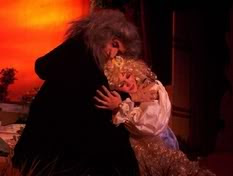 My problem with this claim is that, if you read the original Rapunzel, it isn't her story. We don't really see her much at all. It's one of the few "princess" fables centered on the prince--his efforts to see and rescue her. It's her story to the extent that she is the center of his universe, up in a tower, an object of affection and the source of an aim--to rescue her. She's kind of a Macguffin. So it's hard for me to see what story Disney would have ended up taking to the screen. Cinderella, Snow White, all the other princesses do have their own stories. Rapunzel is different. To give her the story you'd have to rehabilitate her role, and I'm sure many feminist retellings attempt just that. I have to imagine it'd be hard, though. Into the Woods, one of my favorite musicals, tries this but ultimately settles for failure; they could only rehabilitate the witch. Even in a fairy tale a witch has agency, makes choices, and thus can be recast as a stronger and more feminist agent. Rapunzel, a daughter, prisoner, temptation, and love object, does not have roles that can be easily rehabilitated. Her roles have to be created from very little given information. Disney is probably not too interested in taking those kinds of risks (and hasn't been for the past decade--hence all the sequels).

Which is why I'm way less interested, from a feminist perspective, in whether or not a female character takes the lead in a particular story as I am in how the story is driven and influenced by that female character. Yes, it's pretty gross for Disney to say they're worried that males won't like their movies because they're about girls. But the feminist problem there shouldn't be whether or not the stories are about girls; it should be about whether or not the stories are good ones. For girls, boys, anyone. A good story is a feminist story, because making good stories means making agents out of characters. 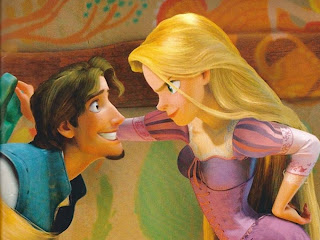 I'm doubtful of Tangled, but I'm curious to see if, by changing the perspective of the tale, the writers are better able to recreate the character of Rapunzel, to make her more active and driven. If they are able to make a male character with actual agency and not just a penchant for getting into trouble (and sadly, all signs point to no), there's every opportunity for them to create a female character to share the leading role and change the story for the better. She doesn't have to be center stage to be a stronger, more human figure. I'd even argue that she shouldn't be, and that the "center stage" vein of feminism leads to less equal/human women, not more. The Princesses are typically only a problem for children when they are cast (often in derivative works that lack a solid story--the sequels, the books, the games) as models of wish fulfillment and objects of general adoration. Putting these characters in the framework of a strong story, in which they must take part in the narrative (contending with villains and giving thanks to other good people for their help) and not just sit around, gives them aspects of self-determination a girl or boy can emulate and admire: initiative, ambition, perseverance, kindness, all in the face of real oppression, which will always happen, which will always require fighting back against. Not with frying pans and ass-kicking, but with words and behaviors. 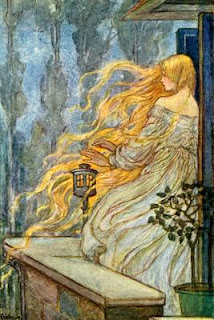 Robbing heroines of contenders, putting them center stage, leads straight to the cobbled-together half-humanity that Disney runs to in its fear. The kind of male character who's just a vehicle for laughs, slipping, sliding, climbing, falling; the kind of female character whose only response to her surroundings is to hit that guy with a frying pan--instead of talking together, instead of making things better together, instead of suffering together, instead of overcoming together. A young girl needs to know she matters, wherever she is, whoever she is, and that she matters in spite of the fact that she's not the center of everyone's world. A girl needs a model who will react to a world not created just for her, finding a way for herself that pleases her, and pushing back against those parts of that story that would try to keep her imprisoned.
Posted by Tracy Rae Bowling