Thursday two weeks ago my intro to CW class read selections from Sharon Olds' collection One Secret Thing. I am always afraid my students will not like the readings, not because it's especially important to me that they do -- I want them to read great work, great work is often divisive, students may benefit from hating something anyway -- but because an especially unanimous rejection of a reading generally grinds reading to a halt. I remember with a shudder the days where a class rejected Douglas Adams' Dirk Gently's Holistic Detective Agency and the discussions often ground to a halt. I was teaching Sharon Olds first, though, among all the poetry, because I thought her work was provocative in a way that would be useful to new students of creative writing.

This was actually the right question, the one I wanted them to ask, but they meant it in the wrong way. I was home schooled all the way up to college and I only read, past a certain age, what I wanted to read, so I forget sometimes how high school seems to educate students about reading, especially where poetry is concerned. Which is to say, they ate taught to read it like A) historians and B) English majors. Which is to say, they are taught to find absolutely every last thing other than pleasure in a text. Political arguments, religious ideas, metaphysics, philosophy, responses to culture, examples of historical moments or trends, hallmarks of literary genres, anything and everything but enjoyment. Which, you know, rather misses the point. Especially if you want to make actual readers and writers, who will necessarily need a little pleasure to get them through their days.

We spent a long time, for instance, discussing why you would write a poem featuring cannibalism and one's mother's menstruating vagina. What I tried to do was to talk about how electrifying it could be to read something like that -- something shameful, something that made uncomfortable connections, something that suggested some underlying feeling or impulse shared by mothering and cannibalism, by giving birth and devouring one's child. What they wanted, I think, what they had been trained to do, was to understand the poem as a dead thing, as something someone had written a long time ago -- something they had perfected, then abandoned, like a sculpture, or buried, like a diamond. A text handed down from on high for them to interpret. But while this is sometimes a satisfying way to read, it is perhaps never a satisfying way to read as a writer. A creative writing class should ideally demystify texts, should bring them back to life, reveal them as contingent, as the imperfect results of a series of decisions that might have been made differently. To understand a Sharon Olds poem, you may have to imagine yourself writing a Sharon Olds poem. You may in fact have to do this with any poem, any art, any thing. 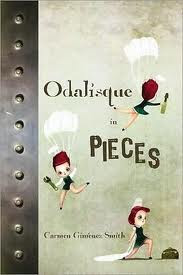 Next week Thursday (the last) I changed the order of our readings. We were going to read selections from Carmen Giménez Smith's collection Odalisque in Pieces much later in the semester, but it seemed to me that this would be a better way to talk about the things I wanted to talk about with my students; the language is (often) more accessible to college students than some of my other choices, and I had a feeling they would like it more than some of my other selections. And, hey, why not: it's a good book!


After some thinking I decided on an exercise. The idea was to show them that writing poetry is, from the writer's perspective, less about achieving a perfect vision and more about putting some words next to each other. I figure the perfection comes, such as it is, later, and should not be a student or even an experienced writer's primary concern. I'm much more interested in the joy of writing -- in feeling it, in teaching it.
So I had my students make three columns. At the top of each, they wrote the first two lines of Carmen's poem "Photo of a Girl on a Beach." Then, below those, they wrote 1) the next two lines, 2) two lines of their own creation, and 3) two more lines of their own creation. And so on, until they had copied Carmen's poem and written two variations of their own, which they would then title. As they wrote, I interrupted them periodically to ask them to read aloud what they had written, including Carmen's lines, and to discuss the logic by which they were writing. At the end, when most had completed their poems, I had two students go up and read their poems to the class. I then interviewed them about how they had selected specific words.

Some students tried to respond to the poem on the levels of sound and content, replicating the sounds of her lines and selecting tonally similar words, working with similar ideas. Other students seemed to write one poem that followed closely and another that struck out toward essentially opposite ground. Some used a similar palette to render an entirely different set of ideas and feelings. One student wrote about pirates, using related vocabulary in the way the original uses vocabularies of beaches, images, and memory. She was writing for the pleasure of using the words: "Yarr!" and "Scalliwag" and so on. I said I thought that was a good way to choose one's words.

Here is one student's response, posted with his permission, as well as Carmen's, with apologies for any errors I've introduced. You can click it to enlarge: 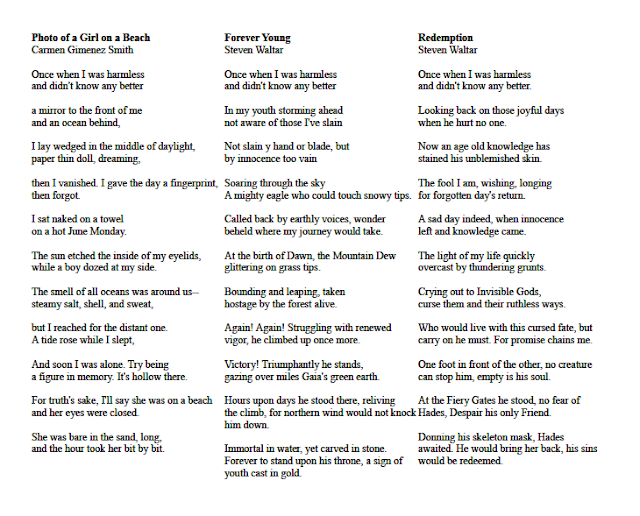 The point wasn't so much what or how they chose but that they did it: that they were, as writers, choosing. I wanted them to understand that poems are something that live first in their own writing, in the pleasure of deciding one word or another. That the ending is not contained in the beginning -- that every poem (every story, every art, every thing) is the result of this process of beginning with something and, after a little bit of work, having (finding, making) something else. Their poems weren't likely to be as good as hers given the conditions under which it was written, but I wanted them to see how hers was written, and how they might do the same: that the gap between her work and theirs is mainly in experience and polish. I got the feeling that they understood. We spent the whole class period rewriting this poem, and as best I could tell it was one of our best classes so far. They seemed excited. They seemed alive. I think the poetry was alive for them, too.

If you try this in your own class, you don't have to use Carmen's poem of course, but here are the reasons I chose it: 1) It's a good poem. This helps! 2) The first two lines are very suggestive. You don't know what's coming afterward, but certainly something is coming, and you can guess at its shape. 3) The themes and language are probably comfortable ones for young students, who will naturally identify at this stage in their lives with a sense of nostalgia/yearning/resentment for their squandered youths (poor old souls). They are probably also interested in issues of images, and who doesn't love nudity on the beach? 4) The units are very manageable -- the lines aren't too constrained, and their arrangement in pairs makes for an easy process. Write two lines, write two lines, write two lines, etc., you've done it. I would hate to imagine rewriting a poem without frequent white space this way, in a classroom.

How do you talk about these issues with students, or think about them yourselves?

Thanks again to Carmen and Steven.
Posted by Mike Meginnis