So many times in fiction, especially in workshop settings, we don't seem to talk about what our decisions mean for the reader--even though that's at least half of the workshop conceit (how to make a story better for readers + how to make a story better by writers). Reader-centered language is rare, and is generally sublimated into writer-centered talk. A writer saying that "This section would be better in scene" masks the reader response that got her there: "I want to feel more involved in this part; I want to watch it unfold." There's nothing especially wrong with that sublimation, but it does mean that honest conversations about reader rewards in fiction get buried. Mike has talked about this some, of course, and has structured his Intro to Creative Writing class around it.

The real problem that results is the conception that good fiction is its own reward. Never mind that no other form of entertainment works that way. 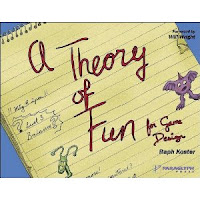 Our game developer friend Charlie linked me some time ago to a book on "fun" theory--how to, err, engineer fun, basically. I would like writers, especially writers of fiction, to talk about this notion more. The prevailing idea, I think, is that fiction isn't entertainment--it's art, and art is not meant to be constrained by the same commitments to providing (shameless) entertainment that TV and movies and video games do. But creating fun, imagining an experience for the end user (reader), shouldn't be considered a constraint. Making meaning in absence of fun is, in my opinion, the greater constraint--because making fun is just another way of creating interaction, of giving the reader somewhere to go other than where we lead, which in turn makes meaning. Meaning doesn't exist in a vacuum; it requires readers to build using our materials. In other words, if the reader is having fun, it's because they're interacting with what they read, learning, making decisions. They're playing. When this happens, fun creates art.

If we really need to, we can replace "fun" with "rewards."

This list of reward types in game design is perhaps a little glancing; I'm not sure. But it offers some good examples, some good points for comparison. Here's my list, recast for fiction:

There are others, but I'm having trouble finding analogues for them. If you play games, you know that the rewards below can be some of the most satisfying. Any ideas for how fiction does anything like this currently? Or, how it could?
For those still reluctant to give up the special status of writing as art, as a form fundamentally different in makeup from that of entertainment (and I am inviting discussion), what is it that distinguishes the function of art from the rewards above? And given the work, creativity, and imagination it must take to design a functional entertainment piece with so many of these rewards in mind, can we really say there's a separation between creating art and creating entertainment at all?

I guess what I'm arguing is--if there's no real structural difference in creating art versus creating entertainment, isn't it all just a game of reoutfitting the language? Can we talk about fun without cringing?
Posted by Tracy Rae Bowling