Tonight I went to a gym where there are TVs hung everywhere that play music videos that feel outdated. Between the music videos the TVs offer advice about what to eat and what not to eat and how often to work out. Tonight they offered this advice:

Don't stare at other members while they workout. It's rude and distracting.

This was laid over an image of a woman staring out of the screen. She looked angry and a little disturbed. Damn, I thought. Has there been a problem with this lately? What the hell is going on in this gym? Knowing that people have to be directly told not to be creepy perverts--that this part of the social contract has been forgotten--is a little worrisome.
. . .
Anyway, that was my unexpected lead-in to this post. The original lead-in goes like this:
For a week or so there was this poster advocating healthy eating in the hall outside my office. It was all big pictures and tiny print and didn't really give you anything you didn't already know, you know? You know? It did, however, give some creepy people eating food. They were so creepy I took pictures: 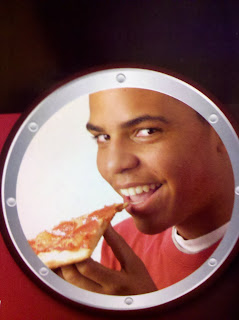 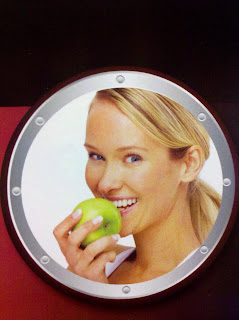 I mean, damn. These people are beyond excited to be eating. There's something sinister about these images--it's like the man and woman are eating pizzas and apples made out of humans and they know you suspect! And they want you to know that you should suspect! And they want you to know that it doesn't matter if you suspect because you will be eaten next!
Anyway.
I was reading Bookslut yesterday and found Lou Beach's 420-character stories and I haven't read all of them or even a lot but what I have read I've liked.
I've been meaning to post one of my own here but everything I've knocked out for Moonshot lately has been long. But what the hell. Here's a little ditty called "Clean:"

I started meeting this woman who wore skirts she'd sewn herself and who wanted to ferment her own wine and who didn't like me wearing deodorant. When we broke up I didn't want to stop thinking about her but I wanted to throw a glass of her homebrew wine all over her living room. I thought the best thing to keep her memory bright while still kind of laughing at it would be to home brew my own deodorant. I was excited about the idea for a day and then one of the clerks at the co-op talked me into soap instead.

"Our butcher will give you fat for tallow," she said.

When I got the bag of pork fat home I stuck it in the fridge and then thought maybe I wasn't supposed to refrigerate it. It felt about how you'd expect, so that I wanted to juggle it or throw it across the living room and see if I could catch it on the other side without smashing through the window.

I got on the internet and then imagined myself running into Bliss. I smell you're using soap again, she'd say. Soap I made, I'd say. And then we'd be back up here together.

I went through recipes and procedures. I mean I really combed the internet. I thought I'd make the best soap I could and I took the wildest recipe I could find and then made it better, dumped cinnamon and a cap of bleach into a bowl while the fat rendered. When it was done I got everything together. You were supposed to use molds but all I had was an ice cube tray and I didn't want to chase little wedges of soap around the shower so I left the soap in the bowl.

Then I went to this little bar down the street. It was a little room with a few tables that looked dragged in from thrift stores. The bartender kept on me about the different levels of hops in the beers and this had all been charming before but without Bliss it was too much. I got back to my place and the soap was done and so good that it had cleaned its way through the bowl and in a long gouge over my kitchen counter and was bubbling through the tile floor. I stooped to get the blob and it was heavy and then it cleaned right through my hands. All my fingers were mostly just gone and parts of the palms too. I kicked at the soap and it cleaned right through the tip of my shoe and then cleaned through the wall and into the living room.

I went for my cell but couldn't even unlock the screen. The soap boiled away beneath my coffee table and then was gone and there was a heavy thonk as it hit the floor of the apartment below me. Well, I thought, they'll call the police at least, but then nobody came and nobody yelled. I looked down through the hole and the soap boiled away and then was gone into the basement. I knew I should get outside and yell for someone but how was I supposed to handle the knob? And anyway I couldn't take my face out of that hole in my floor. Downstairs they had everything, two leather couches and a clean table with a photo album on top and I could only imagine the happiness inside. 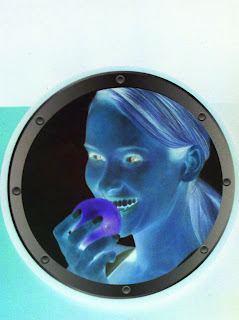