Something I've been thinking about a lot recently, partly in relationship to Tracy's last post, is reader participation. What is it? What forms does it take? How can we foster it?

When I think of participation in a story or poem or whozit I think of "playing along." I think of my legs predicting the arrows in DDR through a constantly evolving matrix of possibilities implied by the mood of the song, by where my feet have been before, by where they could be soon. There are only four arrows, which can be stepped on in six combinations. (Down-right, down-up, down-left, right-up, right-left, up-left). Most people don't understand music very well, but they understand it well enough to dance. Even people who can't dance can play along with DDR because the options are so limited. Your feet have a high chance of already being in the right place as long as you're standing, as long as you're in the game.

There are more canonical notes than there are steps in DDR, but not really all that many. A musical idiot in this country can tell you whether or not a song has resolved, and someone only two levels up from the idiot (a moron) can instinctively guess how a song would resolve, if it did. This is because a) our brains are constantly unconsciously performing complex high-level math, b) a lifetime of constant exposure to music has made us startlingly well-experienced with its basic building blocks, and c) while there are infinite potential permutations of any given musical idea, there are quite limited materials with which to build those permutations, and even fewer that (musically speaking, mathematically speaking, culturally speaking) make any sense in situation X. 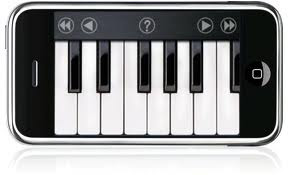 For example: Britny Spears' "Toxic" is one of the most fiendish pieces of music ever composed. (Ukelele cover YouTubed below 'cuz I said.) The string part, played twice at the beginning, creates a desire. You know somewhere inside you there's a counterpart waiting deeper in the song. You know it's got to be there. You could practically hum it yourself before you hear it. But it doesn't come, and it doesn't come, and it doesn't come -- they play the first snatch of strings again, again. You've got to wait more than a minute and a half to hear the other bit. You hear it once. This, however, only creates a desire for the original piece. You hear that repeated to the end of the song. If you want to hear the middle part again -- the part implied by the hook -- you've got to find the song again and listen again. This will, however, only create more desire for the song. It's monstrous.
Pop music uses our knowledge of music against us. It creates a thought virus with only one purpose: the manufacture of desire for itself -- that is, the manufacture of desire for desire to desire for desire to desire for--


Which is why we can't always listen to pop, especially the evil stuff. (The good stuff, the stuff made with love, occasionally bothers to satisfy the need it creates.) Minimalism is sometimes the next best thing. You can understand "In C" even if you couldn't predict or perform it, exactly; when I saw it performed, they projected the sheet music above the orchestra, so those who knew how to read music could better understand the performance. I couldn't at the time read music (and now can only read a little) so it didn't do me much good, but I immediately grasped the concept: the song has pieces, there are a limited number, the musicians will work through them according to their instincts and experience and knowledge of each other, and the feeling of the room, and so on. You can participate in "In C" if you can recognize a tune, which again, most of us can do. Its slow, spiraling, beautiful, redundant, stuttering structure allows you to enter at almost any time and participate in its performance, if not by influencing the song itself then by imagining parallel worlds and thereby understanding the choices the musicians make instead.

And this is key: because there are limited options, and even more limited coherent options, we can game out possibilities (unknowingly, usually) and appreciate what's chosen instead as better, or equal, or object to it as worse. This is the chief means by which art can attract its audience's participation, which in turn makes it the principle means of generating, well, meaning.

This puts writers in a difficult position. There are twenty-six letters in the English alphabet. They have capital and lowercase versions. ABCDEFGHIJKLMNOPQRSTUVWXYZabcdefghijklmnopqrstuvwxyz. There is punctuation and there are symbols. :;<>,.?/\|][{}()_-*&^%$#@! There are many sounds a human mouth can make and mind can read, though thankfully within a given language the number is usually not very large. These sounds can be built with the letters. They can be combined, in turn, to make words. In any given language there is generally an unbelievable number of words. These words often contain multiple meanings. They can be combined infinitely, they can be punctuated infinitely, creating not only infinite permutations but infinite structures and lenses through which to understand them -- that is, while music is generally understood through a pre-existing genre, and especially popular music, and this genre is frequently very specific with very particular rules, books must frequently create their own genre, or recreate it, within many overlapping contexts, most of which a given reader likely will not know.
There are too many elements -- there are too many things to think about. The reader cannot possibly predict anything in a work that aims to take advantage of every element of language. The reader cannot make sense of such a text. The reader is closed out. The reader does not perceive decisions being made. The reader therefore does not, cannot, assign meaning to the text, is likely to abandon it all together. The reader does not feel wanted. The reader does not feel loved.
(Anyway this is how I feel as a reader. I know people that will put up with such treatment -- people that love it, in fact. I can't really understand them.)
How do we deal with these problems? We can look to many sources for answers. The underlying principle I have found so far in my thinking about this is that it doesn't really matter what your answers are so much as that you pursue them, because ultimately we are only looking for a way to narrow the options, to make the work more manageable (though not less complex in its potential) for everyone concerned. Why don't we look first to Janelle Monae? I am thinking particularly of her song "Tightrope."
It's a really good song! Take a moment to enjoy it. Pop songs generally deal with language -- some better than others. Monae and Big Boi are better at this than most. Note the limited vocabulary. Note the repetition. Note the use of rhyme. Note the brevity of each lyrical unit. Note the masterful way in which Big Boi creates desire for a certain rhythm, a certain cadence, and then manipulates that desire, plays with it. I have for maybe a year now sort of instinctively called this "pulling the taffy," which I think perplexes my students.
What we see immediately is not wholly uncommon knowledge: that limiting possibilities creates them. That the less balls we've got in the air, the more skillfully we can juggle. That selecting a palette is the best way to avoid an undifferentiated brown slur. We can learn from this in prose and poems as well, and most of the best already have: they know to limit themselves, whether arbitrarily or logically, to create something beautiful, sharp, jazzy, meaningful, and, most importantly, inviting and gratifying (even at its most challenging) to readers.
In the next few weeks (hell, maybe for the life of this blog: the topic is rich) I'll explore these ideas and work them out better through close examination of various books, stories, poems, YouTubes, paintings, etc.
Posted by Mike Meginnis