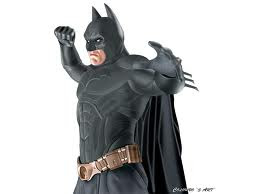 
Batman is awesome, but only because he's so smart. He figures out exactly what he'll need in the field and stuffs in all into his Batsuit and utility belt. This is exactly what inspired the U.S. Air Force's "BATMAN" program, which aims to develop new equipment so that soldiers are as capable as Batman himself.

BATMAN stands for Battlefield Air Targeting Man-Aided kNowledge. Sure, it cheats, but who's really going to criticize the Air Force when it's running a program called BATMAN? BATMAN program engineer Reggie Daniels says: "[Batman's] devices allow him to have an advantage. That is what we're trying to do."

Really excited to see where the military looks for its next big idea. A Hawkman unit? Darkseid blac-ops? Green Lantern super-jets? The exact freakin' premise of Captain America?