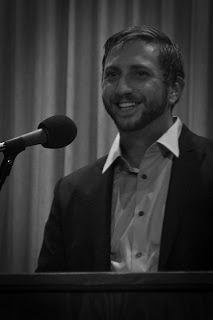 A few months ago our friend Robbie started posting sentences about fathers to Twitter. They were from a book about robots -- he had taken the word "robots" and replaced it with "fathers." Some of the sentences were very funny. Some of them were very sad. I told him to make the sentences into a poem or a story and we would publish the results. He worked on it off and on for a while. Yesterday he sent me a draft. It's very good. I felt we could announce that Robbie would be in our first issue.

Robbie is more widely known under the super-classy moniker "Robert Alan Wendeborn," which is, as far as I know, his real name. He blogs about food with our friend Carrie at Master of Fine Eats. He's published poetry with PANK, with PANK again, in Strange Machine, and probably in other places I  forgot about. His poetry is often sweet, sad, hilarious, painful, lovely. I'm proud to call him a friend. Hopefully he'll be writing posts for us soon -- he promised me one last night about mustaches.

To your left is a super-classy photo of Robbie reading. As NMSU student and photographer Josh Bowen says, "Black and white makes things serious."
Posted by Mike Meginnis