Mike insists this would be funny: Imagine the Kool-Aid Man as a sort of supervillain--a strung-out, hypermanic party crasher. (It should be pretty easy.) Now imagine him fighting the Incredible Hulk. Who would win?

I'm more in the business of cataloguing than arguing, as I don't really want to go down as having a position on this matter. Let's name some traits!

Strength #1: The Kool-Aid Man can burst through any barrier at any time.

This one is pretty self-evident. The Kool-Aid Man is traditionally seen bursting through the borders of a domicile: ceilings, fences, basement walls. We can only assume he has the ability to burst through any structure he pleases, as long as those who want Kool-Aid are stationed inside. This is important; unlike the Trix Rabbit, he is not beholden to societal norms of who is permitted and not permitted to drink Kool-Aid. Though it's children who call him, everyone from disco-era socialites to the friendly neighborhood copper must admit that "Your friend is cool." Oh, he's not just cool. He's Kool-Aid.

Strength #2: The Kool-Aid Man's relationship to his life fluids is ambiguous at best. Is the Kool-Aid Man filled with Kool-Aid? Why not simply tip himself over and pour himself out? It's true that the smaller jug he carries at his side is the primary source of refreshment. But does that mean the substance inside him that appears to be Kool-Aid cannot be spilled? Does its resistance to sloshing during all the Kool-Aid Man's break-ins indicate that the fluid inside is more viscous than regular Kool-Aid, which can be easily poured? Does more viscous mean more vital? A potential rival would have to spend several moments, or waste several tries, discovering whether or not these fluids are mortal. And what if the Kool-Aid Man can survive as a jug alone? What then?


Weakness #1: The Kool-Aid Man is beholden to the soft, sweet call of thirsty children.

Where thirst and children come together, the Kool-Aid Man is there. For this reason, it's difficult for me to imagine him as an independent entity rather than a sort of Pokemon wielded for battle. But even assuming he can, in fact, act alone, how long could he ignore the siren call of "I'm firsty?" A willingness to exploit this weakness perhaps reveals more about the opponent than about the Kool-Aid Man himself.

Weakness #2: The Kool-Aid Man is older than we think.

I'm guilty of appropriating the Kool-Aid Man as the summer refreshment symbol of my golden childhood, but the fact is he was there for older brothers, cousins, perhaps even young aunts and uncles, all the way back to 1975. Who can say whether the Kool-Aid Man ages in the same way we do, or whether he, like us, has a time limit. But a 35-year television career will take it out of anyone. What's more, Kool-Aid's alter ego, Pitcher Man, has been around since 1954--a long life for a logo. No assumptions--but I will say I'm skeptical of the "youngening" he's gone through from then to now, the "friendlification," a certain recklessness (look at that spray!) that has apparently evolved from his more sober and stable state. 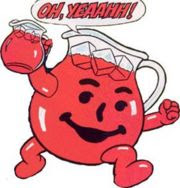 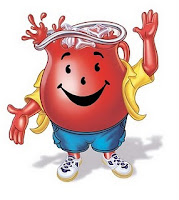 Strength #3: The Kool-Aid Man can run. Oh, you better believe he can run.

Of course, as Kool-Aid Man also took a starring role in comics and video games, the answer to these questions may be right in front of us. Stats have been compiled (apparently his primary weakness is dehydration). Or if you're more inclined to gather your answers from history, as I am, try this review of Kool-Aid Man commercials through the decades and prepare to be creeped the hell out.
Posted by Tracy Rae Bowling