Previously Tracy asked if the Kool-Aid Man could defeat the Hulk in battle. She came to no conclusions herself, leaving that as an exercise for the reader -- though, as was later revealed in the comments, Kool-Aid Man is canonically as strong as the Hulk (perhaps exactly as strong as the Hulk) which, given that the Hulk is mainly known for his incredible strength, seems somewhat suggestive. Still, we should explore the question as thoroughly and scientifically as possible. 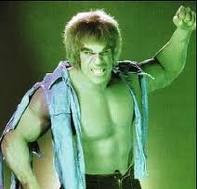 The Hulk is one of those superheroes who can do anything his writers need him to do: because his strength is a function of his anger, you just have to really piss him off if you need him to lift up a building, punch the planet Earth in half, or etc. This is convenient, given that should the Hulk need to do something of that nature, odds are he's pretty mad about it anyway. You don't get a better engine for narrative than a character whose potential for violent catharsis is directly proportionate to the suffering inflicted on him: writers can't resist pushing his buttons, and artists have a lot of fun drawing the predictably explosive results. For instance, after a long period of rationality wherein all his various personae had been synthesized, The Hulk's girlfriend got killed (apparently as a result of the writer's wife leaving him -- don't think about that for too long), leading to his inevitable return to insanity/HULK SMASH. The worse things get for Hulk, the better he gets at punching them.

Weakness #1: But they really like to piss Hulk off. 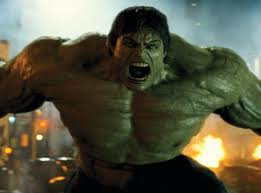 Hulk has been rewritten in the course of his magazine as a victim of child abuse who, as a result, suffers from severe dissociative personality disorder. He has been hated and pursued at one time or another by most of the country. More recently, Hulk was launched into space by people he had previously thought his friends. He was meant to live in peace on a planet without sentient life. His ship was knocked off course, however, and instead he ended up on a planet where he had to fight just to survive. And fight he did! So well, in fact, that he eventually took over as emperor of the planet. Things seemed to be going just fine until his ship exploded, killing millions of his subjects, as well as his pregnant queen. His rage led him to invade Earth and lay waste to Manhattan, before it turned out his wife and had died because of one of his current friends. Then Hulk went into a coma. There seems to be a curve on this stuff: Hulk's life gets worse and worse, so he punches harder and harder, which makes things worse, until finally he has to take a rage nap for a few years. If the Kool-Aid Man could keep cool, he might be able to survive that wild trajectory. And if there's one thing the Kool-Aid Man can do, it's keep cool. (And well-hydrated.)

Strength #2: As a popular superhero, Hulk has (in the parlance of Mario) essentially infinite mans. 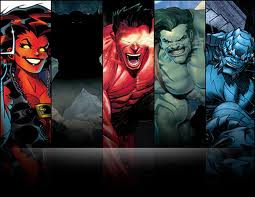 It's possible that the Kool-Aid Man could kill the Hulk given a sufficiently dramatic storyline. However, it's not at all clear that the Hulk would stay dead. When Superman died, about fifteen more Supermen showed up, as if spawned in a bizarre act of asexual reproduction -- then, on top of that, Superman himself came back. (Later it turned out he hadn't really come back, or something.) When Batman's spine was broken, that led to the creation of a tougher, more kill-happy Batman. When, more recently, Batman was killed, it only resulted in him traveling through time, wearing a series of improvised bat costumes that will presumably become collectible action figures and pewter statues in coming years. Likewise, Hulk's recent misfortunes have resulted primarily in a proliferation of Hulks. If you strike him down, he will become stronger than you can possibly imagine -- and crap out some fifty moderately marketable knockoffs in the process.

Weakness #2: Hulk is prone to allegorical and psychological readings.

The Hulk was originally patterned after both Dr. Jekkyl and Mr. Hyde and Frankenstein's monster, so he can instantly become a metaphor for essentially any aspect of human psychology or philosophy. Peter David's now-canonical interpretation of the character as a victim of child abuse with multiple personalities has the benefit of being mind-numbingly obvious and adding genuinely little to the character. But it does tend to take time away from the all-important SMASH with things like introspection and abuse of the DSM IV.


Ang Lee's film adaptation of the Hulk is the most notorious example of this tendency, with most of the film's running time being devoted to the fact that Bruce Banner's daddy was mean to him. But, more generally speaking, the temptation to read Hulk as (for instance) a representation of Freud's ideas about the psyche is too powerful a siren call for most writers to resist. You want to hate them for it, but you can't -- Hulk is such a ridiculous-but-charming character that he screams for artsy revisionism; given half a chance, I'd do more or less the same thing.

Strength #3: The Hulk can jump like you wouldn't believe.

In video games and in film, Hulk actually seems to spend most of his time bouncing:


And yes, I'm really going to go this whole post without referencing his invulnerable purple pants even once. What's left to say at this point? Stan Lee didn't want to show you Hulk's dong. Do you blame him?
Posted by Mike Meginnis