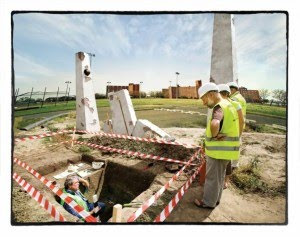 Amber Sparks is Writer in Residence over at Necessary Fiction this month, and rather than just post some more of her great stuff (which would have been fine by me), she's doing a collaborative project called The Ancient City.


The excavation of the Ancient City is not a fixed event: not in time nor in place. It symbolic, ongoing, the constant unearthing of the stone walls and battlements of a very old place in the world or maybe in the world’s consciousness only; it is the always-discovery of a thing that was once a city and is now the collective shuttered memory of a forgotten people. Indeed, we will be the City’s forgotten people someday, only our bravest buildings and basest metals left to mark the spot like stains.

So far, there are unearthings from Robert Kloss and Anne Valente, but certain unsubstantiated rumors have it that Uncanny Valley contributors Tim Dicks, Roxane Gay, and yours truly will be taking part before the month is up. At the end of September, the whole thing will be moved to its own website. Go check it out.
Posted by Gabriel Blackwell