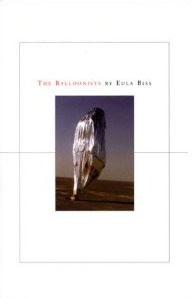 Today my class was supposed to read Blake Butler's story "The Copy Family" and the prelude to Eula Biss' book The Balloonists. "The Copy Family" did not work out -- I screwed up on the tech side of things and my students are apparently not so eager to please me that they'll google a story if I fail to post it properly -- but it turns out Eula Biss's slight prelude was more than enough to keep us busy for the hour.

I had originally chosen to include the excerpt because I wanted to spend at least one day on works that blurred genre. I'm not sure how Biss would describe her own work, apart from the fact that her website says she "teaches and writes" nonfiction. When I first read her work I somehow hadn't heard the term "lyric essay," which might be one reasonable point of consensus, but poets seem to have adopted her as their own, and some people describe her as a poet. One of my students today described her as something like "a poet who writes prose." Other students compared the excerpt to a play, or a screenplay. I suggested a documentary that used the conventions of interviews and stock footage.

We didn't worry about classification so much as the formal operation of the text. We spent pretty much an entire hour slowly reading over one segment and discussing how each piece related to the last piece, and what it made us think of.


Mother: "I couldn't stand his friends from medical school. They were all pompous and awkward. They knew how to memorize but they didn't know how to be human. Rochester was cold and ugly. Everything there was the same color. I was incredibly lonely."

She had her first child that year.

Malcom McPherson recently collected a book of transcripts from cockpit voice recorders called The Black Box: All-New Cockpit Voice Recorder Accounts of In-Flight Accidents. It is the updated version of a 1984 "classic." On some of these flights, there were no survivors. only voices were salvaged.

Mother: "If your father got his residency in Iowa I would have gone to graduate school there. I was already accepted. He was sent to North carolina instead."

The transcripts in malcom McPherson's book were edited by the National Transportation Safety board before he published them. Any emotional material was deleted. The curses and apologies that were yelles out just before the crash were deleted. Only material useful to the public in determining the cause of the crash was retained.

Mother: "I'm amazed that more people don't commit suicide. They just keep on living. It's so hard and they just keep doing it."

Useful to the public?

The combination of different formal elements and subjects creates a larger narrative and argument without ever actively arguing: the reader finds an extremely satisfying experience in imagining what happens in the gaps between paragraphs, why element X is in this position and not that one. This encourages active reading. I made them go over every single thing that came to mind about this process in order to make them more conscious of it, and at the end of class, I argued that everyone's work operates more or less like this -- that the gaps are usually less explicit, but always there, and often very productive. I suggested they try making the gaps in their own work a little bigger -- not puzzling, but sometimes, in some ways, a puzzle.

I think it went pretty well! I would suggest this book, or a similar one, to anybody teaching CW, in any genre.
Posted by Mike Meginnis