I'm ambivalent about hypertext fiction (I suppose about hypertext poetry as well, but this is is Short Story Month, so, for now, I'll keep that to myself). It seems like unnecessarily ceding reins best gripped firmly in the author's hand -- the result not so much something running away from you, reader or writer, as a vehicle turned from its purpose and rendered inert, a pumpkin into a pumpkin. Think about a coach unharnessed, an automobile without an engine, a bicycle without wheels. When there is no sequence, there is no narrative, there is at best a calculated inertia -- the amount of weight the concept carries directly proportionate to how much distance the reader will travel in any one direction without the assurance of an end. I mean that there must still be a plan, a progression, no matter how interpretably loose it becomes (and that plan must begin to reveal itself pretty damn early in the piece for me to spend much time with it). Often, I find myself a little nonplussed and a lot overwhelmed by trees of links embedded in something that is itself already a tree of links, a directory of meaning, feeling, and story. The properly written story is already a hypertext, a spark for all kinds of fires; increasing this exponentially often seems rather to fizzle than fire, to burn out than to burn bright.
One of my favorite hypertexts is not, strictly speaking, hypertext at all. William Gass's outrageous Willie Masters' [sic] Lonesome Wife was originally published as a supplement to a 1968 issue of Tri-Quarterly and then republished by Dalkey Archive some twenty years later (like all of their titles, it is still in print, and, like all of their titles, it is worth your time and money); I suppose it's somewhat more akin to Infinite Jest or Hopsctoch than much of the holdings of the ELO, but it is still at the outer limits of what one brain can take in in one sitting, as near the pole of narrative as I'm likely to travel. Through clever typesetting and careful conceit, Gass does what the internet makes fairly easy and thoroughly commonplace. Yet the experience of it is still radical and hard-to-digest: How could one truly take in every last strand on the page at once or even in top-to-bottom sequence (that is, following Gass's pages in the manner in which we have grown accustomed to reading, beginning to end, without significant detour or return (the manner in which you are reading this post now))? One couldn't, not possibly. Instead, one reads each individually, but Gass has prepared all sorts of traps -- strands end in one spot and carry on pages later, while intermediate strands take over the page and spawn yet more strands of the narrative that also demand the reader's attention and interest. Footnotes are sequences of asterisks, typographically invisible after a certain number, often footnotes of other footnotes. Yes it's been done since, but this extraordinarily slim book is still an education. I hesitate to call it a story, it is so complex, but there it is. Slim, yes. Slight: not in the least. 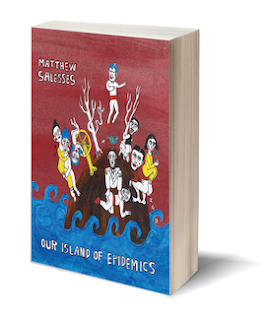 And I recognize the benefits of true hypertext, the reason I started this post (you see, the internet or its architecture has impressed itself upon me thusly, that I am less inclined to come to the point as quickly as I would in print, relying on this post's nodal nature to assure your attention to its end). Compounded today is Matthew Salesses's Our Island of Epidemics, released last year as a book by PANK's Little Books, but originally appearing across the internet as a series of stories linked to each other not sequentially but some other wise. Sometimes the links are clear, sometimes not, but having them together not in one, set sequence but in their original reticulate structure does something very good for them. One can explore the island as it seems meant to be explored -- we've all seen "Lost," no one goes straight for the interior, even if only Sayid strikes out along the beaches. It takes some time to see it all, and, as my own travels have shown, exploring islands -- or anyplace, really -- involves crossing your tracks more often than you would expect in setting out. They're circular, after all, at least ovoid. And so, partly because some pieces were published in tandem, but also, I think, intentionally, we come upon things more than once not only because they are linked to more than once, but also because we can't travel to the place we're headed unless through one we've already traversed. This creates oases, colonies, natural sinks for the transmission of disease, mass hysteria, and magic.The epidemics of the island spread: Salesses acknowledges that these are stories told by groups to themselves, inclusive, and finally, including the reader. The dissemination of narrative as epidemiology.
All this to say that I enjoyed Our Island of Epidemics, I think most in this latest incarnation. There is an awful lot of "we" in the fictive landscape today, a symptom of some other cultural disease, I'm sure, but occasionally, as here, it is used to good effect not only in the prose of the thing but also in its conceit. You should take some time to read it.
Posted by Gabriel Blackwell