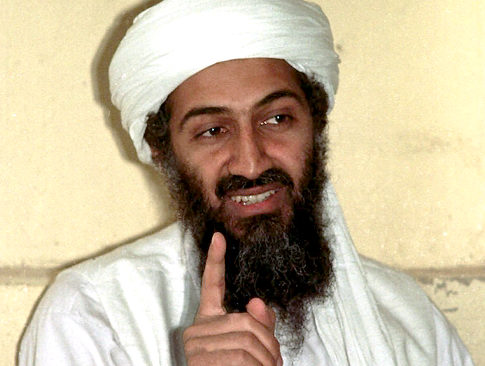 You have probably seen this quote, from Milan Kundera, in The Unbearable Lightness of Being: "Kitsch causes two tears to flow in quick succession. The first tear says: How nice to see children running on the grass! The second tear says: How nice to be moved, together with all mankind, by children running on the grass! It is the second tear that makes kitsch kitsch."
I don't have a lot to say about the death of Osama bin Laden, or rather, to say anything meaningful on the subject requires such time, patience, and care for context that I am not willing to make the investment. I don't mind if you're happy he's dead. It's a reasonable response. But I can't really be happy about it: the cost has been too high, several times over, and it seems extremely unlikely that anything will change. When news came out that the president would be making a late speech on a matter of national security, and then when it turned out that the subject would be bin Laden, my main feeling was relief that he wasn't declaring another war, further escalation in Libya, the imminent arrival of some massive planet-destroying asteroid, or etc. I then felt a vague hope that this would help my preferred political party in the next election. I then wondered what they would do with the body.
The Twitter-cycle in response to the news was rather different. There were a lot of variations on two jokes I'm already done with: "Does this mean we can bring shampoo on the plane?" and "I bet Trump won't accept it until he sees the long-form death certificate." Watching these two jokes and their hundred variations spontaneously form in the minds of several thousand people was sort of insane; watching them all retweet each other was weirder still. Then people started to celebrate and talk about how much of a badass Obama was. Then -- and this was the part that really surprised me -- a lot of people got pissed at anyone who was messing up the party by voicing any sort of ambivalence or discomfort.
Understand that within seconds of the news, many were writing joyfully about the possibilities of what could be done with the body. (Wrap it in pig guts, for instance, and burn it on Ground Zero.) People were drinking. People were getting sexually excited, and they were talking about their sexual excitement. People were talking about how the waving of American flags and singing of patriotic songs on the White House lawn were literally and actually the most beautiful things they could imagine. This was, for me, uncomfortable. I've written here about my deficiencies as an identifying person -- basically, identification at the group level has proved almost impossible for me, historically -- and I know that this was at the root of my discomfort, but the gleeful bloodthirstiness of it all was a bit much for me. I absolutely understand why people were excited, and while I can't share that feeling, I can to some extent endorse it.
But the sudden fury that greeted any American who didn't respond with spontaneous, identical joy to the joy experienced by other Americans was kind of shocking and frightening. And I felt, at the root of it all -- at the root of the crowds that gathered, without planning or discussion, outside the White House and etc., to sing and wave little American flags and so on -- a demand for kitsch, for kitsch now and kitsch forever. What people wanted -- what many of my friends wanted -- was to know that everyone around them was feeling the same things that they were feeling. The idea of anyone feeling something different from what they were feeling was monstrous to them. It was disquieting. They wanted it to stop so that they could continue to feel exactly the same as everyone else, or, more precisely, to imagine they were feeling the same way everyone else did.
And this is in so many ways what it all comes down to, isn't it? The need to believe we are all deep-down the same. Supposedly the great novels, movies, etc., all teach us as much. David Foster Wallace gave the best version of this idea when he argued that literature is supposed to make us feel less alone. So, it seems, is military action. By destroying Osama, we purified all difference and potential feelings of alienation, and anyone who attempted to reintroduce these unwanted experiences into our collective consciousness was cursed, shouted down, or, at best, ignored. The demand for kitsch overpowered all other needs. This is why I am so skeptical of anything that tells me I am deep-down the same as everyone else. It might be true. But the comfort we derive from such feelings seems false. And the quick, easy rage with which people defend that sameness is more deeply disquieting than any feeling of being alone.
Posted by Mike Meginnis