The Shape of "Short" Fiction

In my last post, "The Genres of Length," I wrote about, well, length. It seems fairly elementary when considering the short story; after all, the qualifier is a measure of length.  Not "small" stories, not "tiny" or "light" stories, but "short" ones.

But as I've spent more time with the question (and with the kind Socratic aid of Robert Alan Wendeborn and the discussion following a few readings I've attended of late), I've come to the conclusion that it is not at all an elementary one. Not only that, but it no longer seems a matter of length, either. I mean "length" in the way that I have differentiated "short" from its diminutive cousins above, as a measure of distance traveled in a more or less straight line, a sort of hash mark on the imagined narrative ruler -- word 1 to word 3141 = 3141 words: a short story. But, as you will no doubt have guessed from the title of this post, I believe that it may instead be a matter of shape.

Edgar Allan Poe believed (with some cause) that fiction, like poetry, should not exceed in length the attention-span of its reader. His stories were meant to capture and hold the fascination of their audience like a piece of music, thus distinguishing them from novels and other long narratives as librettos are distinct from lecture series. Poe did write a novel/novella, The Narrative of Arthur Gordon Pym of Nantucket, but even it -- provided you were not irremediably bored through the first twenty-thousand words or so -- could comfortably be consumed in a single sitting, and this was an essential part of his design. To some degree, this definition of the short story persists -- a narrative which can be consumed in a single sitting -- even as its contemporary practitioners would almost certainly spurn the reasoning behind Poe's limitation.

For he also believed in a unity of effect, in setting out to produce some emotion or state of mind, and then in arraying all of the elements of his story to producing that one effect in his imagined reader, as though the short story writer were an engineer, not an artist. Whether we concede that this is what we are after, too, in writing "short," or rail against the inevitable, Poe's read of the form is probably the right one. It is the presumption of his process that we decry as naive, possibly pernicious.

Perhaps most vehemently opposed by the very people who, a la Curly Howard, "resemble that remark," Poe's idea of unity of effect finds its analogue in the MFA workshop under the guise of "compression;" that a story should have no jagged edges, no messy excelsior seems utterly uncontroversial even to those who wouldn't dream of ascribing to their work "unity of effect." What is opposed, I think, is the audacity with which Poe pronounced it formula. "If I should want to write a story to produce the effect 'fear,' well then, I shall just sit right down and do so, paying attention to every element of the story and making sure that it goes toward producing that reaction in my reader." As the slush-pile reader or workshop leader knows, this sort of thinking tends to produce over-written, over-determined, predictable stories, and to avoid the head-shaking that must accompany reading them, denies unity of effect a place in the classroom in favor of the more nebulous "compression," "efficiency."

I won't necessarily mount an argument against this attitude (I am as guilty as anyone else in this regard, though I do teach unity of effect, too), though when I was a participant in my MFA workshop, I probably would have. I'll simply say that it represents the rear guard of a losing battle, art vs. craft, the practice vs. the discipline. The reader will make of the short story a unified effect whether the writer wills it or not, and this is a product of its shape, for good or ill. "Short" stories have shape, form appreciable even at the myopic scale of the so-called "average" reader. Unlike longer narratives, whose demands on our attention can be much, much greater, it is possible with the short form to take the full measure of a story, to find oneself equal to the task, to, as I exhort my students, read more than once so that the field becomes clear for the ground covered. Of course this is possible with novels, but it is, even in its conception, a much more daunting task, and thus less likely to be seriously considered, much less undertaken. 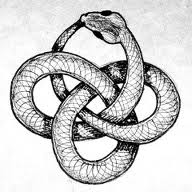 And so I propose that even when the short form does not, ouroboros-like, have its tail in its mouth, it is nonetheless encompassable in a way other forms, the poem excepted, are not (essays are, by their etymology, trials, not results, and so we should be suspicious of those that behave too much like fiction). Circumference, the measure of the distance one covers in returning to one's origin, the product of the quality we began by considering ("length") and an irrational number, pi, one whose exact enumeration is endless and non-repeating (doesn't that sound more like what we are after?), is what we are talking about, a function not arithmetic but trigonometric. 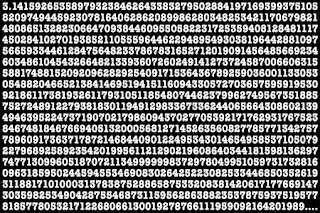 If the short story must be a line, certainly, if it is to be a satisfying one,  it must be one without shadow, without terminus or origin. Don't we begin and end where Homer taught us to, in media res? Never more so than in the short form, where all is media res. And so we, as readers, supply terminus and origin, shadow and satisfaction. We do so by appreciation of the form of the form, by standing above or outside of this thing and turning it in our minds as we would any constructable figure.


I realize I have said much that is abstract, and provided little in the way of proof, and so I will end this post, this series of posts, with an example: John Madera's "Notes Toward the Recovery of Desiderata," in the latest issue of Conjunctions. It is a story that begs to be turned over, flipped about, turned and returned, a story whose first sentence is:


This being something about closed doors and opening windows; or, this being an omnibus of memory's debris, history's talus, and desire's residuum; or, this being a brooding topographyof perception and a cross-section of time's strata; or, since there is always a forgetting in the remembering...

[which sentence continues onto a second page] and which story concludes some 15 pages later:


What you have, instead, is something with a lot of holes in it, each hole a kind of scotoma, an obscuration of the textual field, something chockablock with porous words like doors, brooding, look, blood, choosing, logos, schoolgirl...schoolroom, tobacco, rococo, hooked, swooning, nook, doom, fool, unmoored, scotoma, and porous.

Rest assured that the 14 pages between are not simply anagram or half- blank crossword. They are full of life, history, full of narrative and incident. But we find satisfaction here because the distance traveled is not so great that we find ourselves on this near shore with no memory of the far, of our embarkation and our route. The pleasure comes in recognizing just where we began ("doors") in this ending ("porous"), seeing the contours we have traveled in getting there, contours that would be as invisible in a larger ("longer") work -- at the very least, difficult for most readers to discern upon a first reading, like asking an ant what shape the Superdome is (mushroom-cloud-shaped, for you sports-heathens, though ask an ant what shape a mushroom is, and you're likely to find yourself doubting your understanding of the shape "mushroom"). For that ant, the answer is likely to be "flat," just as we perceive the earth's surface, just as we perceive the "unraveling" of the epic as taking us in one direction or another. We do not have an analogous expectation of the short form, and this, I believe, is because we have a different appreciation for, and different demands on, its dimensions, for its contours and, yes, its shape. Regardless of its heft, it is something we feel we can lift, something we can turn, something whose design, while perhaps still ineffable, bears more or less immediate rewards to those intrepid enough to investigate. It is in some ways a human scale, given that we understand our consciousness as a mistake, distraction as oeuvre rather than detriment.

And yet I certainly would not want my own reader to come away thinking I believe that the short story is a lock to which we naturally have the key, any more than anyone would say the same of the poem. The quantity of facets to a cut diamond is limited by the skill of its craftsman, not by its size, and it is no less sharp at one than it is at a hundred. A true appreciation of the form should lead to sophistication, not dissatisfaction or disillusionment.
Posted by Gabriel Blackwell