In truth, I can’t see the difference between the collection of stories and the novel-in-stories; the delineation seems to deny our strong natural impulse to synthesize. That they have been collected under the same cover gives the lie to their supposed discreteness in the former case, and (along with the plasticity of the genre itself) makes the latter seem redundant. Literally and properly understood, stories collected in any wise are all one thing anyway; if the author or the publisher views book publication solely as a valedictory exercise, the reader is much better off directing his/her attention elsewhere.
Whether we blind ourselves to it or not, we’re all always writing the same story, over and over. We’re all Proust, setting out on our Recherche, and our oeuvres, such as they are, are ours and ours alone, whatever they encompass. To pretend otherwise is to deny ourselves an important tool in the making and imparting of meaning. I think that the often fragile matter of making those connections explicit almost without exception reveals the flimsiness and utter disposability of the writer’s conceit. I mean that the novel-in-stories typically leans far too heavily on the prose’s rather dubious relationship to “life as we know it,” and loses most everything its structure has reclaimed in the process. There are lacunae, yes, in our understanding of the character and measure of our fellow men. Yes, the facets of personality can make the people we are most familiar with seem strange and unpredictable. And yes, those people come and go in our lives—we come and go in our lives, for that matter—but all of this seems much less profound than the structure that must inevitably accompany such a humdrum revelation: that white space, chapter headings, page breaks, divisions of whatever kind can seem both discrete and part of a whole seems a far more important insight into consciousness, to how we experience the world, than that “people are people.”
We need no empirical evidence of that; it is our raison d’etre, the basis for our biological imperative; in short, a truism. It stings as little, and fades as quickly as so-called “observational comedy”—did you ever notice that those observations we are most likely to share with heterogeneous audiences are also those that pass into and out of our minds at the same rate of speed as the smell of our own skin, the frame our glasses make of our field of vision? If the quality of one’s thoughts is barely above the level of sensory impressions, it hardly seems just to call them “thoughts.”
There thus need be no through-line, no unity of character, no further artifice beyond the most fundamental one: that of words on a page and their tangled relationship to the processes of mind in their recorder and his/her audience. Take as example Matt Bell’s How They Were Found. 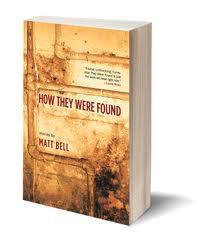 We begin with “The Cartographer’s Girl,” one of my favorite stories in the collection. With its symbols planted on the Borgesian map of the story (“+is any hospital she went to before he met her”; “x is the store where he bought the ring he never got to give her”), it is itself a key, a legend—and notice that the proper words for the story’s form are metaphors: endemic to, but also illustrative of, the story’s conceit. That it maps the disappeared, a seeming paradox, is not a failing but a reference to the guiding principle of the collection. All of the stories here are, in their own ways, records of searching and of failure, homunculi of human enterprise. There are inventories here, lists, schemata, of course narratives—all manner of meaning-making goes on. But the complement to that meaning-making is not definition. It is memory-loss. It is obsession. It is disappearance. It is delusion.
We get more and more interior as these themes deepen (in the revealments of "His Last Great Gift," in the delusions of "Dredge," in the recursions of "Wolf Parts," in the literal homunculus of "The Leftover"), until we are tunneling through them, on our hands and knees along with Langley in"The Collectors," buried in failure. How They Were Found is, as its title suggests, a quest narrative, perhaps the quest narrative, if we invoke Joseph Campbell. We don’t need the characters to be continuous or even contiguous; when D.W. Griffith popularized filmic editing, he was only incorporating something that had always been a part of narrative—we, the audience, are not only capable of connecting the dots, we are positively famished for it. That How They Were Found ends with an index seems natural. We have experienced it as one narrative throughout, no matter how we may have come to it. Now let us have a summing up:

This is not to say that the uniting conceit of the collection of short fiction need be a product of its structure, but that it is, whether we will it or not. Those attempts to strengthen or else augment that conceit fail because they usually pale in comparison, not because they are themselves shaky or insufficient. There are, of course, exceptions. 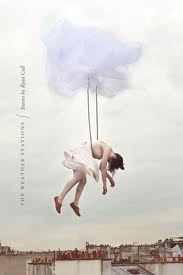 Ryan Call's The Weather Stations succeeds in this as in much else. Its conceit is innocuous enough to cede the foreground to other concerns -- what could be more innocuous than the weather? -- but also startling enough to force strong reaction: the weather of The Weather Stations is neither natural nor un-. It is supernatural, an order above, and it rules the world of these stories, bringing them together much more efficiently than a more traditional conceit (character, place, or plot) would.
One can imagine a Winesburg without a Willard or even a Winesburg, a Montana on the page -- all sky -- and one would be close. In some way, every character here must reckon with the weather, must carve out some sort of shelter, find the calm of the eye, or perish. There is a sort of an Eagle here, a sort of a Helen White, a sort of Doctor Reefy, but they are elemental, not conscious, and that is, I think, what makes this particular conceit so successful. Rather than content itself with yet another tired pronouncement on the human condition, it tries to light that condition and give it its proper thunder.
In this month's Believer, Victor LaValle says:

One of the things I'm always telling my writing students is that they should find ways to externalize the internal dilemmas of their characters, of their books. If they externalize the dilemmas, there's a chance that something might actually happen in their work, and I have a selfish desire for that, as a reader. But I also push them in the hopes that they'll create a beast of some kind, whatever that ends up meaning to them, one that any reader might understand on the deepest level, instinctively.

What is perhaps different here is that Call does not create a monster so much as renew one. The incredible power of stories like "The Architect's Apprentice," "Our Latitude, Our Longitude," and "Consider the Buzzard" comes from that strange dichotomy: that something can be so utterly unpredictable and utterly banal at the same time. It is mythical.
Oddly, the story that I paid perhaps the least amount of attention in my first reading, "Anvil," is the one that I most often return to. I think that is a result of the collection; that is, on its own, I might have read "Anvil" as interesting, as accomplished, but not given it a second or third thought. But in context here, it takes on some of the qualities of its namesake:

As Anvil's strength grew, our appreciation became tempered with fear, a trembling kind of respect for the power he wielded, for the potential he carried... We didn't know a thing about Anvil's work except that it had saved us numerously, yet we had seen the effect it had on enemy troops, effects that exceeded the bounds of normal, humane combat... We saw soldiers with skin sloughed clean from bone by the punishing waves of sand Anvil had created. We came across obliterated puddles of men who had suffered the pummeling of ice and hail long after they had run out of ammunition. We watched miniature tornadoes sweep the streets, ripping limbs from sockets, twisting bodies in coils of barbed wire, gulping landmines and spitting their shrapnel skyward, churning soldier and civilian alike into turbid masses of pulp and metal.

Because it is able to funnel the narratives around it into it, "Anvil" acts like a hurricane crossing the Gulf of Mexico, gaining force along with the weight of its water. It becomes clear through the context of the collection that Anvil is not just some grunt cursed with a Cloud Harness, but a stand-in for the Creator. When the soldiers call up, "What do you want?" to Anvil in the clouds, he replies, "I want the world to disappear... I want to be left alone." And these words, rather than seeming cliché, take on a disproportionate importance, give us a lens through which to understand the distancing at work in the other stories.
That, it seems to me, is the strength of the collection, that the context it creates lends each of its parts some added importance and depth. The parts of the whole should have their own weight and heft, but the collection, as the universe, needs the harmony of gravity to pull it together and keep it in relative balance. This is partly a natural result of placing things in such close proximity, but, as with collision and collapse, as with entropy, also a matter of choosing judiciously with an eye toward that final harmony.
Posted by Gabriel Blackwell