Today I went to the library. I decided to do this because our landlord requested to show the apartment to a prospective renter's mother, who would decide whether her daughter would take over this place after Sarah and I leave. I could have stayed in the apartment but who wants to sit around drinking coffee while a stranger shows another stranger the hallway, the bathroom, the dining room without a table, especially when that second strangers is not even the person who will inhabit the space? Weird. Anyway, I had just paid off my eight-dollar library fine, which wasn't enough to keep me from checking out books but was enough to earn me a talking-to from whatever librarian happened to swipe my card, and now there was no threat of browbeating, lecturing.

So I went to the library, feeling sad about my pretty, expansive, noisy, hot, strangely colored apartment, and about the city around my apartment, which could adopt those same adjectives, and I decided to write about the downtown library, and then I decided to review it.

SADNESS: The only library I've been in that hasn't squelched with sadness is the Rod Library on the University of Northern Iowa's campus. It is made of four floors, each appearing to exist in a separate slice of time, so that you start in the burnt-orange fuzziness of the basement and climb a set of stairs or ride one of the tiny shaking elevators up to the glass and polished wood of the fourth floor. People sleep everywhere, and they look peaceful doing it, and nobody hassles them. People flirt across work tables. Even the people shoving carts of hardbacks look happy.

But most libraries are sadder places, and Orlando's main branch is no exception. You approach on a sunshot street noisy with traffic and the library's bulk hulks ahead, gray and matte against the blue sky, and you think, that's not so bad, and then you turn and you think, It's a bunker. 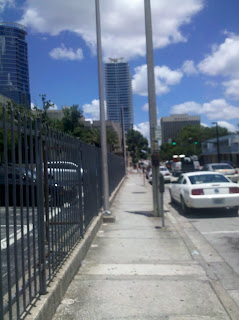 It's an attractive bunker, at least, in an attractive part of town. A wide domino of concrete juts out over the main doors, and it is usually festooned with a gaudy advertisement. Last year the library and an artist put patrons up on the awning to read their favorite books into microphones, to the passersby and to those with nowhere to go who wait in the awning's shadow. I considered applying to read Candide and then imagined myself up there at 9 in the morning, waving to Sarah, Take the picture! 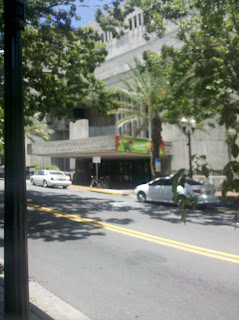 But it is a sad bunker, too, and the sidewalk beneath and the spaces inside are filled with backpacked people who look like they would like to rest somewhere more comfortable than at the library. The water faucets operate with unpredictable force, and the computer area is clotted always with users. The colors of everything are comfortable, but not too comfortable, in the way the walls of a grandparent's house are inviting but not too inviting, not enough to make you want to stay. The furniture is such that after an hour of reading I was ready to get up and move. As at any library, books lurk everywhere, long untouched.

So there is a fairly steady creep of melancholy in this library, sometimes undetectable but all the more sinister for its stealth.

EXTRA STUFF: Some libraries give themselves over wholly to their books, and others devote space and time to instruction, meetings, shows. Our city's main branch seems devoted to reaching into the community, pulling people in. A few minutes ago someone from the library tweeted in interest in finding local bands to play, presumably on this stage: 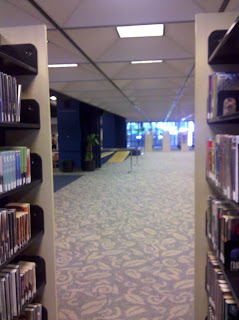 There are rooms in which you can vote when it's voting time, and rooms in which you can see authors speak. (I saw Laura van den Berg read from What the World Will Look Like When All the Water Leaves Us here, in a room inexplicably lined with caricatured beer steins.) There are classes, but with titles like eBay Buying and eBay Selling. My favorite feature of this location is a small café, just off the lobby, in which you can buy a one-dollar coffee to drink while reading your books and trying not to spill all over them. You can buy a fairly cheap bagel or a salad or a breakfast sandwich and try not to crumb up the pages of your hardback. The walls are lined with blown-up comics featuring coffee. Some of the walls are flimsy pieces draped between the tables and the main collections table, the observation of which horrified me at first, as if at any moment a raving librarian may burst through, Kool-Aid Man style. I wanted to take some pictures in this café today but the place was full of people who may have been concerned about a fairly disheveled man taking shots from the corner.

COLLECTION: It is weird. The collection here is weirder than at anywhere else I've been. It is usually unlikely that a book you come for will be in, even if it was supposed to be in (most books not listed in the online catalog as checked out are listed not as available but as check shelves, which may as well read maybe), but it is likely that a book you didn't know you wanted or that you'd forgotten you wanted will be there. Today I found Ben Percy's novel, which is not so weird, but I think of him as up in Iowa (he teaches now where I went to grad school) and didn't expect his name on these shelves. I also looked for an Arthur Phillips novel and found this instead: 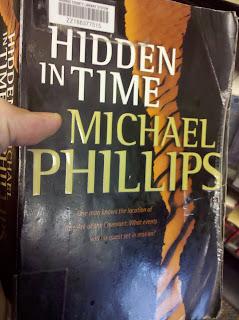 "One man knows the location of the Ark of the Covenant!" This seemed much more exciting and silly when I took the photo.

I intended to complain here about the music collection, as its shelves are even more unpredictable than those that house the books, with CDs just gone, seemingly forever, and with everything jumbled together by first letter, so that you will never, never find anything in a precise or even close-to-precise alphabetical order, will never find Mi after Me after Ma, but today a library employee was finally fixing this problem, and talking to herself while she did it, and to me, and to anyone else around. Last time I tried to pick up a few albums I was stymied by a guy with a basket who seemed bent on filling it indiscriminately, click click click, scoop, rearrange, and today there was a woman cleaning things up! It was amazing! I still couldn't find any of the discs I'd hoped for, but still: hope.