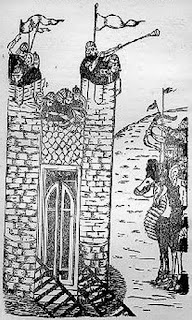 Last week the local paper carried a series of articles about a young guy who stabbed a bouncer at a bar downtown. The first stories were illustrated with a photo of the suspect being lead out of the Orlando Police Department in the thin bright light of the following morning, his head down, his hair still stylishly mussed, his dark clothes and silver necklace as sort-of silly as any club outfit seen in the light of the day after. The first stories were more about him than about the murdered bouncer, and after seeing the photo one of my first thoughts was of how miserable it must have been to wake up not just hungover but in jail, and not just in jail but with the memory of killing someone the night before, at the height of some fight-maddened drunk. (A few days later someone else, the suspect's brother, confessed to being the real killer, and traded places with his brother outside a courthouse.)

The last story in Jim Shepard's You Think That's Bad is about Polish winter mountain climbers, men who, like a lot of Shepard's characters, have given over all their pleasure and passion to a single pursuit that will surely undo them after enough time. In "Poland is Watching," the narrator and his colleagues attempt to take a nearly unreachable summit, wading through snow and bunking tight in tents at twenty below zero. The narrator tells us that waking in the tent "is like waking in prison after having done something awful the night before," and when I read that I thought of the stabbing case here in Orlando, and of all the rest of the stories in You Think That's Bad. If you've read Shepard's other collections, you know he regularly recruits characters who doom themselves, who move purposefully toward their own destruction and who don't even seem surprised when they realize they've almost reached it.

I meant to pick just one of the stories to write about (for Short Story Month!), but instead of tearing up one and analyzing it I'm going to write about a few that I enjoyed most, and which I recommend. They're all good, but some of them I enjoyed more than others. Shepard seems to value veracity above plot sometimes, and loads his stories with the kind of details that make you nervous to imagine the research put into each page, and sometimes the wash of place names and dates and historical events and jargon hits like an overpowering wave, too hard to swim against. The book opens with "Minotaur," a short piece about the secretive lives of two employees of the "black world" of secretive military research and development; the piece examines how the screens they've put between themselves and their families affect their lives, and by the fourth page, when they're exchanging acronyms over a bar table and a wife says, "Oh, for Christ's sake . . . Don't talk like this if you're not going to tell us what it means," I agreed with her. Of course, Shepard's characters would probably tell me, as a mission patch in the story tells everyone, that it's "NOFYB. 'None Of Your Fucking Business.'"

What strikes me about these few stories that don't work as well is how carefully they're still made. I trust the writer, I mean, so I'm curious about how he balanced his idea of verisimilitude with his idea of good storytelling, and if he consciously decided at points to tip the balance one way or another. Anyway, here are the three stories whose balances I most enjoyed:

"The Track of the Assassins" takes place in the first half of the last century, and is narrated by a fictionalized version of the British travel writer Freya Stark. Like many of Shepard's best stories, this one structures itself as an alternation of desperate exploration scenes with memories of what got the characters into them. Here, Stark shuffles through the desert with two guides in search of the lost fortress of the Assassins, and it's a testament to the characterization of the narrator that by the end I was more interested in her memories of her lost sister and her distant mother than in her wearying progress through the badly charted sand.

"Happy With Crocodiles" is similarly structured—it bounces between a soldier's slog through the muddy jungles of World War II and his weird relationship with a woman back home, with whom his brother is probably also having some kind of relationship, and ties the past and present together with worry about the faithfulness of the woman and the faithfulness of the brother, who wears pilot's wings on his uniform and seems too often able to return home while the narrator is perpetually away, forced to wade into rivers "happy with crocodiles," to eat rations soggy with the constant rain. The narrator is obsessed, despite himself, with the injustice of the situation, and when he's pinned down toward the end, in a shallow hole with the enemy thick in the trees ahead, his probable doom is not really a surprise to him or to us.

"Classical Scenes of Farewell" opens bang, crazy, a list of confessions of witchcraft, of sleeping with he-goats, of bartering with devils for strange salves, setting up the narrator's confession of his own atrocity, not supernatural like the ones listed before and thus infinitely more horrible. He tells us his name, and his heritage, and that, along with another servant and their master, he has been "responsible for the mutilation and dismemberment and death of one hundred and forty-two children" since 1437. (I had a sinking realization here that I'd read the story before, in a magazine, and I had, but it's good enough that it was easily worth reading again.) Etienne goes on to detail how, after his mother's death, he was given up to a local lord, who nearly killed him before sparing him for his potential as a servant. Etienne and another servant, Henriet, are charged with finding boys and sometimes girls for their master to abuse and kill, and with disposing of the bodies, and with finding an alchemist and then a conjuror when their master's fortune fails. Etienne relates the story in a way that builds our sympathy for him—it's hard to imagine him escaping, and impossible to imagine him escaping into anything but fatal poverty—but, after reading his confession, Henriet points out that Etienne "wrote that he [their master] had this or that person's throat cut . . . But you neglected to indicate who sometimes did the cutting." In the end he and Henriet and their lord are doomed to burn and consigned to their fate, as are so many of Shepard's characters.

As you can probably tell from reading these summaries, there's a pattern to much of the fiction in this book, a dark fatalism governing the plot, but it's a testament to the stories' development that they're still surprising, engaging, vital. They're enlivened by carefully voiced characters, and by close attention to environment, and sometimes by awful humor. In the first page of "Boys Town," we get this exchange between a mother and her son:

"So what's the deal with dinner?" sometimes I'd say. "You have a busy day?"

"That's Hut, you fucking idiot," I'd tell her back. And then she'd say something else wrong the next time, just to frost my ass.

I was thirty-nine years old and living with my mother. I hadn't had a good year.

That story starts off sort of bright—I had a feeling reading it that any story here that started with such dark humor would surely edge toward comedy—but then tilts dark, and darker, until the narrator is firing his prized Desert Eagle into a neighborhood window. The narrator is genuinely scary, the kind of guy you'd worry about for an hour after seeing in the street, but, like all the characters here, he's real, and sad, and you, the reader, feel sorry seeing him struggle against his own doom, which was always inevitable anyway.