The Genres of Length

If I hadn't already planned to do this post, Robbie's post ("Why?") and Mike's answer ("Hobart is Why") would have been prompt enough for it.
This may sound anachronistic or just plain stupid, but I am constitutionally unable to write "flash" or short-short fiction. I have only been successful at the < 1000 word genre (on which choice of label, more below) when taking as my subject nonfictional material, and I believe this has to do with that material's inherent opening-out, i.e., the possibility that my use of that material will inflate its asphyxiated expression into something worth writing for me, the writer, and worth reading for you, the reader. Don't misunderstand me: this is a personal tic; I don't have any biases when it comes to reading fiction (though I will admit to a certain weakness for books in the 170-220 page range; they just feel right in the hand, in the palm of the mind). But my own short work, unless of the (non)fictional stamp, seems to me to fail to ever take on that lacquer of lived experience, the patina of a kind of truth, that longer narratives must have by default, and is thus unsatisfying to me. Usually, I don't bother.
The short story is a genre. The novel is a genre. The haiku is a genre. The limerick is a genre. The short-short is a genre. The prose-poem is a genre. I mean that, like those generic ghosts of the now-haunted video store, sci-fi, horror, comedy, drama, documentary, etc., we have expectations when we come to them, whether those expectations are conscious or not. Our understanding of what it is that we are reading has nothing to do with length and everything to do with the weight of history and our particular familiarity with it. We do not scan ahead to read "The End" and calibrate our reception according to its proximity; instead, that calculation is based upon our perception of the author's intention. Allow me to present two ~recent examples. First, though, as always, a digression.
I had wanted to consider the question of some kind of hybrid genre, provoked at least to some degree by Mike's professed preference for novels over short stories. What, exactly, was the difference, I wondered? I wanted to say that this wasn't substantially different from the commonly held bias against science fiction, or fantasy, or romance, or literary fiction, or whatever genre one doesn't like. But I know that Mike knows this, and I certainly didn't want to hold him or his reading preference up as straw man. Rather, what he was expressing seemed to me a preference for just that patina I spoke of above. I share that preference, though I cannot say with equal confidence that I prefer novels over shorter work.
I've spent the last year reading much more short fiction than I had ever done prior, on my way to completing a collection of shorter work (in the breach, a novel that remains unfinished -- does this perhaps point to some inscrutable process at work in me? Afferent or efferent?). I cannot say that I "missed" novels, though I did on occasion feel the pang of slightness in my reading. Again, it was not the pang of brevity -- the soul of wit, how could it be otherwise than pleasurable? -- but the pang of a lack of care, a lack of concentration, and a corresponding lack of depth. Novels, almost as a rule, have these things generically. Their writers have had to live with them for a matter of months, sometimes a matter of years, and there is something of that in them, whether it is willed or not. Time is somehow appreciable in the artwork itself (poorly constructed works are considered "rushed," are they not?), so it stands to reason that a breadth of time can be appreciated in the depth of the work's conception (although of course there are exceptions on either side). In general, novels simply aren't composed, much less completed, in less time than are most short stories, and the editing process is often exponentially longer (again, I am perfectly aware that there are exceptions to this, as there are always exceptions to any generic rule). I try to be a careful writer (at least, in all but my blog posts), and so my preference will always be for those things that exhibit care, whatever their length.
But to the examples:
In its evolution, the short story seems to have experienced something of the island effect ("Foster's rule" of evolutionary biology). "The Turn of the Screw"? "Bartleby the Scrivener"? They would be called novellas today, perhaps even novels. And because of length restrictions, most, if not all, university-sponsored literary journals wouldn't even read them (the Seattle Review's novella-only policy is the only exception that comes to mind, though even they wouldn't take a look at "The Turn of the Screw" -- it's more than 90 pages in my Library of America edition of Complete Stories 1892-1898). Now, of course, it's relatively rare to find anyone who will even look at anything over 5000 words, and many definitions of "short story" (at least according to respective submission guidelines) would put its limit at 3000 words, which seems incredibly short to me. I don't say this is necessarily a bad thing, though it is as pernicious as any bias is; at least there are still plenty of outlets for this kind of work (The Cupboard, for instance, or MLP's Nephew, or any number of chapbook presses), even if they aren't the places that the genre's enthusiasts typically go looking (i.e., those same university-sponsored literary journals). Naturally, this tends to solidify those generic boundaries, and to reinforce the biases of readers suspect of things out of their narrow scope of professed interests. But, by some miracle, there are still writers pushing back. 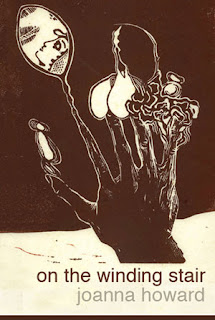 Joanna Howard's collection of short fiction,  On the Winding Stair -- in terms of word-count, shorter than "The Turn of the Screw" even in toto -- contains one explicitly-labelled "novel in shorts" ("Ghosts and Lovers") and a number of novel-like stories ("The Tartan Detective" and "The Black Cat" prime among them). All three of those just-mentioned pay visual homage to the novel, with chapter headings, generous white space, and page breaks, but it is the obvious care lavished on all of the narratives here, and something also in their careful conception, that marks them as ungeneric.
But, one wants to ask, would we, if not for the author's explicit warning ("A Novel in Shorts"), approach them as anything more than short stories? This is where the lie of the generic boundary comes so clearly into focus. What is the difference between a short story and a novel? Here, one can't be so sure of him/herself when sticking to definitions based on word-count or page number. The question is revealed as spurious, the same as any bias both in its lack of any truly global applicability and in its logically-indefensible foundation. It is the marker of the bias-holder's history of disappointment with the genre, not a predictor of future outcomes of his/her reading.
Regardless of literary merit, one might say, with the compression of narrative inevitably comes a corresponding size problem: One finds fewer opportunities to fit oneself into something so slim; there simply isn't room to inhabit a short story in the same way as a novel. To this argument, I would advance a peculiar but peculiarly rewarding book, one of the best books I have read this year, Yuriy Tarnawsky's Like Blood in Water. 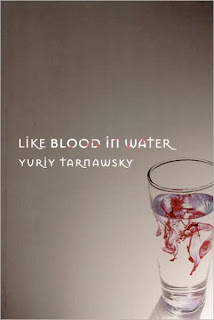 Though you don't find out until the second title page, Like Blood in Water is subtitled "Five Mininovels," a subject (the mininovel) I was lucky enough to see Tarnawsky lecture on at AWP in 2010 and which lecture caused me to buy this book. What is interesting in the context of this particular post is that each mininovel (they range in length: the shortest is 15 pages and the longest is 58) does indeed have the feeling of breadth that seems a generic condition of the novel, even though its actual breadth is much slimmer. Even more fantastic, though, the mininovels play off of each other in the way that mirrors give perceived depth in shallow rooms. The echoes of each previous mininovel allow more and more points of entry into later mininovels for the reader.
As addendum

I can adduce proof of this: when looking up the page lengths for my parenthetical above, I had really and truly believed that the final one, entitled "Surgery," was somewhere around 100 pages. I can remember my experience of reading it and thinking that it couldn't possibly be considered fodder for a post such as this one (for even then I was considering what I should call these, if not mininovels). A novella, I remember thinking, in length if not in intent. But, at 58 pages, it is intermediate even between short story and novella, proof, as I say, that length is only an indicator of genre, not at all one of intent.
Posted by Gabriel Blackwell