Infinite Jest on the Kindle

I got a Kindle! It was a gift from my family. I wanted it for several reasons, chief among them the increasing physical difficulty of reading books, the constant access to a library of free classics, the appeal of a portable library, and the possibility of actually reading Infinite Jest. We'll focus on that last item for now, though I think it speaks for the appeal of electronic reading devices more generally. 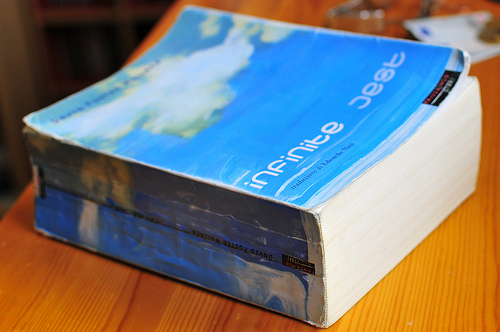 I first attempted Infinite Jest in the summer of 2006. This was also the summer Tracy and I started dating, though we had known each other several years, and I would not ask her out until near the end of the summer. It was my first time living alone, in an apartment Butler university had provided for me, along with a wage and free air conditioning, which I used to keep the empty-except-for-me apartment at something like 63 degrees. I spent most of my days writing (a script, and a novel) and not talking to anyone. I ate small helpings of smoked salmon, baby carrots, raspberry or key lime pie yogurt, and Sour Punch Straws. I drank Dr. Pepper Berries and Cream and Coca-Cola. I lost a lot of weight that summer. I found a lot of music.

I had found a copy of Infinite Jest on a free books pile in the English department toward the end of the previous semester. I thought the cover looked stupid and the title didn't suggest anything special. (I supposed there would be a lot of jokes, perhaps a farcical epic, like if Terry Pratchett wrote social realism.) Mainly I noticed the book was really thick. I figured the cost of producing such a volume and shipping it would be prohibitive unless one believed in the product, which is the sort of crude math I often use to choose books. I picked it up. I planned to read it that summer. I had no sense of the book's critical reception or importance.

Like most people who try to read Infinite Jest, I failed. People talk about the endnotes but that wasn't a tremendous problem -- I've got two thumbs. For me the real issue was more my eyes were failing (I didn't understand this at the time; that was next semester) and the text in that book is terribly small. Also the book was tremendous. I couldn't find a way to hold it. My body burns hundreds of calories daily maintaining an unreasonable heat, such that no one part of my skin can comfortably touch any other part of my skin for long at all. This turns out to be prohibitive of most positions wherein one can read a large book. Between the density of the text on the page (to say nothing of the increased density of said text in the endnotes) and the fact of my imperfect attention span, which often led me to glance away from the page for whole milliseconds, which in turn led to me completely losing my place in the book, which meant that I never quite knew what I had read and hadn't read on a given page. I got maybe a hundred pages in, trusting I would begin to enjoy it at some point in the distant future. Then I gave up. I gave the book away to someone else who seemed to want it more.

I understand some people, perhaps many, read the book with a highlighter in hand, turning each line yellow as they complete it. I find this idea maddening, not only because of the thought of the smell or the number of highlighters this would consume, or even because it's difficult to see how the book itself could survive such a thing. At the same time you can see why a person would do it. Why they might even have to. You don't read Infinite Jest so much as master it.

Which brings us, finally, to the Kindle. Infinite Jest was the first thing I purchased once the device had been registered and charged. I spent a couple hours with it tonight and already I'm maybe about halfway to where I was when I gave up before. I knew it would be easier because of the physical form of the device itself -- the manageable size, the pleasant weight in my palm -- but I hadn't accounted for how the device would serve to make the reading more manageable. 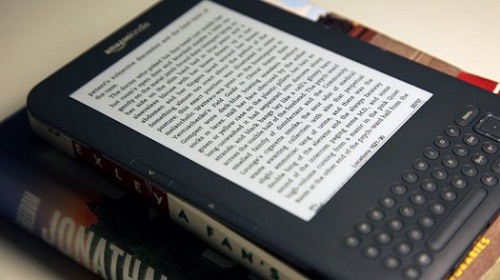 If you haven't seen this yet or read up on it, the Kindle is easy to imagine as a fancy PDF viewer, which it certainly can be. This is however misleading. There aren't pages in a Kindle document. Instead there's text. The text and the device interact such that at any time you are looking at what seems to be a page, and when you hit the "next" button you see what seems to be another page. But because paper is no longer a concern, because the cost of shipping is irrelevant, because the text itself (and some rules about generating its presentation) is the file's content, we can have as many of these "pages" as we want. These pages can be in one of several font sizes, and so a "page" can contain a fairly wide range of words.

What this means is that when I'm reading Infinite Jest I no longer face the abject terror of looking down at, say, twenty paragraphs on a page, or fifty lines, or whatever it was. (A lot, is what I'm saying.) Instead I have several paragraphs of reasonable width and spacing, or even only one section of a large paragraph. I can read this from beginning to end in very little time, and so I always feel as if I'm making progress. If I don't understand something or if I miss, say, a name or a bit of scene-setting, it's no trouble at all: if I need to, I can reread the whole page to see what I've missed. It's not that much text.

You can think of this as another example of the dumbing down of America but a) I like to think I am a reasonably talented reader and b) go to hell. Kurt Vonnegut wrote several decades ago about the extreme difficulty of the task faced by most readers and the necessity of making it more easy wherever we can. That doesn't mean you don't write Infinite Jest. It means you present Infinite Jest in a way that makes it as easy to read an incredible masterpiece of boundless ambition as one can make such a thing. I have currently finished, according to the Kindle, about 4% of the book. If I read it every day at my current rate I would finish the book in 25 days. I don't find that daunting because, again, of the smallness of these pages, of how manageable they are. It's the same amount of text, but it's no longer such an intense physical struggle. 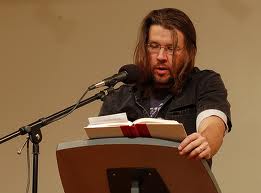 One implication of this is that a world with more people using electronic readers is a world with less reason to fear ambitious writing. If we don't have to print the book, if we don't have to ship it, if we don't have to pay to do these things, if shelf-space is not a concern, what's to stop us? And if readers have a flexible text, one that they can manipulate to suit their needs, isn't it more likely they'll go to the trouble of reading? I have never felt that I would have the patience or energy to get through War and Peace, but I've downloaded it to my Kindle. The device immediately made me more ambitious as a reader. I suspect this is the case for other users as well. I know it has been true in my family.

And while I feel somewhat heretical suggesting Infinite Jest is better in electronic format, I do believe it. You don't have to read many books to find examples of the many ways a page is poorly suited to fiction. We don't usually write with the page in mind, after all; in fact, we have to avoid it, have to write paragraphs that will make sense no matter where they happen to fall on the page. The natural form of prose is a scroll. We shape it according to the practicalities of page count, of format, of shipping, and so on. But why should we do that if we can shape our text according to the needs of the reader? If we can let the reader do it for us? 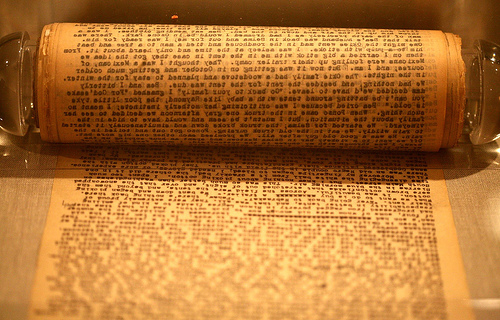 To be sure, the Kindle is an imperfect solution. The format is not sufficiently flexible, and Amazon demands too much power over our reading. These are real problems that will be solved, I think, within ten years. But what I suspect we're moving toward is a world wherein digital reading becomes normal for habitual readers, and wherein most books, which are perfectly happy to be scrolls, are happier in that form. Better to use, and better to be in the business of selling. Infinite Jest is a book that belongs outside the book. Print will be useful as an option for some reading, not all: for that which most needs a page, or for small and manageable books that feel good to hold in the hand. Or something like that.

I'm not especially interested in prognostication, except to the extent that it might help me predict the market's movement, such as it is. What I'm interested in, for the moment, is the fact that Infinite Jest, when freed from a format where it was never really comfortable anyway, turns out to be a spectacular read. I mean, just tremendous fun.
Posted by Mike Meginnis