So let's start thinking about our formative reading experiences as kids. I spent most of my time reading as a kid (I literally couldn't possibly approach the sort of reading schedule I used to keep anymore; I have a wife, work, and sleep to think of), so this could take a few posts!

Kids like series. I'm not sure why, exactly, beyond the fact that if you liked something once it's easy to imagine you might like it again. I would eventually find my way to some of the more popular series, but I started with The Three Investigators, a series whose appeal probably relied on three factors: wish fulfillment, likable characters, and the mystery format. Apparently the series was originally called "Alfred Hitchcock and The Three Investigators," which kind of blows my mind: apparently the idea was that Hitchcock had some involvement in dictating the books. I got into the series after a revamp which aged the kids (originally 13-14) to 17, which was exactly the right age for me at the time.

The characters were Jupiter Jones, Pete Crenshaw, and Bob Andrews. I can't tell you much about Pete or Bob from memory (I think Pete was the handsome one? Wikipedia tells us he liked to say "Gleeps!") but Jupe was a good balance as a lead character: he was the smartest one and the leader, he knew judo, he had a girlfriend, and he could drive a car, but he was sort of goofy and a little fat. I was actually stick thin as a kid and runty, but I've always identified with chubby characters, which feel like a concession to the lameness of real ordinary people like myself. Anyway, basically all three kids were supermen if you paid any attention but the books were written such that you could pretend they were just normal dudes, and it made for some pretty nice escapism. Then on top of that they would investigate a mystery and maybe punch a robot. I loved these.
Great Illustrated Classics 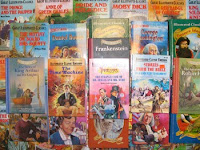 Nobody I know is familiar with the Three Investigators but everybody my age or thereabouts seems to remember Great Illustrated classics. These were highly condensed and simplified versions of classic novels with an illustration on every other page. A kid as bloody-minded as myself could read one in an afternoon. I read The Three Musketeers, Swiss Family Robinson, The Hunchback of Notre Dame, and a bunch of other stuff I don't remember anymore. Which is to say I thought I was reading those things when really I was reading some pretty lame little impostors.
One interesting thing about these is that while they no doubt elided many adult details of their plots they didn't really clean up the broad strokes of the plot very much; Phoebus is still a jerk in Hunchback, still gets stabbed by the creepy religious dude, the ending is as far as I know more or less accurate, bones clutching each other in the dirt. I wasn't learning as much as I thought, but at least they didn't misinform me!
Little House on the Prairie 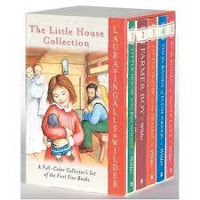 Man I can't really tell you like anything about these anymore. I remember feeling vaguely embarrassed to read what I was pretty sure were supposed to be girl books -- the author was a woman and everything! I mainly remember enjoying the descriptions of how they built their home, avoided starvation, stored food over the winter, etc. I remember the older sister (Mary?) made Laura feel bad by saving her entire heart treat (white-flour-filled, with a little bit of sugar) while Laura had to sneak a nibble from the underside. Not sure how far I made it in these. I think I remember trying to read Farmer Boy and ironically that was the one that just bored me to tears and may have defeated me.
The Hobbit + Lord of the Rings
I think I read these too young. The Hobbit was pretty manageable, but I don't really remember much specifically about the plots or characters in the other books that wasn't reinforced by the movies, apart from some memories of spending rather a lot of time reading about lengths of ropes and leaps and so on in the bits where Frodo and Sam are climbing the mountain with their bare hobbity hobbit feet. I was a nerdy white kid so I was pretty sure this was the sort of thing I would end up writing.
The Baby Grand, the Moon in July, and Me
I'm confused about this for a number of reasons -- I don't remember anything of the title apart from "The Baby Grand," the cover on Amazon is way uglier than the one I remember, and it apparently came out in '98, which would mean I read it at twelve (yeah so I'm young) which doesn't feel right. But the premise (young girl wants to be an astronaut, teenage brother wants to be a jazz musician, he buys it on credit, also there is a reclusive older neighbor) sounds right, apart from the astronaut part, which I really don't remember. Anyway this was one of the first literary books I remember getting much pleasure out of. The characters' specific desires are of course immediately interesting, I was always into reading about poor people (being a poor kid myself), and I think this was probably the first book I read that was really about black people, or that I realized was written by a black person.
The Butterfly Dreams

God, this one's embarrassing. It's about, like, how the world is imagined by our souls, or something? Spiritual chaos theory? I was trying to "level up" my reading and while that mostly took the form of a few Ursula K. Le Guin books (good call,  young Mike!) it also meant some philosophically-driven, rather crappy fiction. I thought this book was brilliant when I was about thirteen, and would spend several years attempting to accomplish something similar in my own crappy fiction. My hostility to didactic fiction probably has more to do with embarrassment about this book than I'd care to admit.
Posted by Mike Meginnis