I Almost Ended this Review of Rare Exports with a Terrible Christmas Metaphor, but Don't Worry, I Struck It

Saturday night Sarah and I went to see it: Rare Exports. This was at the kind of place where you can order a sandwich four times as expensive as the beer you've already ordered, and it will be served with strange truffled chips. (I don't even know what it means that they're truffled, except I guess that they kind of taste like flowers.) The trailers were blurry and then when the film started it was kind of blurry, which meant the subtitles were blurry. "Focus!" someone yelled. Then someone near us asked a waiter why everything was blurry. "It was shot this way," the waiter said. "Liar!" I said, and knocked my plate at him. No, I didn't.

Despite my initial disbelief that anything purporting to filter Santa mythology through the grainy lens of the horror genre would be too ridiculous to work unironically, I enjoyed the film. In fact, I felt foolish for doubting. The filmmakers dredge up a slurry of real and (as far as I can tell) invented or repurposed back story for the Santa myth, basically skewing it

Krampus-ward, and illustrate it with evocative and horrifying images from history books uncovered by the dread-heavy young protagonist.

The story unrolls in bitter night and in daylight just bright enough to gleam off the snow and ice spread everywhere. The community is tight and isolated, as communities so often are in horror, and the most memorable sets--particularly the father's butcher-ready workshop--feel claustrophobic. Atmosphere may be what I enjoy most about a successful horror film, and 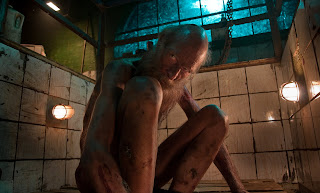 here the atmosphere is very strong when it's strong. At times it loses some of its color, however. The movie creeps pleasantly along in its first half, setting up challenges for its characters, but in its second half speeds up more than necessary, allowing those characters just enough time to navigate through the terrors facing them without stopping to reflect or worry or uncover anything new. The final fifteen or twenty minutes play at a race, and it's a shame, because in the fast and tidy cleaning up we're left wishing for the weird slow dread of the earlier part of the film.
Posted by Tim Dicks