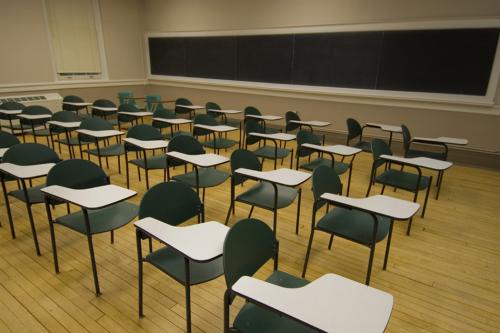 Well, the semester is over. I taught creative writing (and so did Tracy) and now I'm done, possibly forever. (How sad!)

How did it go? Pretty well, I think. My students wrote and read more for me this semester than most of them probably had in the last year. I would have liked to make the class more rigorous in certain ways, but one thing I've learned is that students will collectively determine the difficulty of a writing class; call it sabotage if you want (sometimes it does feel that way) but they have the power of unconscious collective action: if nobody does something, then I guess I've got to accept it isn't getting done. It's hard to explain how this works if you haven't seen it.

One thing I'm glad of is that I taught them Helen DeWitt's The Last Samurai. People seemed to think this was a mistake, but when I asked my students on the last day of class only two or three out of twenty agreed -- which, when we're talking about one of the most formally complex and difficult novels of the decade, is a pretty good number. I suspected that students would appreciate and learn from the challenge, even if it took a month of reading to get through the book at a reasonable pace. (For contrast: I read it in two days, mostly the second. These are the sorts of things you wish you could demand of your students.) I feel vindicated in my choice. The book is so rich -- so complex in its use of different narrative strategies -- that I don't think a person could read it without learning more than most books even have to teach. If I teach CW again someday, I will teach that book.

Abe Smith's Whim Man Mammon was less popular with students, in a way that reveals the difference between my conception of young students and how they actually approach a creative writing class. It was my suspicion (based somewhat on ignorance, given my home-school education) that most of them would have never read poetry beyond, say, Shakespeare's sonnets, some John Donne, and maybe some really tame Wordsworth or other pastoral boredom. What I thought they wanted, then, was permission to strike out in new directions and do something wild: to make something of their own.

Some students responded really well to Abe Smith's poetry, but many seemed to find it too much; too much chaos, too much weirdness, too much sound, too little clear meaning. I connected these feelings to their requests for more lectures. I lectured slightly more during the class than I had expected based on their requests, and in the end they wanted more. Many of them were looking for an authority figure, for someone to tell them what great writing was. I'm resistant to this, but their overwhelmingly positive response to my various poetry exercises, all of which were focused on unlocking new ways of approaching poems in imitation of some writer or another, shows me I think the way forward. If I teach CW again at the introductory level, poetry will be approached mainly through exercises, and we will write it whenever we read it; beginning students have the training necessary to talk about fiction in a revealing way, but not so much with poetry, it seems. They're still working out what the hell it is. Which is the main thing they said they appreciated about Whim Man Mammon: if nothing else, they agreed it showed them another approach to writing. But maybe not one they wanted to spend two weeks on.

They said my weakest selections were the plays I chose. I don't agree with them here but certainly I'm less well-versed in plays (especially one-acts, which is all we read) and I was choosing from a single anthology, an approach I generally think leads to poorer results. I'll have to try to learn more about drama. Truth is I think it's a little crazy to do three genres in one semester. But I am glad I mixed the genres up, switching between them regularly: most instructors here seem to divide the genres carefully as with sheets of butcher paper, and I don't see many advantages to that apart from the production of an illusion of mastery, which is no advantage at all.

All in all I think the only reasonable response to a semester spent teaching creative writing is overwhelming gratitude. After a couple months it became normal, something I just did, a job, and that's fine, that's what routine does. I had other classes to think about too. But one of the key features of MFA culture, one of the features that will never cease to boggle my mind, is a feeling of entitlement: it's the terminal degree, and so when you get done with it you're qualified to teach, and so you should get to teach, and it should be CW. Not everyone thinks this, but you see it. The economics of this system would of course be madness -- with MFAs spreading like fungus, we're already far closer to this situation than makes any kind of financial sense.

The MFA is a bit of a scam. It's a scam by writing teachers on universities and, if you're paying for it, students as well. That doesn't make it a bad thing. It's a nice, sometimes noble scam, designed to help writers get a little time and money to do what they love (or, in the case of some instructors, a lot of both). But it does mean that if you benefit from the scam the only appropriate response is quiet appreciation. Teaching CW is a great thing. I'm really glad I got to do it. I hope I get to do it again someday. But if not, well, I was still really lucky. Lucky to have intervened in the lives of my students. Lucky to have known them. Lucky, now, to let them go out and do what they will in their art.
Posted by Mike Meginnis