On the workings of Infinite Jest

This will maybe be really boring to a lot of our readership which has already thoroughly processed this book and moved on, but the best I can do here is to blog about what I'm reading and right now I'm reading Infinite Jest. So some thoughts about that.

One of the really unfortunate things about constructing a work of genius or whatever is that people tend to elevate it to this untouchable status where it's ineffable, like the workings of God or whatever. Fortunately Infinite Jest is such an oddly shaped monster of a novel -- maybe not as a whole necessarily (can't say yet, only 25% through) but certainly in one's moment-to-moment experience of it, that it's impossible not to on some level understand it as the product of a writing and revising and editing and further revising process that could have gone any number of ways, rather than as a sort of perfect gleaming polished pebble. But still there is a sense that you can't touch it or understand it or generate something like it yourself, when I think increasingly as I read it that Wallace is attempting a number of interventions in language -- that is to say that he is attempting to produce something that is, in many ways, highly repeatable, an experiment in the classic sense to the extent that it is one.

I have to apologize now because I'm reading this on the Kindle and the chief disadvantage of doing so is that flipping through a book, especially one as large and complicated as this, is nearly impossible -- and furthermore that the publishers of Infinite Jest have made it impossible to make any clippings at all from the text, which is infuriating. So where I ought to have a lot of quotes and examples here I'm going to be largely talking from memory and hopefully if you've read the book you'll know what I'm talking about and if not you'll be able to imagine it.

It's no deep mystery, anyway, how you would go about writing a given section of Infinite Jest. The basic strategy is DFW chooses a subject, chooses an angle of approach -- usually a style or strategy of discourse, sometimes generated by a character and sometimes by a narrator embodying that style or strategy -- and then he pursues it to something like its exhaustion. There are whole sections of the book that proceed very clearly in this way, each sentence or paragraph beginning with an identical phrase or sometimes a slight variation on that phrase. These sections tend to gain momentum in a way that implies plotting or careful orchestration when what I often suspect is happening is that the events emerge from the pleasures available from within the framework or the sentence of that style. So for instance we might have a cold discourse -- many of DFW's voices are at least superficially a bit cool -- that represents, in a key passage, a rather hot event, as when the mechanically painful and detached (because such poor writing is inherently distanced from its subject) writing of yrstruly is used to represent the death (the murder, really, with yrstruly's collusion) of a friend, and the hiding of the body. This is partly motivated by the plot but of course you could come to the same place by asking yourself "what could yrstruly's narration most painfully fail to depict" and the answer might well be "the death of his closest friend" and then that would take you down a certain path. 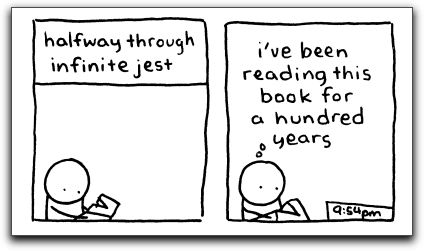 One of the other things that DFW does really well, one that sets him apart perhaps more than the basic exhaustion strategy, is the way he changes tracks without warning in a given segment of narration. So you have the sections where Don Gately is thinking about the junkies he helps and counsels and things will seem to be progressing in a fairly logical sort of "exhaust the subject and the language" fashion and then he'll switch to the fact that somebody's farted and unfortunately the junkies aren't willing to be mature adults about it and let the fart pass unremarked. Then we mess around a while and touch on all these other subjects, some on the old track and some on older tracks, and then at the end of the sequence it turns out that Don Gately is the one who farted, when we've entirely forgotten about the fart. This example (a real one from the book, mind) is useful to consider because it's a clear case of the writer probably inventing something in terms of content or plot (the fact of the fart, and then later the fact that the fart is Gately's) because it fits the movement he wanted to make in the narration, not because it fits into some sort of grand master scheme of farts. He didn't know at the outset of the chapter someone would fart, most likely, and when he wrote about the fart there's zero indication he knew it was Gately's. He discovers the facts (the farts) of the novel as they fit the sentence-to-sentence strategy he's chosen.

Or for another example there's the conversation between Hal and Orin wherein Orin, who has been estranged from the family for several years now and did not attend his father's funeral, is asking about the facts of his father's suicide and etc. The conversation has three tracks that run parallel throughout the section: a discussion account of Orin's seduction of a woman who lives in a trailer park, Hal's account of their father's death and its aftermath, and then the present action of Hal's clipping his toenails into a trash can. The conversation proceeds in fits and starts, and we can ascribe emotional import to the moments where Hal, without warning, chooses to focus on his toenails instead of (for instance) the sight of his father's corpse. Or we can take it as it is, chalk it up to verisimilitude. Orin is attempting to make Hal exhaust the subject of their father, is attempting to enforce the main discursive style of the section, though sometimes he will attempt (and fail) to redirect or interrupt Hal. When the conversation changes tracks there is the little thrill of doing the bit of math behind the decision, trying to figure it out. And there are again in this conversation places where you can see the writer writing: for instance, Hal claims to have switched feet halfway through the conversation, and then later admits to having never switched feet, and then claims to have switched feet again, in each iteration updating Orin and the reader on his progress. When reading this I suspect that DFW did not know Hal had failed to switch feet the first time until he got to a point where he needed to change tracks to the toenails but the logic of the toenails had been exhausted. He needed to invest that track with some new energy, and so he invented Hal's invention, which is a very sad little lie when you think about it -- to deceive someone about what you're doing with your feet.

What's important isn't whether or not I'm right about how the text was generated. Every writer has his or her own way of working and often what I consider completely implausible turns out to be the only answer for somebody else. The important thing is to read engaged in this sort of thought, if not in terms of the writing itself then of the world of the book itself, as a book and as a fiction. If you do want to write then you do have to think about these things, though, and if you want to be great then I suspect you have to do it with the stuff that seems untouchable. The issue not being figuring out how to be DFW -- and we could probably actually get closer to guessing this than we could to guessing how to be many more obscure writers, because while he may have been unusually brilliant he has also left behind an unusual amount of documents of his thinking and process -- but because imagining yourself writing a masterpiece is probably the first step on the road to actually writing one. 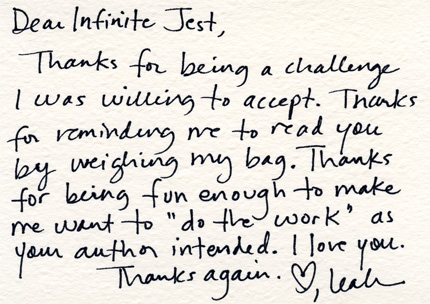 And this is sort of what I mean when I say I think DFW was attempting to do something that could be repeated. My instructor, editor and friend Evan Lavender-Smith has argued that most of what DFW did was in some way about reinvigorating a language that often feels dead; while I have said that he often operates by writing a discourse exhaustively, there is in that exhaustion also exploration of a style or strategy's possibilities, such that even if he's written everything one could write in this precise way on this precise subject by the end of a given section, there is also the possibility of imagining so much more. In reading Infinite Jest I feel a need to write, not in Wallace's style but in variations, because I see new possibilities and warmth and urgency lurking beneath seemingly banal language or situations. I think this is probably at least a big part of the goal for Wallace, and for many writers, and so I think the tendency to elevate certain works as genius is in some ways counterproductive, however good it feels to worship for a moment. The better a work is, the more it demands to be broken down and studied and explored, so that it can become a part of our language, as writers, as readers, as human beings. Isn't that what a novel is supposed to do? To give us something we can take with us, and use?

Curious what you think about this.
Posted by Mike Meginnis