The holiday has been saved: last night in an annoyingly loud coffee shop I learned that the kickass indie theater in town will show Rare Exports on the 25th. After some mockery of the film's premise, I have been humbled by strong reviews and am interested to see exactly how it holds together. Standby for my thoughts, which may or may not twinkle with holiday cheer.

I happen to have opened two good novels and one good journal recently. Here are some quick recommendations:

rie, by Marcy Dermansky: A fast story in a small stretch of pages, about a nanny, a kid, and an unfaithful husband. Dermansky's protagonist isn't all that bad, really, but she does make a series of choices that will put doom in your stomach as you read. At a few points the writing or the plotting tripped me up, but only slightly. I know a book really works if it repeatedly keeps me from turning on a video game or going to the internet, and this book did that until I'd finished it. Travel plays a major role in the narrative, and the details Dermansky puts into the locations is such that I found myself wild with hunger for croissants and thirst for coffee and Mexican beer at inappropriate hours.

Pirate Talk or Mermalade, by Terese Svoboda: I am only about halfway through it but will give it a solid recommendation. Someone opening the book might think it's full of poetry, 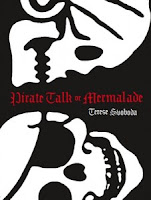 because of the way it's laid out: all dialogue, without attributions. With a few exceptions, the dialogue makes it clear who's talking and what's happening without skewing awkward, and it's a great achievement. Even without exposition Svoboda builds a seaside atmosphere that has reinvigorated an interest in pirates and whales and ships that I thought had been killed by cultural saturation a few years ago. You can read the first chapter, which convinced me to buy the book, here.

est, Issue 1: I reviewed this recently for Prick of the Spindle. Every piece in it is very short--the longest covers four pages but most play out in one or two. Most of them are good and a few make irrefutable cases for the power of very short fiction. There's enough desire and eros in these stories that it got me thinking about how well suited sex is to compact writing. Standout pieces by Kay Sexton, Grant Loveys, Tina Barry, and Juana Adcock, my favorite of which you can read here.
Posted by Tim Dicks