So I just got a tattoo.  It's a literary tattoo and my seventh tattoo.  I have two other "lit" tattoos:  the last image and line from The Savage Detectives (which was featured in The Word Made Flesh) and WORDS.  Now I have the antlers from the cover of With Deer by Aase Berg.  All three of them are on my right arm.  Lit tattoos are the plan for my right arm.  I also want to get This Living Hand written in caligraphy around my wrist, "All I am is thought without language," a line from A Plate of Chicken by Matthew Rohrer, and "Boundless love," two words from Frank O'Hara.  Those are the ones I have wanted and they were in the front of the line, before the antlers, until Black Ocean announced they would give anyone who got a tattoo from one of their books a lifetime subscription. 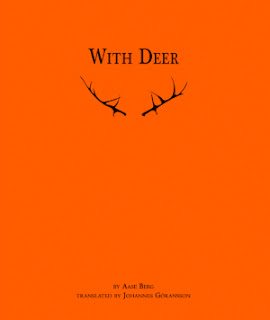 This wasn't just for free books.  I'm a fan of Black Ocean's books.  They are well designed and the poetry is amazing.  Though there are other great poetry presses out there (I work for one of the best), I can't think of a press that makes objects that look and feel as good as theirs.  The amount of thought in the design of their books is equal to the thought that goes into the poems inside the books.  Chapbook presses aside, there are only a small handful of presses that do that kind of work.
Along with the HD micro-review/blurb thing I wrote, I wrote one for With Deer.  Here it is, for your pleasure:
With Deer is a mythological grotesque that explodes diction and nature simultaneously.  Aase Berg compounds words and expands their meaning by changing their part of speech.  Most of the poems are in prose and I felt that this was a great mode for the poems, which are very narrative in style, though highly surreal.  The world that With Deer inhabits is entirely post-apocalyptic, yet entirely pre-industrial.  The darkness of With Deer feels like it’s straight from a Black Metal song or a Norse myth.  Goransson’s translation is beautiful and I feel that he was either heavily influenced by Berg, has imprinted his signature style onto With Deer, or both.  Definitely an excellent book of prose poetry.
Posted by Robert Alan Wendeborn