Spider-Man: Turn Off the Dark reviewed. 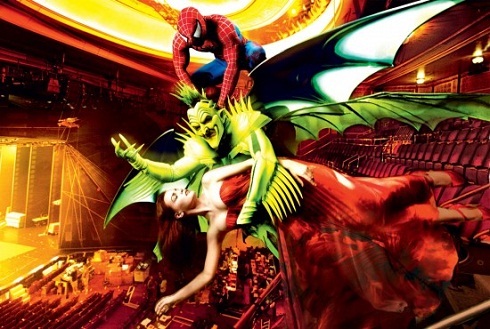 I've been fascinated with Spider-Man: Turn Off the Dark since I first read about it not long ago. The Wikipedia page is probably a good place to start for the uninitiated. Basically it's a big giant mess of a musical about Spider-Man from Julie Taymor, the lady who brought us the Broadway version of The Lion King. Also Bono and The Edge. It's unbelievably expensive (according to Wikipedia, about $65 million with running costs of $1 million a week) and it's stupidly dangerous: though actors have been flying around on wires for centuries, apparently the particularly elaborate setup Taymor's created is a bit much: they can't make it work consistently, and people keep getting hurt.
Now that the show is actually, finally out and about -- though still in "previews" so as to prevent people from being to mean about the fact it's still a goddamn mess -- the press reaction is pretty fun to watch. I like this Josh Roberts review for Comic Book Resources in particular, providing as it does the vital comic geek perspective on a play that was clearly not designed for geeks (emphasis mine):

From weak performances to laughable music numbers, nearly every single problem facing "Spider-Man: Turn off the Dark" stems from its convoluted story. Director Julie Taymor and Glen Berger wrote the book, providing audiences with a story that's as difficult to follow as it is disrespectful towards Spider-Man's established character. Deviations from Marvel lore are to be expected; this production is meant for the mainstream masses, not the Wednesday Warriors, after all, and nearly every single comic book adaptation goes through its fair share of changes. But the musical's creative departures are both arbitrary and insulting towards Peter Parker's core beliefs.
Take Swiss Miss, a new female villain created by Taymor specifically for "Turn off the Dark," as an example of the former: when the character marks her first appearance, one of the members of the geek chorus asks another: "Who is that?" The response he gets from a fellow geek, who is narrating this portion of the story? "Oh, I just made her up." That's the only explanation that Taymor can muster: she just made the villain up. There's no other reason to include Swiss Miss, as her character contributes virtually nothing towards the show's forward momentum. Beyond her admittedly stunning costume -- a vast array of spinning blades and other sharp objects -- we learn absolutely nothing else about Swiss Miss. She is, in a word, pointless. And so it goes.
But there's no character that better symbolizes the show's creative misfires than Arachne. She is both needlessand insulting. Her story is revealed through the geek chorus as well as a book report written by Peter himself: in Ancient Greece, a young woman attempted suicide after scorning the gods, but was resurrected by Athena and subsequently turned into a spider-goddess. (That's the gist of the story, at least, as Arachne's origin is completely botched by the swift-talking geek chorus who themselves represent yet another character inclusion that completely distracts from the story, an especially ironic failure considering that their sole reason for existing is to provide clarification and commentary on plot points.) Arachne is directly responsible for Peter's transformation into Spider-Man, providing him with the key radioactive spider-bite as well as his red-and-blue tights -- because, as Taymor's book rightly points out, there's just no way that a teenage boy can sew his own costume; a Greek goddess providing it for him makes much more sense.

I think the most disappointing thing about this is actually how boring it sounds. Roberts goes on to say that the costumes and acrobatics are a lot of fun, but who cares? These people looked at Spider-Man and the best they could do was say, "Wow, he's like a modern Greek hero! He's, like, this century's Hercules!"

I mean, let's be clear: Super heroes are silly. Everybody knows that. But you know what else everybody knows? Each and every thing this play seems to be trying to tell them. Which doesn't matter, really. It's just that the amount of time, money, and human suffering that's gone into this project is pretty clearly a ridiculous waste. At this point I'm fairly certain the story of the making of this thing is way better than the story of the thing itself.