Why I Hate Glee 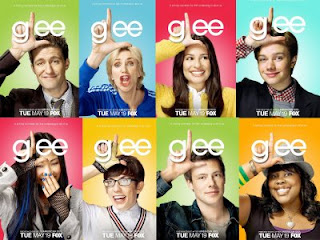 I should say that I've seen three episodes of Glee and surmised after those three that it was a bad show.  There are a lot of reasons for my hate.  I hate it because shows like Glee that have terrible writing and acting, can stay on the air, but really original and creative shows like Pushing Daisies get cancelled.  I hate Glee because it's the reason Jane Lynch left Party Down.  I hate it because the writing is bad: the story is predictable and no one says anything funny or profound.  Their lips move; that's it.

But I understand why people watch it.  There are some things to like.  It's simple and easy.  I know who I'm supposed to root for (Glee clubbers) and who to hate (Lynch's character, Will's wife, cheerleaders).  I know everything will work out in the end (even if someone dies or gets pregnant).  Life goes on and they are still happy, giving us pretty things to look at, nice things to listen to.

Here is my list of things that I saw and hate about Glee:

1.  Everyone is a stereotype
I could list a million of them, but I'll stick to the big three:  black female diva, white hetero quarterback, promiscuous cheerleaders.

2.  Bad Acting
Jane Lynch aside, the acting is terrible for tv.  These are stage actors and it's obvious.  Sure they can sing and dance, but that's not acting, that's performing.  Besides, Lynch was better in Party Down.


This is only a small clip of how good she was on Party Down.

I laughed twice, maybe three times.  Jane Lynch twice, and a little chuckle at Chris Colfer (actually my pick for a supporting actor emmy).  I laugh more at three minutes of a regular episode of 30 Rock.

4.  Over reliance on music
The show would be over if there were two episodes in a row without music.  I understand that music is part of the premise, but it's also the show's one trick pony.  Breaking Bad isn't just about cooking and dealing meth, and there are whole episodes that don't feature cooking or dealing meth.  My So Called Life isn't solely about a self-centered teenage girl, and the show doesn't stay in Angela Chase's head for every episode.

5.  It will never end
When are these people going to graduate and get jobs (do any of them have jobs)?  Are they all going to die in a terrible plane crash?  The answer is never, and no.  Glee is a money machine and it's just going to be milked as long as there's milk.  Imagine Glee:  The New Class, or Glee: The College Years.  It will die a slow and agonizing death.
Posted by Robert Alan Wendeborn