The Venture Brothers and General Treister

We've just watched the Venture Brothers season finale. This is a show produced essentially by the willpower, sweat, and tears of two men, Jackson Publick and Doc Hammer, along with a fleet of likely underpaid animators in Korea. It's stranded at impossible hours during Cartoon Network's Adult Swim programming, because that's apparently where we've decided to keep our best animated television these days. We also ordered the first three seasons, because Amazon had a deal -- and still does, it seems -- that made doing so cheaper than we could resist.

Jackson Public got his start working on The Tick, which was a comic that briefly became a small empire, which satirized super hero comics, which is a genre that already satirizes itself merely by existing, and by giving Rob Liefeld steady work. The basic joke of The Tick is that super hero comics look silly. He's a big super-strong guy in a skin-tight blue outfit with a guy in a moth-suit for a sidekick. There was a cartoon, where (my somewhat spotty research says) Jackson Publick worked under his given name of Chris McCulloch. The Tick is pretty generic as a superhero or a satire, which makes sense given that he was originally a comic book store mascot. The key to his appeal was his cheerful invulnerability, and the cartoon as a whole worked not so much because it made fun of heroes but because of the wit, wordplay, and weirdness of its world. 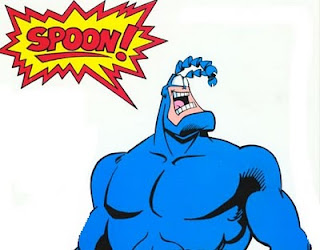 When the live-action show came around, most of the weirdness and play of the cartoon was lost in what seemed to be an ill-fated grasp at popular appeal. The other characters were flat as jokes and as people. You had Batmanuel, who was a sexy Hispanic Batman. You had American Maid, the generic offspring of Captain America and Wonder Woman. They were decent sight gags but the show was dull because there wasn't real emotional investment in their schticks: the actor who plays Batmanuel brings a bit of conviction to his character but you never really believe it, you never know why you should care.

Patrick Warburton played the Tick in the live-action series. He would, when Jackson Publick got his show The Venture Brothers, go on to play the character of mulleted super-bodyguard Brock Sampson -- a better fit, and not only because Warburton's voice is considerably more compelling than his physical presence.

The Venture Brothers is a much better The Tick than The Tick ever was. (Edlund helped McCulloch/Publick to create it.) It draws much of its DNA from cartoons like Johnny Quest and the Hardy Boys series, which helps: the show's emotional investment in childhood fantasy brings a sweetness (and a sense of shame) to the story. It also uses the vocabulary and grammars of superhero comics, action movies, Scooby Doo, prog rock and new wave music, and pretty much everything else nerds care about. One of the iconic sequences features the heroes attempting to combat evil with a plastic Captain America shield, Hulk hands, a plastic light saber, and other toys collected over the years by the villain's nerdy henchman. The show has paradoxically become, as time passes and it develops its own universe and mythos, an increasingly rich pastiche, using its audience's deep knowledge of and investment in its source material as a way of achieving emotional resonance and power the characters would likely never achieve on their own, all in the context of a super-dense, intricately plotted, at times almost incomprehensible 22 minutes of television.

Take for instance the character of General Treister. This is a guy who has appeared in three episodes. He's the head of a super-secret military organization that deals with super-powered individuals and pretenders, and he looks like this: 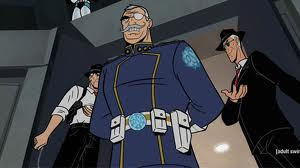 In other words he's what would happen if you bred Colonel Sanders with Marvel's Nick Fury (the original, pre-Samuel Jackson model, that is). His loud, overbearing Southern accent is compared by some to Foghorn Leghorn, but the more obvious comparison is of course Cotton Hill, with whom he shares a voice actor and most of his distinctive voice. Cotton Hill is in turn perhaps a bit reminiscent of John McCain. 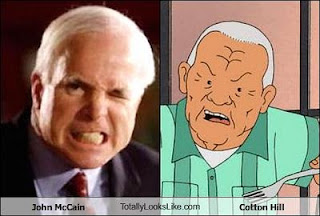 It turns out the general is in poor health. He's had eight heart attacks (shades of Dick Cheney) and depends for life on a glowing chest piece. Yes, like Iron Man. Of course his dominant archetype is actually that of the screaming southern general.

In the season finale (here come spoilers) it turns out he's maybe having further health problems. He seizes up, goes unconscious, when he comes back things are all smashed up and he's wearing a pair of tiny purple pants. Yes, like these tiny purple pants: 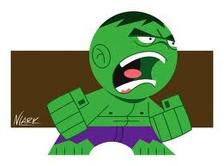 Soon enough he confesses his terrible secret. "I'm a hulk." The Nick Fury/southern general/grizzled veteran archetypes that constituted the character led us to understand him in a certain way, as a bizarre patriarch, maybe the sort of father who drinks when he ought to be building our bike. But it's okay because he works hard to earn money, to keep us safe. He may also remind us of our grandfathers -- certainly Cotton Hill does. Adding the Hulk modifier is a way of talking about the pain of having your body betray you, about the fear and alienation that we experience in watching our family's bodies grow old, change, mutate, die. The idea of a general and spymaster whose dying body is kept alive by a glowing chest piece and now finds his body transformed by rage and radiation becomes a colorful, sideways method of approaching common, bittersweet experiences. The childish props, costumes, archetypes are both a way of avoiding the issue and a way of sneaking up on it. If you're a member of a certain set of geeks, they probably make it hurt more.

The next time we see him he's naked and wrapped in a flag. This image evokes Captain America, several major films, and, well, everyone. His muscular, degrading body juxtaposed with that symbol of (decaying) empire carries the same sort of emotional payload as the idea of becoming a hulk. Now he is becoming America. He reveals the truth: he knows he's not a hulk. The truth is he's got testicular cancer. It's incurable. He plans to launch himself into space in order to either a) die or b) if you believe him, get medical treatment from an alien civilization. The final image of the episode (his saluting body ejecting from a rocket, post-it note reading FIX IT attached to his chest, gigantic gleeful prideful smile) is beautiful. It also evokes Superman -- but a Superman whose body is likely to soon decompress.

The truth is that the differences between being a hulk and having testicular cancer are not very big ones. And the way our shared cultural language (or subcultural languages) allows us to approach questions like mortality through a more primal, more terrible lens than plain language and strategies of realism. I feel more for the characters in Venture Brothers than I do for anyone in an Alice Munro story.
Posted by Mike Meginnis