Electric Literature had a really cool idea--let's all try to finish a story that Aimee Bender started. Exquisite corpse-style: each person adds a line having seen the line before. I've been watching all day, and now it's quickly approaching the 100-person end point.

I am struck by the participants' almost complete inability to make something actually happen.

She gave them a ghost/monster/apparition/thing, and they find it impossible to make the character confront the thing. If I follow it right, the thing is now evaporated and has instead glommed itself somehow to her body, presumably so that the participants don't ever have to talk about the thing she has to confront ever again--so that they can concentrate instead on what is happening with her, in her. So that all she has to deal with is what's inside herself.

And the question that started this long line of avoidance, that starts all chains of avoidance: How had her life fractured so badly that she'd ended up here?

It seems to me not a study in "too many cooks" but a study in how a particular pathology of authorial avoidance gets a story derailed. There's this urge people seem to feel to make the story not about the story but about the person and this utterly useless question of how they got to this point. A story is where its question lies, and if your question is in the past, why isn't your story there as well? 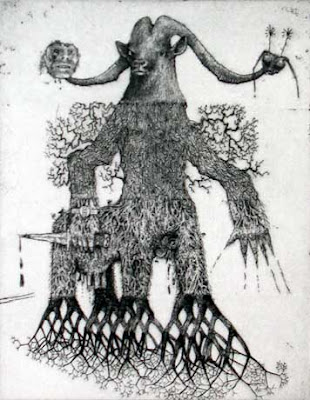 I want stories to start with people who are where they are, and who must deal with that. Certainly there's room for an exploration of how things developed, things that are essential for our understanding of the present moment. But if you've got a person up against a monster, which seems to me the easiest and most basic way to discuss any given story, then what your reader is there for is not to find out how she got to the street with the monster on it. The object of the story is to show us what happens when she has to face it, when she's avoided it as long as she can. Avoidance, I think, should be what's been happening all the way up to the beginning of the story. Avoidance stops when a story starts.

Right now the story is doing in the physical sense just what it's been doing all this time in the metaphysical sense: the character is, quite literally, running away. Pretty much the only action so far, and it ends up being a refusal to act.

So this is a call to action. I'd really love to see some people head over to the story and create some kind of action, some movement forward for the character. And if, sadly, we are too late, I think a renewed commitment to action is in order--in our writing, in our reading, in our classrooms. Action is a story's lifeblood. Without it--duh--nothing happens.
Posted by Tracy Rae Bowling