What Super Mario Bros. 3 taught me about the world 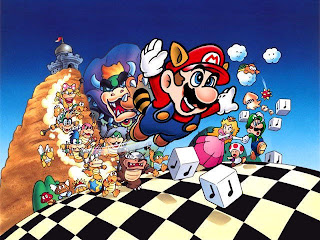 Reading Jeremy Parish's article about Super Mario Bros. 3, I remembered the period during which I started and participated in a number of video game websites. I imagine a lot of young writers today started out writing about video games, partly because games are awesome, and partly because it's pretty easy to get people to read about video games. There are maybe fifty thousand hobbyist websites and they are all in desperate need of anybody with the ability to string a few words together.

The first site I created was called a "Gamers' College." (Keep in mind, I was eleven.) The idea was that while most of the popular sites out there would give you cheats and tricks that worked in one particular game, I would give you skills that could help you to perform well and discover secrets in any game. These consisted mainly of reminders to look out for patterns: if most of the time the clouds or the platforms or the X in a given game look one way, look out for places where they look another way. I was thinking of Zelda, where you learn pretty quickly to bomb walls with cracks in them (and then, over the course of the game, to bomb and set fire to everything, just in case there's, say, one of eight essential dungeons underneath it). I was also thinking of a particular trick in Super Mario Bros. 3.

Most platforms in a certain type of level in Super Mario Bros. 3 are green, pink, or blue. They look like a natural part of their environment. There are, however, a few white platforms. Once you notice them, they stick out like a sore thumb. If you duck on one of these platforms for a few seconds, you'll fall through it, and this will allow you to run through the background of the level, safe from all the monsters. Discovering this trick makes you feel like a genius. 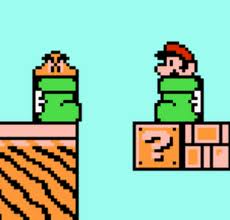 In playing Super Mario Bros. 3, we already knew that jumping in the right spot would sometimes lead to the discovery/creation of a box containing a coin or a power-up. We had learned this when we jumped into mid-air at the left edge of the green hill before the pit after the fourth pipe in the original Super Mario Bros. We had a sense for where these invisible boxes might hide. Something about the angles of a level. Something about the likely path of Mario's flight. We could feel it.

My Gamers' College would also point out that in a platforming sequence where timed hazards rotated or fell into place and then receded it was usually necessary to rush toward the hazard when it appeared to be most dangerous. It would also point out the necessity of planning and preserving one's resources. In other words, my goal was to codify the wisdom video games inherently teach. The necessity of saving small sums of money until they became larger sums to purchase video games taught me how to manage finances, and so did the necessity of saving the power-ups in Mario 3 until the appropriate moment.

Mario 3 also taught me how to explore:


Super Mario Bros. 3 begins by giving Mario familiar touchstones—bricks, a Goomba, a mushroom, a Piranha Plant—before throwing new things into the scenario. The Piranha Plant spits a fireball. There’s a Question Block on the ground, forcing Mario to kick a turtle into it... and out of that block comes a new power-up icon, a leaf. The leaf confers upon Mario a tail, which can be used to smack enemies from the side. And no sooner do you get a feel for the the raccoon tail than you realize that there’s a trail of coins leading into the sky. You take a running jump to see how many you can grab, and suddenly you’re flying. And all at once you realize just how very new this Mario game is going to be.

Here, too, does Mario 3 demonstrate a fundamental component of modern Nintendo design: The canonization of the unique. Nintendo has always been distinct from other developers in its tendency to take a simple core mechanic and explore countless different permutations of that idea: outward-looking game design. Other developers tend to grab a scattershot array of ideas and force them into a cohesive whole, working from the outside in. Such games usually feature a handful of brilliantly original ideas used to the point that they become utterly rote.

Mario 3 took a different tack, tossing out countless improvisations on its core mechanics, but presenting each one sparingly, so that its embellishments became memorable rarities. Kuribo’s Shoe -- a massive wind-up boot piloted by a Goomba and wholly capable of being hijacked by Mario -- remains a fan-favorite feature. It appears twice in a single level of Mario 3, and its popularity is no doubt a function of its scarcity.

In Super Mario Bros. 3, the physics are fairly simple: you're a guy who can run and jump. If you land on top of something it dies. If it touches you in any other way, you die. If you hit a block something good will come out. There are power-ups and variations on the ideas in the game that change how you manage these rules, but these are the rules.

If it looks like you can do something in Mario 3, you probably can. When you first see Kuribo's shoe, you notice there's a goomba riding in it. You know that you can kill the goomba. If you kill the goomba, it might leave the shoe behind. There's no reason that you couldn't ride in the shoe. 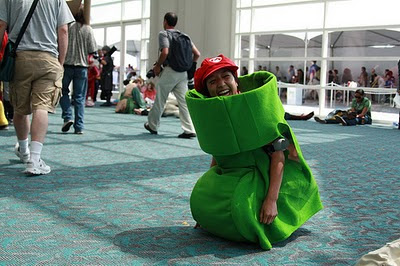 What Mario 3 taught a generation of kids was to be observant, to imagine new uses for old tools. It taught us to explore. It taught us to see the world in terms of a series of creative opportunities. There are many video games that are probably not very good for your children. The ones your kids need to play have outward-facing game design. They are little Gamers' Colleges.
Posted by Mike Meginnis