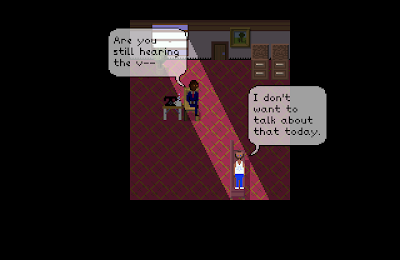 Remember Sleep is Death? I've been disappointed with most of the games I've seen on sidtube but this one is pretty good. Taken as a straight narrative, it's not that great -- you've got a therapist and a patient, you've got a pretty vague mystery, the hapless patient hears a voice, the voice is very strange and aggressive. You wouldn't want to read this as a short story or watch it as a film. But taken as what it actually is, a collaborative storytelling game between two people, I like it a lot. What isn't immediately obvious if you're not pretty familiar with the game is that the player is responsible for the voice in James' head, not James' dialog. This is the game's greatest strength, and its weakness -- if you think about it, the premise of being a voice in someone's head is most exciting if you can make them do things, especially things they don't want to do, or things they maybe secretly do want to do. There are gestures in that direction here, but they all happen in dialog, and James' dialog is rather flat, hitting the same two or three notes regardless of the player's inputs. The best bits are where the voice/player gets to speak *for* James. The worst bits are the long stretches where he's trying to make something happen but just can't do it. Sleep is Death is essentially a simple work-around for the problem of how to make games deal with language, but the controller really has to understand that concept to get the most out of that workaround, and there are good instincts here but they're not totally followed through on. Still, you can see that even in the slow patches the player and the controller are having a lot of fun.

Note also the careful visual composition, which pays close attention to negative space and relates the characters in an inherently dramatic way. Note the use of small gestures where most SID games rely on big movements. There's a lot to like about this, even if it's not 100% successful in my eyes.
Posted by Mike Meginnis