I really like ballet--dance in general--but I often get impatient with it in its staged form, especially when it's littered with extraneous Spanish dances and Arabian dances and so on--suites composed to satisfy some patron, some prima ballerina. And Swan Lake makes no improvements there. (Don't believe me? Watch Act I.) There's also the physical demands of ballet and their implications; women break their bodies to do this. That's not great, as an idea.

But this dancing is still an art, and so is the music that accompanies it, and so, very much, is the act of choreography.

Swan Lake's choreography was changed several years after the ballet was written, and it was this choreography that made the ballet so popular. It's immensely challenging, so much so that to change it in any serious way tends to draw disfavor--upon both the show's directors and the ballerina playing Odette/Odile (it's a dual role). Why is it she can't do what more than a century of other ballerinas have managed to do? What is she hoping to hide?

Yet, it's not the technical challenge that tends to impress people about Swan Lake anymore. The choreography in Swan Lake is deeply rooted in pantomime. The famous pantomime scene is when Siegfried first meets Odette by the lake. The whole thing is pantomime really--she is miming to you that she's a swan, that she's nervous; he that he won't hunt her, that he wants to look at her. The conversation really begins at 1:35: "Who are you?" Siegfried asks. Odette replies, "I am the queen of the swans." Though it's as graceful as any technical ballet movement, it is pantomime that lays out the story and that makes the emotional movements of Swan Lake apparent.

Despite the pull to adhere to tradition, directors obviously don't always want to perform Swan Lake in quite the same way. Neither do ballerinas. Usually, the aim for both has been to reproduce in Odette the nature of the swan itself, which has traditionally manifested itself in movements that are impeccably graceful, both stately and fragile. Thus each new production's interpretation of Odette has often been evaluated through the degree to which the ballerina's arm movements are seamless, on her ability to convincingly preen and flap, on the tremble in the legs. One Odette, Agnes Letestu, saw swans differently and based her conception of the character on that: "Swans are splendid creatures. They are not frail, fluttering things, and neither am I! They move a lot of air, and splash down heavily when they land; I've watched them and my interpretation has become more physical and animal." If you watch below, you can indeed see something a little more decisive and bold about her movements; no grace is sacrificed, but something does seem more animal, more emotionally blank--this is the swan pure and simple, not the swan-girl with her tragic love.

The interpretation also changes with the production's conception of Siegfried. Productions have alternately treated Siegfried as a typical Prince Charming, self-determined and in control of his reality; as a dreamer, an idealistic Candide moving from dream to reality; and sometimes as a Hamlet, who wants to change his reality but has trouble deciding how. When the prince changes, the queen of the swans changes; she becomes object of his desire, object of his dream, or subject of the story, with him as recipient and her as actor. To make the story make sense, the ballerina and premier danseur must be well matched--because her task is so physically difficult, and so emotionally important to the story, her dance must mime swanhood, in a way that shows her role in relationship to the role he's been playing. With Letestu, her desire to effect change in the swan queen's character was complemented by a change in her partner's conception of Prince Siegfried's relationship to the swan: "With Ghislaine [the premier danseur], I no longer see myself as a victim about to be sacrificed. What became important was to show the woman imprisoned under the swan's great wings." These conceptions of character enter the dancing, changing the emotional trajectory of the story, even as the technical movements and pantomimed gestures stay largely the same from production to production.

But there is one gesture that strikes me every time I see it. It appears in every production that's not pretty radically rewritten. This one gesture, in its particular executions and arrangements, makes manifest the emotional arc of each separate production. 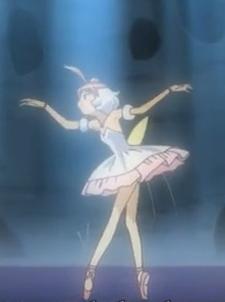 This image may not mean much to you out of context. It probably wouldn't have for me, either, if I hadn't seen Princess Tutu in its entirety, and learned what this moment means. In this moment, Princess Tutu (yes, both) is being challenged to announce her love to the prince (Mytho) so that his heart, cast out of him long ago and split into pieces, will return to him. The problem is, as soon as she speaks of her love aloud, she will return to being--not a swan--but a duck. (A pitiful duck who can do nothing--they reiterate the point a lot in the Japanese. The duck is for some reason an inherently impotent animal, it seems, and you feel the force of this understanding as you watch. Her odds are impossible.) This moment shows Tutu attempting to announce her love through dance. The moment is important because she is dancing by herself a pas de deux, a dance requiring two. That she doesn't have her second is in itself a mime, communicating that she's missing him, that she needs him as her second. (The whole scene is here.)

This gesture comes directly from the traditional choreography of Swan Lake, and it is never performed the same in any two productions. It is altered by the particular posture of the ballerina, and it is altered by the physical positioning of prince and swan. In Tutu's case, the prince is absent but her movements suggest him; in a climactic moment, she leaps into the air and suspends herself in a lift--from which she ultimately falls, as she lacks the support of a partner. In this subtler movement pictured, she also expresses her need for him: the bend of the head, the extension of the arm. Where in the story of Swan Lake this movement functions as a sort of farewell, signifying Odette being pulled away from the prince and back to her swan form, Tutu's posture is not that of a wave goodbye. Her hand is reaching to touch something--a shoulder or cheek that's not there. Her particular posture communicates this sense of longing where other ballerinas choose to emphasize the swan's fear, the swan's grace, the swan's desperation, or her captivity to magic. 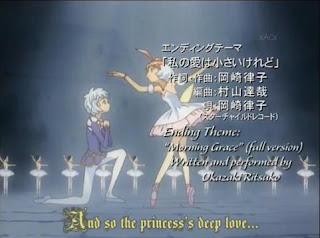 In the ending of the episode, therefore, it's not surprising that Mytho is close by when dancing this part with her. Her hand never quite comes to rest on him, but it's clear that that is what she wants to do, and that what she wants to communicate to him is her "deep love," her benevolence. That Princess Tutu is not fated to be with Mytho (despite all appearances in this episode) is foreshadowed by her gesture--she can love him, but it's a love separated by a veil; they will not actually touch.

Zakharova and her prince do touch. Watching the full scene, her hands crawl all over him as if trying to remember his face--her priority here is to the love story, to communicate that the swan queen doesn't want to leave and that she has fallen in love as much as the prince has. The prince, meanwhile, kneels in supplication; he can hardly let her go. The desire expressed between them in this instant of choreography is mutual.

Lopatkina has moved a small distance away from her prince; she circles him, ebbing further and further away. In the full scene it becomes clear that her obligation is not to him but to her spell. Siegfried likewise has abandoned the kneel--he's not begging, he's beckoning. There's nothing of her to hold onto. She is more dream than real.

Letestu moves quickly and almost frantically away from her prince. Her arms are liquid in the full scene--she does not give the same pause for the farewell gesture that most others do. She seems to merely be taking her leave like a nervous Cinderella: "Goodbye, goodbye, I have to go!" The narrative is matched in Siegfried; his arms are extended after her not in pledge, as with Tutu's prince, but in fervor: "Wait!"

Murphy bows more deeply than any of the others, and in the full scene the pantomime is exaggerated to show her resistance against the magic that compels her. Though she is far from her prince, this is her last, desperate gesture to him as a queen and not a swan--very shortly after she reverts to a mechanical object of enchantment. Though he fights against her transformation as well, this part of the story is hers; her emotional arc as the captive supersedes the emotional arc of their love.

It's just kind of amazing to me that a single gesture can be interpreted so broadly, and that some versions can emphasize it so heavily while others use it just as another wave of the swan's wing. It's amazing to me, too, that pantomime can communicate so much, especially when it's typically thought of as second-class artistry--a too-literal translation of what we like to think of as very nuanced shades of emotion. Maybe we, and our characters, are not all that complicated after all, at least in terms of our gestures. It would make sense to me to say that we all make the same gestures, that we all work from the same palette of preconceived actions, but that we perform them differently, in different posture, according to our priorities.
Posted by Tracy Rae Bowling