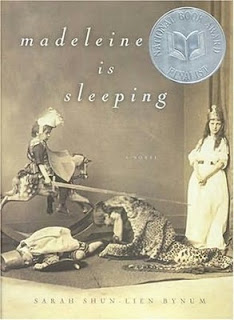 Probably the only exciting thing about the New Yorker's 20 under 40 list was Sarah Shun-Lien Bynum's inclusion. One can't help suspecting they were attracted to her largely for her more conventional work (the excellent but thoroughly mainstream-friendly Ms. Hempel Chronicles) but then I like that stuff too, so all's well.

We might also talk, with some frustration, about the use of our literary leadership of the "fairy tale" category to sanitize the strange things they like. Magical realism, fairy tale, fable, have all become styles in the Gucci sense; these are not, as constituted by our community, so much genres as a register. A little sweet, a little sour, full with empty menace, sentimentality masquerading as beauty, easy insights dressed up as wolves and little talking animals. I guess I'm saying I'm tired of these things. I am tired of the attempts to cordon everything strange and beautiful and exciting in a cutesy ghetto of toothless categories that cheerfully adjunct themselves to the self-consciously literary dreck that is supposed to be our primary fiction. I am tired of restraint -- or rather, I am tired of restraint that is masochistic rather than erotic, restraint that punishes writer and reader alike for their passions and hungers rather than indulging them in careful, quiet ways.

Part of what attracts me to Madeleine is Sleeping is the way in which it reveals the language we use to talk about story as largely meaningless. The story has been called a fairy tale. It has, I'm sure, been called magical realism. And while it may use some conventions of fairy tales, and elements of such, but to focus on this element is to obscure the whole: what people are really saying when they call this a fairy tale is that they don't understand its logic and they can't be bothered to try. Insofar as magical realism is concerned, give me a break -- there's nothing real here. The book is about a girl who, while sleeping, dreams of herself stroking off the village idiot, and, having told her parents what she's done, is punished gruesomely. This also really happens. She dreams of a very fat woman named Matilde, who one day grows wings, and thereafter studies her own droppings for signs of what is to come. (She is a woman of science.) This also really happens. What are the rules of her dreaming? Does she have two bodies out and about in the world? The answers are, as I understand them, that the rules are not for us to know, and that yes, she may sometimes have two bodies.


The imagery of the book has been called "poetic." This may refer to its combination of slippery world details and precise images -- the haze applied to our understanding of the world as a whole, the sharpness of our visions of Madeleine, of her friends. But why do we call prose poetic? Generally because we can't think of anything more accurate. This is also why we talk about musical language: laziness. I remember listening to Everclear's World of Noise while I wrote my first book so I could write better, more musical sentences; that was stupid. I should have been writing more proseful prose. And this is proseful prose -- often beautiful, yes, but who was it exactly, which Very Special Person, that agreed prose could not be beautiful in itself? That we would need poetry to get along? I'm not even sure that poetry should be "poetic" -- the term seems, like magical realism and fairy tales and so on, a kind of ghetto: we all know that unnatural grammar is "poetic," we all know that "Ode on a Grecian Urn" is "poetic," but what we rarely acknowledge is that we also hate to read it. (Insert here a short, argumentative essay about how only deluded people, the smugly religious, and the stupidly rich can really value delaying gratification beyond death itself; the rest of us would like to eat a damn strawberry.)

Bynum also makes a hash out of ideas of tone. Can anyone tell me what the tone of this book is? Can you tell me the tone of even a section? There is the sparkle of typical magical realism, but little of the blind sentiment. There is a lot of eroticism (a hint even of the pornographic). There is beauty not presented as if it were beauty. The novel's success depends on your willingness to accept a character called "the flatulent man" as an object of love, of lust, of need, of ache and tender wishes. Characters sometimes sing for reasons unclear. I'm reminded of Brian Conn's The Fixed Stars, wherein many tones exist side-by-side in a prose that is at times heavily inflected (and at times pointedly blank) but unwilling to commit to any one voice or way of reading.

Formally, Madeleine is Sleeping reads somewhat like a novel and is usually called one, but it might also be construed as a collection of very short fictions -- most about a page long, many shorter, some bleeding onto the next page, each with their own titles. The relationships between adjacent pieces are unstable. At times they follow each other immediately in time. At times they share time but not space. At times they comment on each other directly. At times they seem entirely unaware of each other. The cumulative effect is that of a novel, but it puts me in mind of Vonnegut -- a work divided into sharp, clear, lovely pieces though not necessarily scenes or incidents. A way of negotiating complex interactions of plot, character, voice. There were times I would have liked to read the text straight through, without so many breaks and breaths, but of course breathing is part of a text. Whitespace is proseful prose too.

This is not all to wave my arms and shout, "Who knows how it works, but it does!" Certainly there is some mystery about the underlying mechanisms of the book. As it draws to its close, what seemed at times a very slack structure draws taut with rather shocking speed, as a fishing net tightens and strains in raising its catch from the water. (The reader is, of course, the catch, but he or she is also the net.) It works by refracting desire and character and narrative through one tool set among many. It works by what is at its heart a fundamental narrative structure. It works by prioritizing need over reality. Its organizing logic is want. Its rules are lust, hunger, loneliness. These, and not the sometimes-useful tenets of domestic realism, are the building-blocks of fiction. And God forgive the puritans who tried to learn us otherwise.

Madeleine is Sleeping is not a fairy tale, is not magical-real. It is a book. You can hold it. It is a story. You can read it.
Posted by Mike Meginnis