The second-best part of Heavy Rain is the first scene. You're a guy. You wake up in your underwear. The game tells you how to get out of bed. The camera angle indicates that you might want to go outside on your balcony and look at your back yard, and it's a nice day, and you're feeling pretty good, so why not? You walk outside. You lean on the rail if you want. You breathe. There's some nice music. It's quiet. Eventually you remember your day is about to start, and so you go shower. 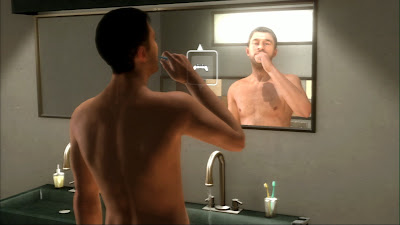 You groom yourself. If you want to pee you can do that. In fact your characters can always pee on command, any time you see a toilet. I always made mine go. They looked like they could use it.
This section is a tutorial in how the game works, but it's mainly about being this guy. You can listen to his thoughts for clues about different ways to pass the time if you want, but don't do that. Instead just walk around the house.
You're a husband and a father. You can play with your sons' toys. You can work in the garden. You can walk around in the yard, breathing. You can do some work. You can watch television. Eventually your wife comes home and if you're watching TV instead of doing something productive you'll feel like a lout. Help her with the groceries. Set the table. You can walk around while you talk with her. You can take a drink. You can watch more TV, if you want to be a shit all your life.

This scene is beautiful. The only problem is you're never quite sure what you're supposed to need and want in this scene. Yes, you're anxious to be a good husband and a good father, but every indication says you've already succeeded.
Often you don't know what your character was thinking or feeling just before the scene began -- you can listen to his or her thoughts to figure out what your next move is, but how did you end up here in the first place? What's happening, and why? It's inscrutable. 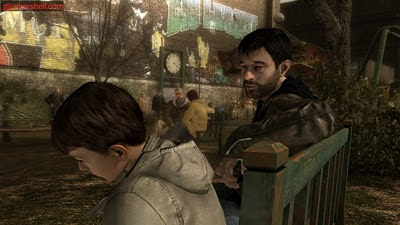 Sometimes this ignorance, and the veil that hangs between you and the game's underlying mechanics (you play any given scene only once on your first time through, which obscures how all the moving parts relate) interact with the game's promise of meaningful decisions for an interesting emotional effect. When (SPOILER ALERT!) you see one of your sons die, and it happens to be the one you chose to play with second, it's natural to wonder if this is somehow your fault. This is a moment of your game experience matching the character's life experience -- he was, in that scene, wondering if it was his fault too. The same thing will happen if the dead boy is the one you played with first. The terrible possibility you somehow marked him for death is too real.
When you're searching your pockets for money to pay for a balloon while your son disappears into a crowd, a disappearance that you're sure will kill him, and you manage to check every pocket but the one with the cash first, you can either rage at how unfair this is -- you never saw him put the money there in the first place! -- or you can look at this moment as a very true rendering of a universal experience. This is a game that should announce, in bold type, on the back of its box, that it can make you feel exactly like you've lost your keys. In no other game will you have that experience, but it seems like maybe you should. 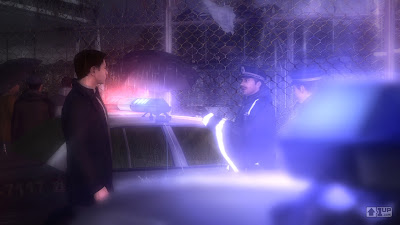 The fights, endless quick-time events where you desperately hurl lamps and bicycle parts and so on at each other frantically, are awful in the way that all QTEs are, but they sort of work: the feeling of struggling with the controller, frantically attempting to press the button that's just appeared on the screen, is analogous to noticing the lamp and then flailing for it. At their best, the QTEs feel like what the characters must be feeling -- assuming they feel at least a little extremely annoyed. At their worst, you remember that they're still QTEs.
Probably the most exciting gameplay moment is when you realize you can lean against the wall, lean on the footboard, or sit down on the bed next to the prostitute your private detective character Scott Shelby is interrogating. Leaning against the wall suggests you don't give a shit. Leaning on the footboard is intimidating and at the same time intimate. Sitting down with her on the bed seems like offering up empathy. The dialogue doesn't really change when you do this, but it certainly feels very different depending on where you're standing or sitting. Start out leaning against the wall and then lean over the footboard when shit gets real. The way you maneuver your character within the space of the game is essential. You'll move through dingy apartments, hotel rooms, real live homes, torture dungeons, cars, and tunnels filled with glass. Most of the time it doesn't affect much of anything where or how you move, and this makes the choice more meaningful, just as the knowledge that the story will continue whether or not your character lives changes things for the better. You aren't playing to beat a level, you are living in a moment. 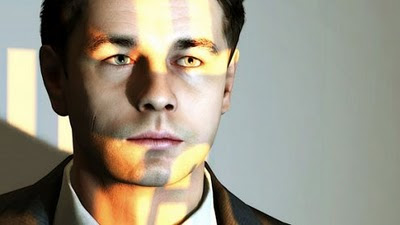 The best scene in Heavy Rain hands-down, and possibly the single greatest scene in any “story-driven” video game in the last ten years, happens when your character takes care of his son for the night. The son wants to watch television. He has a schedule for the night, which he hates. He doesn't seem to love his father very much anymore. He's cold, distant. Your job that night is to be a good father and to try to win his love. The fact that it doesn't change the ending you'll get or help you unlock magic armor makes the scene work. The constant grinding stress of trying to please your son is harrowing enough on its own.
The plot in Heavy Rain -- the thing that joins the scenes together -- is basically shit. The gameplay, apart from a few moments, isn't much better. The individual scenes, however, are often brilliant. There's a character who spends a lot of his time at a small, filthy desk, working in a virtual environment. You can decide if you want this environment to be a forest, for instance, or maybe the vast vivid desolation of the red planet Mars. This would feel like changing our desktop wallpaper if it weren't so gorgeous. A man, in a suit, at a desk, alone on Mars, surrounded by clouds of red dust and worn down by the sun. I want to be that man, even if I have to spend a little too much time climbing a muddy slope and scrabbling back down.
Posted by Mike Meginnis