I originally wrote this for Action Button Dot Net, but I suspect they're too busy developing their video game (which will probably be super awesome) to read unsolicited submissions right now. A couple more will be coming.

You begin Fallout 3 with your mother's still-hot blood on your face. Your father looks down on you with loving eyes, a medical mask, and a lot of bright lights situated behind him. He has Liam Neeson's voice. Liam Neeson's voice asks you a series of questions that define you as a person. Your gender, your appearance, and your name – which no one will ever say – are here selected. This also has the effect of defining your father, whose appearance is partly determined by yours. The question is more or less how ugly you'd like to be, or more accurately which kinds of ugly you find most appalling. Most players probably prioritize avoiding what they hate most about their own appearances. Because I think my chin too soft, I always give my avatar a strong one. 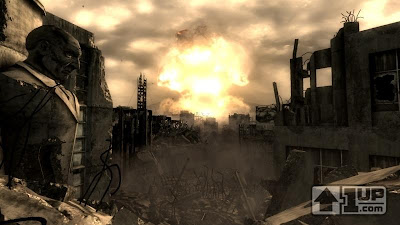 In the next scene, you use a baby book to choose your statistics, and maybe, if you want, you kick around this really beautiful red ball. I always work on this for as long as I can – kicking it into corners, kicking it back out, and so on. The beautiful red ball doesn't matter at all, which makes it the most important and lovely thing in the entire game. If you press the talk button, your character makes a baby sound. I like to time this so that it seems I'm responding to the events on the screen – I goo when my father talks to me, I gaw-gaw when I kick the ball, and so on. This doesn't matter either.

In the next scene you have a birthday party. Here you can have a fight with a bully or submit to the bully. You can be polite to people or you can be a snot-nosed little ingrate. Someone will give you a party hat. You can equip the party hat. It's not important, which makes it extremely important. Usually I wear the hat. This scene is almost as good as the scene about being a baby.

In the next scene your character is grown up. You have to take an aptitude test that will determine your character's starting skills. Here the trouble begins. Because you can very easily guess what skills will be raised by which answer, you are no longer being a person in a space, you are rolling up a character. In the end the character conducting the test will give you a chance to tweak the resulting numbers directly. These things suck because they matter. Players will emphasize explosives or gunplay or melee combat, they will be drawn into the abstractions of statistics and gameplay mechanics, whereas before they were a being an entity in a context.

When your father escapes the vault in which you live, you have no choice but to follow, killing or not killing some number of people on your way. 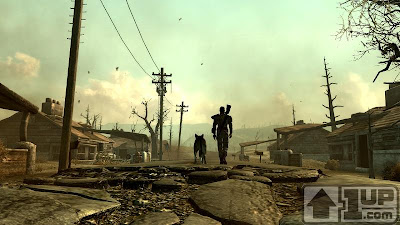 The only real choices in Fallout 3 are between killing everyone and everything you see and only killing most of the things and people. This is also the only choice available in most games without ostensibly meaningful choices – not shooting every single person in Megaton City, or even killing them without first speaking to them and learning why you hate them, amounts to a speed run.

There are three separate games within Fallout 3: Bad Shooting, Dialogue Trees, and Atmosphere. You know about the first two. They're entertaining, you'll play them for dozens of hours, but they're not very interesting.

Atmosphere is the really good one. This is the one that lets you get back to being a person in a space. Especially in the early game, you spend most of your time wandering around in the wastelands of DC, rifling through trash cans and broken soda machines for spare cash, spare ammo, scrap metal. There are about a hundred thousand random objects in the game, from surgical tubing to toy cars to frying pans to pilot lights, and they just sort of show up on the shelves and the floor and the dirty mattresses of the wastes. If you're really diligent about picking up all the garbage in sight and selling it to the vendors that wander through the game, you eventually get together enough money to buy yourself a slightly less broken gun and a few bullets. This lets you kill more efficiently, which lets you buy better guns, which helps you get more money. 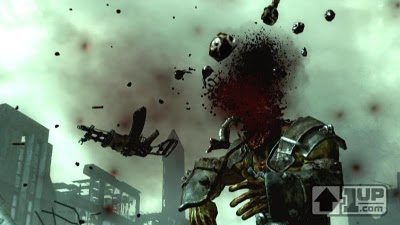 At some point you realize you're just another jerk in another RPG filling up bars, but there are several really sublime hours where you're being a homeless person in a desolate place. A similar game – maybe the perfect Fallout 3 – would take place in the slums of current-day DC, or maybe Baltimore, and your main character would be a homeless person picking cans up off the street to sell them for nickels. He would push a shopping cart around and people would refuse to look at him – to look at you. Fallout 3's greatest failing is that you don't have to carry your equipment in a shopping cart. Fallout 3 as it exists has a bunch of none-too-subtle moments that add up to a political argument about the importance of institutions and community. This other game would be about the way those things fail us when we need them most.

Sometimes, if you squint, while you're playing Fallout 3, or rather Atmosphere, you can see yourself playing that other game, which would be a lot better.

You can actually roleplay this a little by stretching out this moment of desperation, working to maintain the illusion you're genuinely living in the post-apocalypse. One way to do this is to steal everything you can get your hands on, and to kill anyone who catches you, and then to strip the bodies. Another way is to murder traders execution-style and take everything they've got. Another way is to get the perk that lets you eat corpses, and then to live exclusively on the dismembered bodies you find. You should always be listening to the old-timey music on the radio.

The logic of filling bars is too strong in Fallout 3. At some point you'll follow your father into the story proper, which always feels like giving up. Here the XP comes faster, the items are more valuable, and the bars will take care of themselves. By the end of the game you're running around with 23,000 caps, an unbelievable stock of ammo, fifty weapons, and super-armor. It's almost impossible not to excel. In short, it becomes too much of a “game” and not enough of a game; you can't just be a person in a space, you have to pursue a goal by tweaking numbers that correspond to abilities that don't necessarily feel at home in the wasteland. Instead of gnawing on a rotting apple you're buffing your mini-nuke launcher.

The mini-nuke launcher is funny, it's true – but the DC wasteland, at its best, is devastating.