What happened to the props. 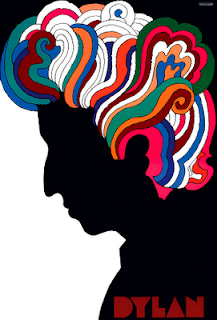 On the first night of the play we cracked the plastic cup that held the pens and markers. Some of the pens and markers fell behind the platform center-stage. Some of the pens and markers rolled behind the curtain. Most of these were recovered. Some were probably not.
Every night the lead in the first play used a hardback book as a hammer. Every night she tore the fake paper slipcover with her teeth. The book bent and warped.
A print of Milton Glaser's iconic Bob Dylan profile was scuffed on its edges and corners as it was moved, moved again, leaned against the wall here, leaned against the wall there, propped up on a pillow, moved again. Another, less Google-ready print is raised to eye level, hung, lowered, raised to eye level, hung, but never sees real damage. An intentionally ugly, amateurish painting is kicked and stomped savagely at the climax.
The toilet paper roll, practically the only prop in the second play, is tossed back and forth. Dunbar's tattoos begin vivid and they will end vivid, though they are false tattoos. The blood on his abdomen, hands, mouth, and pants spreads with every performance, however, as if the character is slowly dying while we watch -- as if, were we to perform it enough times, his corpse would play the part, laying still on his back while the other characters behave as if nothing's changed.
The lighting cues jump slightly forward and back. The audio changes its volume. 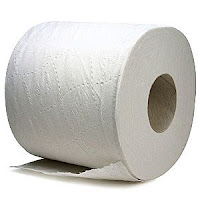 In the third play, Tracy's, a jewelry box's joint snaps and is repaired. A drawer was already broken. The letter of acceptance is treated roughly but does not break. The table's leg is strained, and so is the leg of the fancy chair. They do not break, however, even when -- every night -- the daughter pushes her father into the chair.
In the fourth play, mine, the pens lose their caps. The markers dry out. The interviewer's stack of papers thins with every performance. The rubber band ball loosens, becomes ragged. Crumpled paper accrues in the plastic tub. The black and white photo is replaced with a color version.
In the first play, the curly blue ribbon on the hammer becomes stringy, limp, begins to lose its curl. The newspaper that backs the canvas grows ragged, begins to hang loose from the frame. The fake Kenny Werner album's cover skews.
In the second play, the toilet paper roll becomes more ragged. It's spotted with Dunbar's false blood. The right side of the platform begins to detach at the foremost corner, apparently from the stress of Dunbar's jumping down from the bench.
In the third play, the feathery boas shed here and there. The bright lipstick is diminished by the mother's use. The acceptance letter splits neatly in two unequal parts.
In the fourth play, the box used as a desk begins to warp at one corner from the stress of being overturned each night. The gun is always loud. The lead pours a can of soda water on himself every night, but his shirt and coat are always dry the next night, and so is the carpet. Some things persist.
In the first play, a new bag of baby carrots. Fresh bagels. The false liquor bottle is emptied and refilled. The hammer's ribbon is limp. The painting detaches from its frame. 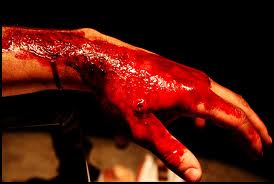 In the second play the toilet paper's coming loose. It has a tail. It's bloody. It's falling apart. When they throw the toilet paper it has a tail. Some falls out onto the stage. This is bloody also. I remove it between plays. The characters do not acknowledged what has changed, how their world is degrading, because they cannot. They always say the same things -- or close enough.
In the third play, the feathered boas look tired. The bright lipstick is stumpy. The acceptance letter's been replaced.
In the fourth play, he is nearly out of paper. There is just enough to throw. The plants have gone flat. We dismantle the platform, and find the missing pens.
Posted by Mike Meginnis