I used to want to be a sculptor more than like anything. Other stuff I wanted to be more than anything: A puppeteer (involves sculpture), a claymation guy (involves sculpture), a painter, a comic book artist, an actor, a voice actor, a scientist (very briefly), and probably a whole lot more. I've always been more enamored by what I imagine I could make in a given medium than the results of my brief dalliances, except where fiction is concerned: the process is absorbing enough, and I seem to have enough of a natural knack, that the product generally resembles what I wanted closely enough to keep me going.
There are simple and obvious explanations for my belief as a child that I was a good writer, for my belief as a teenager that I was a good writer, for my belief as a college student that I was a good writer, and possibly (he said, self-deprecatingly) for my belief now that I am a good writer: that is to say that as long as you can write a halfway coherent sentence, your bad prose will look stunningly similar to good prose. It's all just words on a page, and if you were dumb enough to write it then you're probably dumb enough to think it's worth reading (it was apparently involving enough to keep you going until you finished). For other types of artists, humiliation is easy and fast: whenever I draw, I can immediately see how crappy it is in comparison to the art I admire. It just doesn't look the same. As for my sculptures, they always fell apart. What it says about me that I stuck with the art form where self-delusion is easiest is something I don't like to dwell on. It may be a kind of laziness, a cowardice, or both. It's a good thing I love books.
I wanted to make, now that I think of it, my own chess variant. (I thought I was good at chess, perhaps for reasons similar to those that made me think I could write: chess dudes moving around on a board badly looks pretty much the same as good chess if you don't know enough to know better.) I wanted to make little guys for the chess variant. I bought cheap dough. It was supposed to make statuettes, as I understood the situation. It didn't. Or rather, I didn't. I am not a sculptor.
The person who made these -- selectbutton.com user Ionustron -- is clearly a sculptor. These statues are made of twisty ties. You know, the kind you tie a bread bag off with. 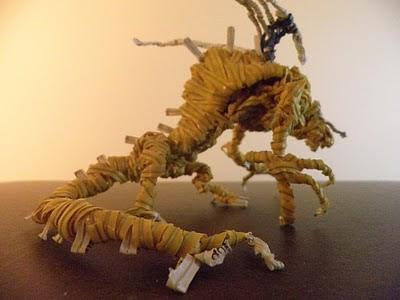 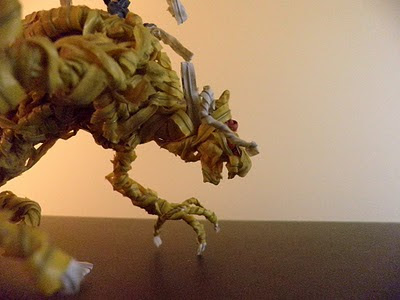 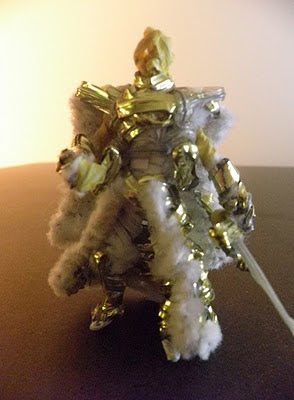 There are more of these here.
Posted by Mike Meginnis