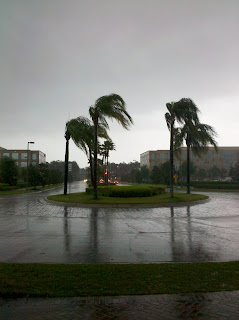 This morning I dreamt I signed onto this blog and typed up a terrible and awkwardly confessional post, and then that I went back to bed and woke again and typed a longer, an epically longer, ramble. Then I woke for real (our apartment was battered by a rainstorm through the night and I woke several times to the rattle of windows or the cat's movement as she lost her mind) and thought, Did that happen? Did I really just brainvomit into the internet? I was relieved to learn I had not.
(Then later I dreamt that my Sarah, my fiancee, had secretly written everything I'd ever thought I'd written. Turns out she had a system going where she'd get on my computer when I wasn't around and type a story in an invisible font and then every time I sat down to type I was just unconsciously reading and retyping the words she'd already put in! In my dream I was pretty impressed and also freaked out. I was like, You're so clever!...but weird.)
It's unusual to dream of writing because usually if anything I think about the reverse, of writing about dreaming, in the sense that after I wake up I might ask if anything that shot around my head in the night might be salvageable for the Story Every Day project or for something longer. Usually I discard everything because it's all jumbled and insane and even if vibrant will lose its color through the day and ultimately reveal its banality, but sometimes, rarely, something seems worth saving. It seems amateurish to carry ideas from sleep to story, though, or lazy, or indulgent. One of the very few emails I've received from a reader was a question about my story "Three Tiny Men," about its origin, how it was created, and I felt like I couldn't tell her the truth, that I pretty much carried its kernel from a dream and modified it to work as a short piece. The technique worked well in that case, I think--the weirdness of sleep balanced well against the mundanity of the narrator's gardening--but more often, I suspect, leads to indulgent, boringly weird fiction. I'd argue that dreams usually make for bad writing even when they're not a source of a story but just an element in it (although there is a great, great scene in Ryan Boudinot's "Chopsticks," in Monkeybicycle 7, in which the narrator describes dreaming that he must perform hand surgery on a friend, which he botches, and which he must present by sobbing, "Welcome to your new hand." This is one of my favorite moments in the issue.)
(mostly) unrelated: Rumjhum Biswas, a writer based in India, interviewed me about the Story Every Day project, and the result went up this morning. YESSSSSSS. We primarily discussed the inspiration for short pieces and the merits (and limits) of very short fiction.
Posted by Tim Dicks