What RPGs have done to me

I have this very weird mix of capability and crippling when it comes to math: I can do the basic stuff blindingly fast, but if it's even slightly complicated, I get lost and make a lot of mistakes. Basically, I'm too literal -- when I was a kid, I had a textbook that tought me addition with apples (if George has 3 apples and Susan has 4, how many apples do they have together?) and I internalized it a little too thoroughly: if it can't be done with apples, I can't follow. Good news is it turns out apples are surprisingly flexible (you can do a fair amount of basic algebra with them) but the bad news is that there's a point where apples become totally useless. And that is the end, more or less, of my numeracy. 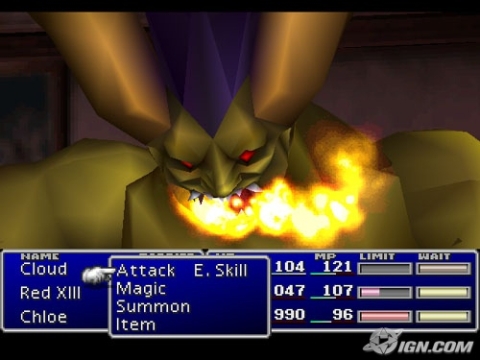 The other sort of math I can deal with is RPG math. Like apples, it has a practical application: you need to be turning a profit at all times in a fight, "profit" being the rate at which you deal damage versus the rate at which you run out of MP for restorative magic and potions. (You can't express this as an absolute number because your HP is not equivalent to the HP of your enemies; one of your points is worth about a hundred of theirs, quite often, because you have fewer, but can restore them more easily.) I've gotten good enough at estimating these sorts of things that I can usually tell you the outcome of any fight in an RPG within maybe four turns. I do my best to avoid leveling up, in most games, because otherwise they're way too easy.
They've gotten this easy because I'm so comfortable thinking about the rates, about the arcs of those numbers -- about the point where my damage output and their maximum life intersects. It becomes about efficiency. How much can I accomplish in one turn? What investments can I make now to improve my profit margin? If I understand anything about business and the economy, it's because of these games.
Strategy RPGs have sort of ruined me, though, by demanding more efficiency. Most RPGs are a bit loose; their numbers have slack. This is much less the case in strategy RPGs, where you must kill more guys, using fewer resources, with far fewer opportunities to cast healing magic. You also have to deal with movement: your characters and their enemies share a grid, usually with different levels of elevation, and in each turn you will manage their positions at least as carefully as you choose their attacks. The worst thing that can happen is wasted movement; walk your character to the wrong part of the map and you'll probably spend the rest of the fight trying to get him back in the thick. 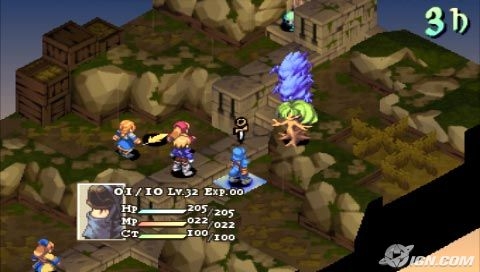 It's irrationally important to me to perform well at these games. And so what I've learned from them is how to accomplish everything in as few "moves" as possible; to minimize the cost of any action by performing it only when it will cost me the least. This sort of thinking can be a talent, but it can also screw you up. I often find it paralyzing.
For instance, what if I need a drink (which means walking to the kitchen) and I also need to go to the bathroom (which means walking down the same hall, but a little less). I could go to the bathroom, come back, get my cup off the desk, go into the kitchen, fill the cup, come back to the living room, sit down and drink from the cup. I know that I'm going to the bathroom first because there's no advantage in getting the drink before I've peed -- I won't want to drink it -- but if I go to the bathroom first, I'll still have to cross the same ground several times, when it seems I should only have to go there once.
Sometimes I solve this by bringing the cup to the table that is marginally closer to the bathroom door, setting it down there, peeing, going back for the cup, going to the kitchen, filling the cup, and returning to my seat. BUT, I'm still crossing some of the same ground several times. So sometimes I sit there on the couch needing to pee and feeling vaguely frustrated for half an hour or so, trying to figure out the right solution.
Recently it occurred to me I could take the cup into the bathroom, and I've done it one or two times, but man, there is something sordid and creepy about bringing an empty cup into a bathroom.
At times this can be weirdly debilitating. I will want to go out and run some errands but I won't be able to figure out the right order to minimize effort, or I will want to begin a task but not know the ideal way, and so I will just sit on the couch and feel like a crazy person.
I guess what I'm saying is: Screw you, Final Fantasy Tactics.
Posted by Mike Meginnis