A String of Terrible Ideas

A few weeks ago I finished most of the edits for a novel, and have spent most of the time since freaking out about the project. I really love it, I love it love it, but should I have included so many robotic dinosaurs? So many ultrapowerful dragonflies that descend and carry humans away up into the dragonskies? Should I have given so much dialogue to the seer who can only gaze into your hazy future by staring into a freshly opened wound in your flesh? So many pages to the nanobots who come together to bandage the cracked Earth before it shatters into several pieces?
Well, of course I didn't actually write about any of that mad gibberish, but now that I type it up it doesn't seem so bad. I think the dragonflies, at least, have potential. But this is the problem with the book I really did write, and the one before, and really with every project for me (and, yes, I'm sure, for everyone, at least some of the time): I can't tell a good idea from a bad one. So much depends on the technique, the way the idea is embodied, and it's hard to see that from the outset.

1) A couple months ago I considered assembling a collection of outdated fast food training videos. I developed this idea after watching one old training video posted to a blog, and then clicking through to another, and another, and another, and another. Despite my long history working in chain pizza delivery, I somehow avoided watching any training videos, and now was fascinated by their terrible narrative qualities. It seems both awful and unavoidable that a training video shot in the late 80s, for example, would feature garish neon colors and a pop-rap song meant to help us remember burger flipping techniques. Imagine being the feather-haired young man slumped in a close-walled back room of the McDonald's you used to sit in with your friends after school, squirting ketchup and flinging pickles at each other, now having to watch a patronizing corporate tool tell another patronizing corporate tool how to most enthusiastically buff a window. Well, the idea of posting a collection of these videos ultimately seemed too sad, but then Saturday, while Sarah and I cleaned the apartment in preparation for our engagement party, I found myself in the kitchen, scrubbing dirt from tile, telling myself not to stop until the floor was so clean that I could see McC.

2) Recently a friend asked if I would like to write the script for a short film to be shot this summer. Yes! Of course! But then as I prepared an email of ideas I began to wonder if our tastes would meet and hug and hang out together. As consumers we enjoy the same sorts of narratives, but as producers I'm not so sure. Because I knew the budget was almost nonexistent, I opened with the most fantastical pitch I could think of: we're on a zero-gravity space station and there's been a mysterious murder! The lead suspects are three shape-shifting holograms. Then I wrote up four actually plausible and thematically unique idea summaries and sent them off but I will be surprised if we're able to get simultaneously passionate about one. This is the hardest part of collaboration for me: forging an initial agreement on the project to undertake. How do you handle this? Do you just toss ideas at each other until one sets you both on fire?

3) My artist friend Dave and I designed a fuel-efficient spring car as an alternative to the standard automobile. The prototype model is a regular vehicle, preferably small, outfitted with large industrial-grade springs. The vehicle is lofted either by an airplane or by elastic propulsion, and then lofted again, once it collides with the ground, by its springs. The passengers, snug inside, enjoy a fuel-free ride across vast distances, as well as a phenomenal and ever-changing view of the countryside, and maybe some motion sickness. We created this car as a way to vex a mechanic friend, but now that I think about it again, I kind of like the idea. All travel should be performed by hurling oneself over the world. 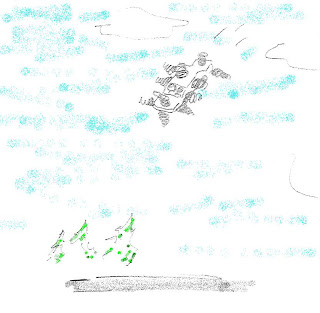