The first TV show "for adults" I remember getting into in a big way was Star Trek: The Next Generation. I remember watching a recorded season finale (or was it the series finale?) on someone else's VCR when that was still a weird, exotic device to me. (We got our first TV when I was five; it was ancient, black and white, had dials instead of buttons.) The most immediate attraction was the fact it was on television, for which I was voracious, and then secondly it was SF, which was kind of my thing. And of course, the sweet, soothing stylings of Jean Luf Picard, the ostensibly French vinyard-raised captain who was clearly a Brit.
I've been watching some of the show again for the last couple weeks in an attempt to relax a little. I've always found it a pretty soothing series -- even at its most exciting, it rarely becomes what I would call "thrilling," and you have the constant, reassuring sense that the regular characters are all basically good people who will do the right thing. This has also been partly motivated by reading Zack Handlen's weekly reviews of the show, which are currently midway through season five. Watching it as an adult brings out some of the show's very real shortcomings (for instance, I'm a little too sure the heroes are always going to do the right thing, which is especially disappointing when the basis of the best episodes is often an ethical dilemma) and it also reveals which members of the cast are, well, vestigial (hint: Troi).
Here are some thoughts on the characters in more or less random order. I will probably divide this nerdy post up into a series.
Geordi LaForge: Chief of Engineering 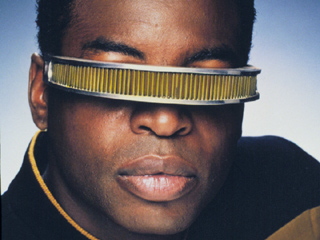 So is he supposed to be French also? I'm not sure. I got a Star Trek uniform for Halloween one year and dressed up as Data one day and Geordi the next, though it was the wrong color (red for command, rather than Geordi's and Data's Lt. Cmmdr. gold). When I dressed up as Data we painted my skin white, so I thought it would be a good idea to paint my skin brown for Geordi. Pretty sure my mother wisely put the kibosh on that one. I used to wonder how the actor could see through his visor, but now -- refusing to do any research -- I suspect there were two visors: one for the rare dead-on shot, which was actually opaque, and one for the more common angled perspectives, which suggests opacity but actually has a number of gaps wide enough to see through. In the movies I think Geordi eventually dropped the visor entirely, because a) why didn't they have something better for blind people in the future? and b) it's hard to act with something that retarded on your face.
Beverly Crusher: Ship Doctor 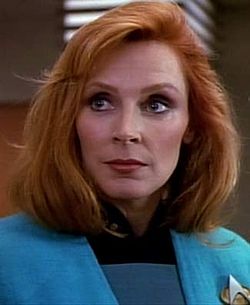 Gates McFadden is a charming actress who was occasionally saddled, like much of the cast, with bad '80s/'90s hair. As a kid I liked watching her, I think because she was the sort of low-key pretty lady I found comforting on television, and because I've always appreciated characters who are good at what they do. Unfortunately, watching the show now makes it clear how little idea the writers had of what to do with their small number of women; Crusher-centric episodes are rare, and not very good. 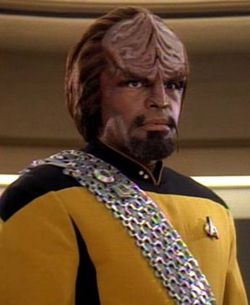 One of the funny things about television, especially science fiction, and especially science fiction from a time when makeup was not quite what it is today, is watching the characters gradually become more attractive. Worf is a prime example: the decision to give Klingons their forehead ridges (an alteration explained to geeks by an extremely implausible virus of some sort) gave the makeup crew a challenge for which they were plainly not prepared. It looks like he's wearing a helmet with hair taped to the back. By the end of the show he looks pretty okay.
Worf has in some ways changed the most profoundly for me since I was a kid, thanks in part to TV Tropes, which has coined the term "The Worf Effect." Basically, Worf is officially the toughest guy on the show, which means that every time they want to demonstrate the monster of the week is scary, it gets to casually kick his ass. The net effect being that you almost never actually see Worf accomplish anything: he is, as far as you can tell, the weakest, most ineffectual dude on the ship. See also the Worf Barrage and Worf Had the Flu.
Commander Riker: First Officer 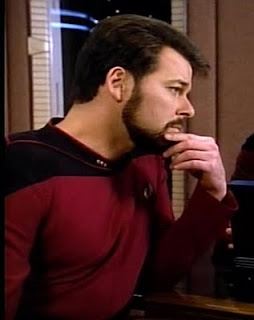 I like Riker better as a meme than I do as a character. He started out as the show's eye candy; Patrick Stewart was always better looking, but he was also bald. His decline as a sex object probably began with a beard that honestly didn't suit him very well, and then continued as he put on weight in a brightly colored future outfit that didn't conceal it very well. The trouble is that the show never figured Riker out much beyond the fact that he was an ostensibly sexy guy and Picard's second in command. He's not a bad character, but his defining characteristics are a sex appeal I never bought and an accompanying smarminess the writers seem to think is charming. The thing about the future of Star Trek is that everyone is better, which includes a general absence of sexual hang-ups. The sort of weirdly ostentatious playboy-ism Riker exhibits in his worst moments only makes sense in a world where people are uncomfortable with sex. So Riker is kind of confusing.
Posted by Mike Meginnis