Right now on the Kindle I am reading Ted Chiang's Stories of Your Life and Others, a book of sci-fi short stories put on the Kindle by the excellent Small Beer Press and originally published (naturally) by Tor, home to much decent science fiction, and often terrible cover art. 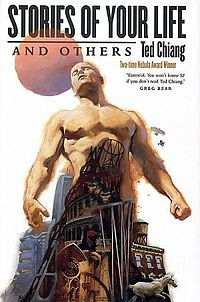 I unambiguously like certain old-school sci-fi: Asimov, Bradbury, Heinlein. I decided to give Ted Chiang a try based not only on the recommendation of someone whose opinions I care about (uh...Owen Pallett), but because it was lauded as pretty story-heavy sci-fi--the kind of sci-fi that foregrounds a character's experience with the unknown and the unnatural, and not just their witnessing of it. It is so far full of imaginary cities and impossible drugs and crazy mathematics and aliens, and, as promised, it does concentrate on the characters' encounter with and ability to deal with these unpredictable situations. These characters aren't Asimov's Powell and Donovan, chucking theories and insults at each other until they get the crazy robot fixed. Chiang's characters will, often, chuck theories--a great many of them, so far, have been some variety of genius--but the stories ultimately come down (often because they're peopled by geniuses) to questions of where one finds a place in his or her mind for the unknown and the impossible, and how much deviation from the normal world a brain or psyche can take before destroying itself and damaging a person's ability to relate to others.
This is not to say that Chiang's stories invest much at all in the sort of psychological realism we expect from Alice Munro, or even a more "literary" sci-fi writer like Philip K. Dick. His stories are unabashed about their genre, and they are extremely straightforward about how these paranormal phenomena affect the characters. When Ted Chiang tells you that a man has fallen out of love with his wife because her thought patterns have changed utterly and he can't access the way she works in order to empathize with her anymore, that is exactly what is happening and exactly the proper explanation for it. People in these stories (again--so far) do not waver in their conclusions, and the world of the stories does not punish them for their confidence. No one, so far, has been exactly wrong--they have made guesses until they arrived at the right conclusion (very scientific method of them). And because no one ends up being wrong, there is no real sense of irony in the stories--no sense that the characters' expectations will eventually be thwarted. I kept waiting for characters to experience reversals in their understandings, to have their worldviews upset, and I had to learn that this was simply not to come. 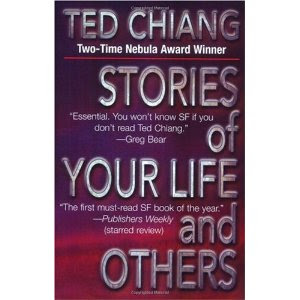 It was the second story in the collection that broke me of this: "Understand." In it, a previously normal guy with a lot of brain damage following an accident receives an injection of a super-drug that massively increases his intelligence. When he grows smart enough to perceive that the military and other government agencies are going to want to use him for their own ends, he mounts a complicated escape plot derived from his sharp intuitions of those who are after him, meanwhile obtaining more of the drug so he can become even more intelligent. After the final injection, he essentially becomes a human computer, an infinitely powerful network of thought and invention. He creates his own language; he works on a design to link human brains to computers. Soon enough, though, he discovers that there is another like him, and that that man is trying to contact him, and will have to be reckoned with if he's going to keep up his genius work. The two meet, and try to destroy one another via telepathic interference. It's revealed that any human has a destruct command, and that another person can invoke it if they only understand the other mind well enough. The main character is fairly secure in the inviolability of his mind, but second superman finds a loophole, and is able to destroy the main character after all.
There's about a million places for irony to take the reins in this story, and I kept waiting for them to take shape. I thought that the main character could be wrong about his level of intelligence. I thought he could be wrong that the government was after him. I thought he could turn out to be designing something very different than new languages and supercomputers. I thought he could be wrong about the existence of this second superman. He wasn't. He was only wrong about the inviolability of his mind, and even this he was pretty equivocal about--he was smart, and he realized it could go either way.
I have been in an MFA, and I have been given largely literary realism to read. If the main character's expectations don't stand to be disappointed or reversed, especially in a first-person story, I become unsure of what to read for. Even in sci-fi, aren't I ultimately reading about minds, about people and systems of understanding, and how the human psychology is revealed by (or asserted in spite of) encounters with the paranormal? I've been struggling with it, and more than once I've thought of putting the book down, and letting it go. 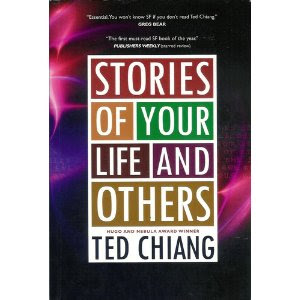 But I kept reading. And I really enjoy reading it. What reading this book, and the above story in particular, has made me realize is that my reading list over the past several years and its emphasis on the necessity of irony has bred in me the habit of fundamentally distrusting a narrator--even of thinking they're somehow dumb, that they have major blind spots that I can see but they can't. Reading Ted Chiang, I've been learning to read for greater immediacy of experience--the ways that the unexpected can affect us now, can change us immediately, not how they can set us up for a fall down the road. In some ways it's a really refreshing take on the universe; it's not nearly so centralized as it is in much mainstream literary fiction. This book does not prioritize the mystery of personality, as Flannery O'Connor would ask--it rarely raises the question of how people get themselves into the scrapes that come to define their lives: work, travels, affairs, divorces, deaths, births. It focuses itself on those experiences which simply visit a person, independent of their influence or input; it presents characters whose personalities have little to do with their predicaments, and can't be harnessed to resolve them. It deals with experiences that are, despite the best efforts of the protagonist, somehow inescapable. Many of the stories so far seem to end with a cry of "Oh"--an I see, whether that new understanding leads to joy or to loss.
I remembered, reading this, the pleasure of coming to an understanding, as opposed to having one's existing understanding undermined. And there is a sense of crisis to coming to an understanding--this style of storytelling is not without stakes. It's just that the stakes come from outside the person, and the responsibility for human feeling, for earnest reaction and response, comes from within. Reading this book has been a good experience for me. It's been good for me to remember that sci-fi generally exists in part to expand our understanding of the universe, and not just of ourselves. How nice that is for a change, to think of how the world works, rather than just how we do. 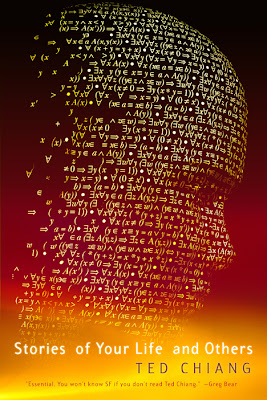