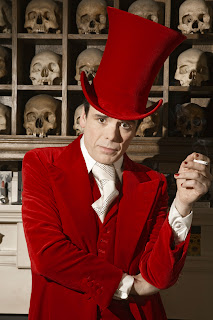 A good friend is teaching an undergrad poetry workshop and it has been something we talk about a lot.  Recently her class has been wanting a lesson on meter and I told her not to do it.  She wants to do it because her students want to learn it and told me "not all poetry is Frank O'Hara and Tao Lin".  I have a lot of reason for disagreeing with her about this and the biggest reason relates to Sebastian Horsley but I'll have to take the long way to get to him, and an even longer way of getting to form as a bad or difficult aesthetic choice.
The way I think about learning to write has a lot to do with learning to dress myself.  When I put clothes on  or buy clothes I always have a reason.  Those reasons are either a way of borrowing from something I've seen in an ad, on tv, or from a friend, a utilitarian function, or a way of standing out.  I do borrow styles from other people.  My haircut is based on this blog about Aaron Levine from over a year ago and I wear white t-shirts based on a weeklong adventure with some good friends where it was part of the uniform, and levis and tennis shoes is an homage to Frank O'Hara's portrayal in a Joe Brainard poem.  I carry a hankie, a folded piece of paper, and three writing utensils (two sided sharpie, fine bp pen, and mechanical pencil) because I find them useful.
When a college sophomore wakes up and goes to poetry class, they make those decisions too, though they will be more or less conscious of it than I am.  They may wear pjs because they like being comfortable and want to sleep longer, they may wear a tight fitting shirt to show off their muscles/boobs, or they wear jeans and a t-shirt because that's all they have clean.  My point is, they make decisions about their attire.  Some of them will be very strict in their attire such as only wearing casual clothes, or always wearing jeans, and some will wear whatever is clean, but these are decisions.
If you ask these students, "if you had to look and dress like someone else, who would you want to look like?" most would say some current celebrity or athlete or mention clothes from a certain retailer.  None would say an older Shirley Temple, Cary Grant or Babe Ruth, even though these people are attractive, interesting people.  We don't want to look like people from a bygone era unless we're going to a costume party.
This is what it feels like to me when I hear students wanting to write in form or learn form in a workshop.  They want to run around with their Robert Frost and Edgar Alan Poe poems when no one in poetry world is writing those poems. If they want to do that, write in a bygone era, they're going to have to have a type of dedication that I don't have and can't effectively teach:  that of a dandy.
Sebastian Horsley took his aesthetic choices seriously.   He even had himself crucified as part of his art.  His appearance and art remind me of John Waters and Lady Gaga.  These people would be less interesting if they let their (avant) guard down and went to Starbucks in their jeggings like Britney Spears (though also an interesting person aesthetically).  Instead they boggle the mind as to what they're like in real life, but real life and art have thin divide when you're this dedicated:
This said, a dedication to form is not something I would or could teach.  I see the undergraduate workshop as a way to show students what poetry is in the 21rst century, not the 19th.  Sure, I'd give them books, tell them who to read if they're interested in form, but I'd be there to show them what poetry is and can be, not the familiar thing that it was.
Posted by Robert Alan Wendeborn